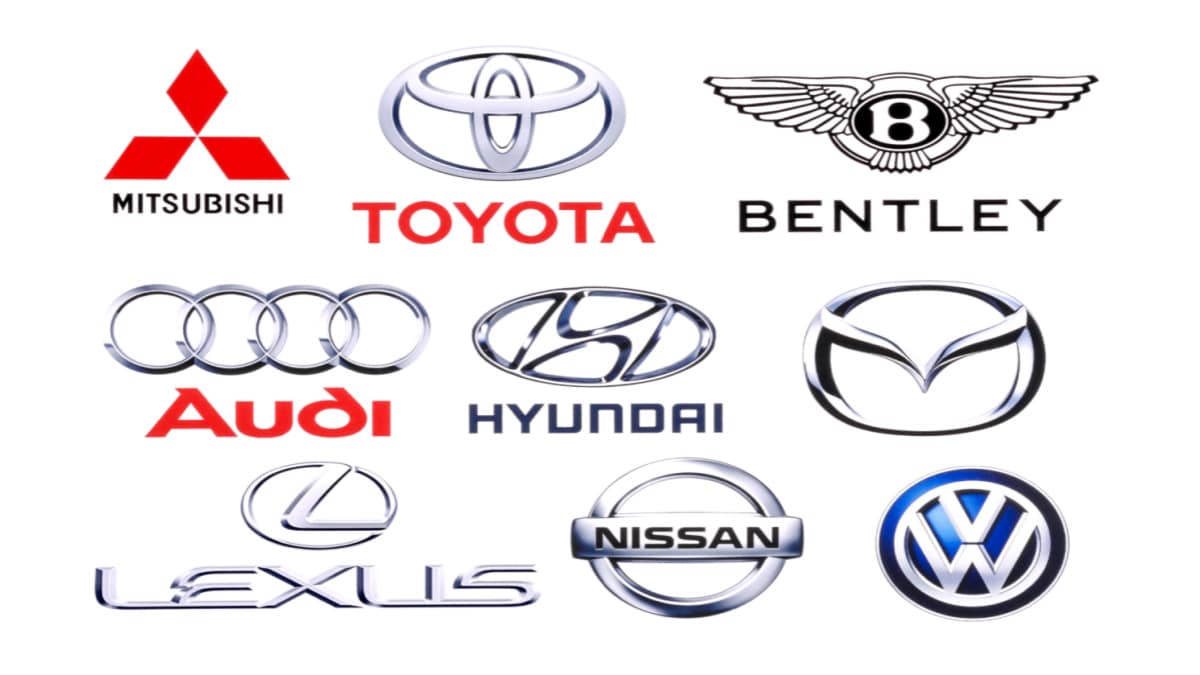 You have gotten familiar with the brands that are American-made, such as Ford, Chevy and Dodge. But, this might leave you wondering what all of the foreign brands are. The only way to properly evaluate all of the vehicles sold in the United States it’s to review a complete list of foreign car brands in the US.

In the United States, the roads are made up of foreign car brands. You have automakers from South Korea, Japan, Italy, Germany, England, Sweden and China selling cars in our country. Many of these companies also have factories planted in the United States.

In this guide, we evaluate the top foreign automakers. We break each company down by the region it’s from and show you what the brand is known for.

One of the original South Korean brands is Hyundai. Its first US-based model was the Excel, released in 1986.

Today, it’s one of the most popular brands on the road. The company has a full lineup of passenger cars and SUVs to choose from.

Kia started selling vehicles in the county in 1992. The first models were the Sportage and Sephia.

By 1998, Hyundai Motor Company took ownership to save the company from bankruptcy. Today, its top-selling model is the large Kia Telluride SUV.

RELATED: Are Kias Good Cars? Are They Reliable?

Genesis is the luxury spinoff of Hyundai. It first debuted in the country in 2016.

Today, you can find a variety of luxury sedans to choose from. The automaker just released the GV60, an all-electric SUV.

RELATED: Are Genesis Good Cars? Are they Reliable?

This automaker has been a top import in the United States over the past few decades. However, it has been selling cars here since 1959.

These reliable cars continue to rate highly. Some of the best options are the Civic, Accord or CR-V.

RELATED: Are Hondas Good Cars? Are They Reliable?

Acura is the luxury brand from Honda. The first vehicle appeared on our streets in 1986.

Today, the luxury lineup contains sports cars, sedans and SUVs. Both the RDX and MDX continue to be the brand’s most popular models.

RELATED: Are Acuras Good Cars? Are They Reliable?

Toyota has battled with Honda to be the most popular. The first model appeared on our streets in 1957.

Today, you can find many top choices, including the Corolla, Camry, Tundra, Tacoma and RAV4. Scion was also part of the company until it was no longer sold.

RELATED: Are Toyotas Good Cars? Are They Reliable?

Today, people are in love with the IS sedan. But, the company’s most popular model is the RX crossover.

Nissan comes from the Renault-Nissan-Mitsubishi Alliance. However, Nissan has been the most popular brand in this union.

It’s the oldest imported brand, with Datsun cars available beginning in 1958. Today, the automaker provides a full lineup of cars, SUVs and trucks.

RELATED: Are Nissans Good Cars? Are They Reliable?

The luxury brand of Nissan is INFINITI. It first arrived in the states back in 1989 with the M30 coupe and Q45 sedan.

Today, INFINITI has a full lineup of luxury cars and SUVs. The QX80 is the flagship SUV option on the roads today.

RELATED: Are Infinitis Good Cars? Are They Reliable?

Subaru has long been known as a company popular for rally cars. The first passenger models hit the United States in 1968.

What you might not know is that Toyota owns 20% of the company, which accounts for some recent collaboration. Today, the company offers a variety of cars and SUVs with standard all-wheel drive.

RELATED: Are Subarus Good Cars? Are They Reliable?

Mazda Motor of America was created in 1960. Originally, it was known for being a leader in roadsters.

The MX-5 is still a popular model with enthusiasts. However, the lineup now includes some economical cars and crossovers to choose from.

RELATED: Are Mazdas Good Cars? Are they Reliable?

This foreign automaker hasn’t been as popular as others, even though it’s partnered with Nissan. We first saw the brand in 1981.

Before that time, Mitsubishi also made cars for Chrysler, such as the Colt. Today, you can find some cheaper models, such as the Outlander.

RELATED: Are Mitsubishis Good Cars? Are They Reliable?

The first model from Audi came to the United States in 1970. It was the Audi 100 LS, but the company has only grown since.

Today, it’s known for the A-series and Q-series. Soon, it’s going to take a leadership position with the E-Tron EV lineup.

The first BMW vehicle hit our roads in 1956. Since then, it’s been a popular luxury brand, constantly battling for a top spot.

The company sells sports cars, roadsters, sedans and SUVs. It might be best known for the M variants, which are high-performance.

We received our first Mercedes-Benz in 1952, but there wasn’t a dealership until 1965. The S-Class led the charge in providing advanced technology and features, but at a cost.

Mercedes also has a spinoff brand known as Maybach. These are comparable to Rolls-Royce level quality.

RELATED: Are Mercedes Benz Good Cars? Are They Reliable?

The first VW appeared in 1949. Very quickly, the Beetle became a top choice for enthusiasts across the country.

However, the brand isn’t as popular as it once was. Still, there are plenty of premium models to choose from.

RELATED: Are Volkswagens Good Cars? Are They Reliable?

Porsche North American opened in 1982. Before that, the Porsche 356 was sold back in the 1950s, with other imports being shipped over throughout the years.

Today, Porsche continues to be known for exceptional performance. There’s a variety of sports cars, sedans, EVs and crossovers to pick from.

Bugatti could be put in the Italian or German brands. The automaker comes from an Italian but was produced in a German town, which is now part of France.

Still, it’s part of the Volkswagen Group, so it seemed most fitting in this category. You still won’t see a lot on the roads because of the high price tag.

While many brands contain an off-road SUV or two, there are no other brands dedicated solely to the market. Land Rover offers these SUVs, but in a luxury way.

It’s been a best-selling brand in the United States since the late 1980s. Today it’s best known for the Range Rover and Defender models.

Jaguar has been in the United States since 1935. It’s first imported model was the S.S. Jaguar.

It’s now in competition with Mercedes-Benz and Audi. Today’s most popular model is actually an SUV, the F-PACE.

What is Aston Martin best known for? It’s been the brand of the Bond car for a long time.

We first saw Aston Martin in the States back in 1990 with limited sales. The popularity hasn’t grown much, but there are plenty of sports car models to choose from.

The Bentley brand is supremely focused on luxury. We aren’t sure when the brand started regularly selling in the US, but the Grand Tourer was on the roads in 1919.

Today, there are three possible models to choose from. The Flying spur is the sports coupe, with the Continental as the sedan and the Bentayga as the SUV.

MINI is a more practical brand from England. Still, it’s unique and fun, giving it an interesting appeal on today’s roads.

The brand’s dealerships have been on these shores since 2002. However, original MINI models were imported in the 1960s.

The United States received its first Rolls-Royce in 1906. By 1921, Rolls-Royce of America was started.

This brand is known for its unique hood ornament, known as the Spirit of Ecstasy. Today, it’s popular for being opulent and unattainable for most people.

The McLaren lineup is one of the most powerful around the world. Its first supercars were sold here in 2011.

Lotus is a lesser-known brand. It’s been in the United States since 2005 but hasn’t grown much over the years.

The sports cars are smaller yet still powerful. However, there have been production issues making it difficult to continue providing options to the U.S. market.

FIAT was first found in the United States back in 1908. The Chrysler Corporation took over the production in 1925.

There was a short break, with the FIAT returning from the 1950s through 1983. It was then brought back after partnering with Chrysler LLC in 2009.

The Alfa Romeo brand came back to the United States in 2015. That’s when the company partnered with FIAT and the Stellantis Group.

It first arrived back with the 4C. Now, it’s best known for the Stelvio and Giulia models, which provide the utmost amount of luxury.

Maserati has been in and out of the U.S. market several times because of financial trouble. However, it’s been back since 2002.

This Italian brand is meant to compete with Jaguar, BMW, Aston Martin and Mercedes-Benz. Today, the company is known for the Levante, the Quattroporte and Ghibli.

Enzo Ferrari might be one of the most known automakers in the world. He’s just as important as Henry Ford in the industry.

Ferrari opened its first US dealership in 1964. Since then, the company has continued to grow in popularity with enthusiasts that want extreme speeds.

The Lamborghini started as a company making farming tractors. It wasn’t long before the automaker tried to rival Ferrari with luxury cars.

It’s unclear when they first arrived in the United States because wealthy residents have been importing them for many years. Today, the best-known models are the Huracan and the Urus.

Volvo has been a brand known for being practical and safe. This Swedish brand arrived on our shores in 1955.

It started as a lineup of wagons and family vehicles. Since then, the company has revamped its style to showcase more SUVs.

RELATED: Are Volvos Good Cars? Are They Reliable?

Polestar began as a Swedish brand, part of Volvo. However, it was purchased by the Zhejiang Geely Holding Group, a Chinese company.

Currently, the company sells the Polestar 2. This four-door fastback is battery-powered and growing in popularity.

Can you buy a European car in the US?

In theory, buying brand new foreign cars hurts America’s economy as a whole. Foreign automakers often build their factories in countries where labor is cheaper than in the United States, so when people buy their cars rather than American-made cars, it costs Americans jobs and hurts our economy.

There is no universal answer to this question, as it depends on what you are looking for in a car. Some people may prefer the durability of a foreign car, while others may prefer the design, performance or features of an American car. Ultimately, it comes down to personal preference.