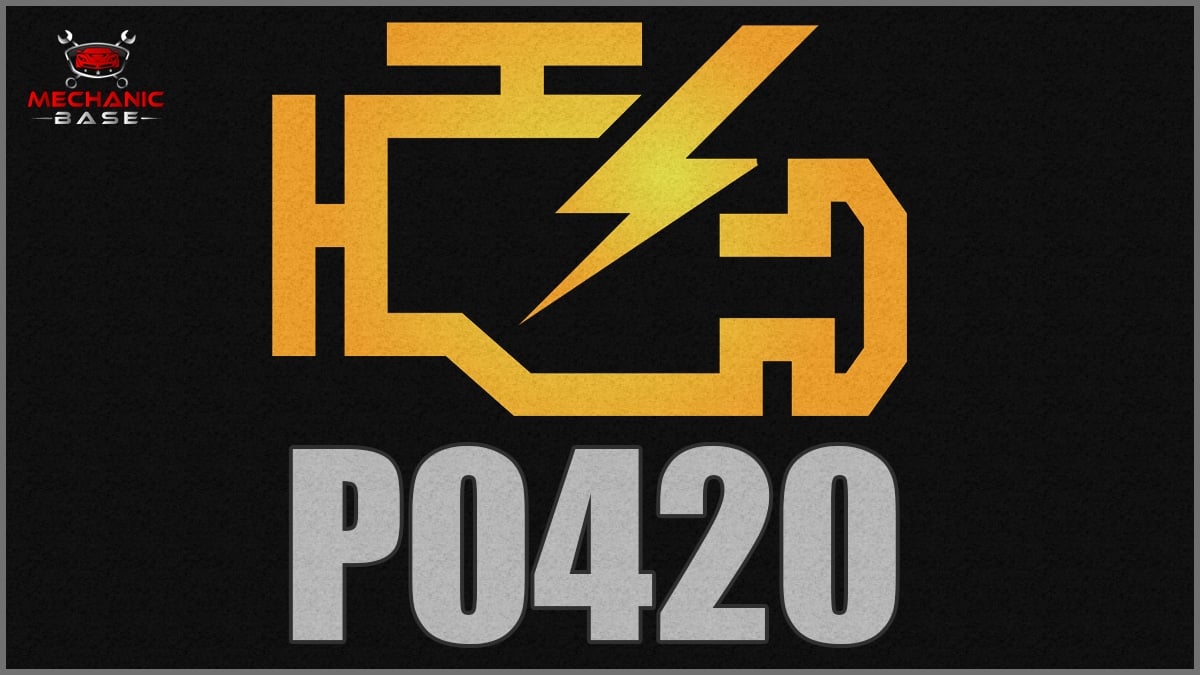 P0420 is a code that is very known in the automotive industry, mostly because it can be so annoying to get rid of. Luckily, this article will help you understand what this error code means, what could be causing it and how to fix it.

We know from experience that P0420 can be quite tricky to get rid of without the right knowledge and one of the main reasons for this is that if you replace a part and reset the codes, it can take a very long time before it reappears.

In this blog post, we’ll answer all these questions and more. Keep reading to learn everything you need to know about the P0420 code.

An incorrect air-fuel mixture can also temporarily or permanently reduce the catalyst’s efficiency, resulting in a PO420 code.

What are some possible causes of a P0420?

It may be a defective bad catalyst, but I have also seen many cases when the catalyst is new but is not an original OEM part. Some cheaper catalysts may not be efficient enough, and it could result in you may need to buy a brand new catalyst from the manufacturer.

I have also seen non-OEM catalytic converters that have been installed too far away from the engine on the exhaust pipe towards the last muffler. Because of this, the catalytic converter will not become hot enough and it will trigger the P0420 trouble code.

If the car’s air-fuel mixture is incorrect due to a faulty injector, high fuel pressure, faulty fuel system, or a damaged sensor, it may cause the catalytic converter to not function properly.

The main causes of the P0420 code include:

You should first check the function of the catalytic converter with the methods further down in the article before replacing any parts. You will most likely waste your money by just replacing parts, so it is much better to make a proper diagnosis. However, here are some things that could fix the error code P0420:

The most common symptom of code P0420 is a check engine light on your car’s dashboard. In rare cases, you may also notice issues like misfires, higher fuel consumption, or a bad odor smell from the exhaust pipe.

However, In most cases, you will most likely not notice any symptoms except the check engine light with the P0420 code stored in the engine control module or powertrain control module (PCM).

Low – The P0420 code will in most cases not create any further problems with your car’s engine.

However, the P0420 trouble code could result in worse emissions from your car, which is bad for the environment, so you should therefore fix it as soon as possible.

What are the common P0420 diagnosis mistakes?

The most common mistake is replacing the oxygen sensors without diagnosing them properly. The cause of this engine code is in most times the catalytic converter – which may get damaged by other issues with your car’s engine like misfires or a rich or lean air-fuel ratio.

If you find DTC codes like P0171, P0172, P0174, or P0175, it means that your engine is running rich or lean. This could be due to a faulty fuel injector, high or low fuel pressure, MAF sensor, engine coolant temperature sensor, or almost any faulty engine sensor. The air-fuel mixture needs to get addressed and then see if the P0420 code comes back.

In some cases, if there are no other issues with your engine, you can try to use a catalytic converter cleaner before replacing the catalyst. There are many different additives on the market, so we recommend choosing one of the best catalytic cleaners from our list.

P0420 trouble code is more common in some car models than others. These car models are known to have a problem with this diagnostic trouble code. Here is a list of the most common causes by car brands.

Remember that these are only general guidelines, and you should make a diagnosis before replacing any parts.

If you experience a p0420 code in your chevy it is often due to an exhaust leak before the catalyst. It can also be caused by a faulty downstream oxygen sensor (rear) or a faulty catalytic converter.

Chevy engine’s are known to leak around the exhaust manifold so you should definitely take a look there if you can find some strange blowing sounds when your engine is running.

The most common cause for P0420 in Toyota and Nissan cars is a bad catalytic converter. You may also ensure your engine is not burning motor oil.

Check for vacuum leaks and exhaust leaks first. Then check to see if you notice any blue smoke coming from the exhaust pipe. If so, it’s a sign that you might have an issue with the crankcase ventilation or even something as bad as a damaged turbocharger or bad piston rings.

If you do not notice any blue smoke at any RPM, it is most likely your catalytic converter is worn out. You may find similar issues on Nissan cars.

Ford engines often have vacuum leaks or a broken solenoid for the EGR or other components, which causes a faulty air-fuel mixture and then causes the trouble code.

Check the code memory with a diagnostic scanner to see if you can find any trouble codes about the air-fuel mixture. If everything looks fine, check for exhaust leaks.

Diagnose and replace the catalytic converter if you can’t find any trouble codes or other problems with the air-fuel mixture.

If you find a P0420 code in your Subaru or Honda, it’s most likely the catalytic converter to blame. It can also be caused by an exhaust leak or a bad oxygen sensor.

These VAG cars have some known problems causing the P0420 trouble code. Check the check valves’ function under the intake and ensure the crankcase ventilation is free from dirt, causing the engine to burn oil, which clogs the catalytic converter.

Check for exhaust leaks around any flex pipes on the exhaust pipe (common cause) and check for any engine codes related to the oxygen sensors. If no problems were found, replace the catalytic converter. It’s a widespread problem on both the 1.8T and the V6 petrol engines.

P0420 is usually caused by a faulty catalytic converter, as mentioned before. You should always diagnose it properly with the methods below before replacing any parts.

What could damage the catalytic converter?

The catalytic converter reduces the three main causes of pollution produced through gasoline combustion – Nitrogen oxide(NOX), carbon monoxide, and hydrocarbons. It does this by converting these harmful substances into less noxious ones that are easy on our health and contribute to clean air quality!

There are a few things that are known for damaging the catalytic converter, which can cause trouble code; here are the most common:

There is no fixed cost to fix the P0420 code, due to the number of different causes. However, it is often caused by a faulty catalytic converter, which usually costs between 500$ to 1500$.

The estimated cost of repairing the code is the following. The prices include parts and labor work at a workshop. The costs do not include diagnosis costs.

You cannot just remove parts to fix this trouble code, because it will likely give you another trouble code or other issues. But, you could reprogram the engine control unit to remove the catalytic converter’s monitoring system. Still, it’s not recommended because it will be illegal in most countries and states.

There is also another way to trick the engine control module by installing the rear oxygen sensor inside of a small pipe. This method can work if you desperately want to get rid of the P0420 code, but it’s not a recommended method, and it may get you into trouble.

Yes, you may be able to drive your car with a P0420 code, but it is not advisable. This code indicates that your catalytic converter is not functioning properly, which can lead to increased emissions and decreased fuel efficiency. In some cases, driving with a faulty catalytic converter can damage other parts of the engine. If you have a P0420 code, it’s best to get it fixed as soon as possible.

If your P0420 code is being caused by a failed O2 sensor, that will cost around $100-200. However, a failed catalytic converter can cost over $2000, so it’s important to diagnose the root cause of the P0420 code before proceeding with any repairs.

To clear the P0420 code, you must use an OBD-ii scanner. Remember that clearing your P0420 code will probably only temporarily solve your problem. To fix it permanently, you need to fix the underlying issue.

In conclusion, the P0420 code indicates that the engine control module recognizes a problem with the catalytic converter’s efficiency.

Code P0420 can either be caused by a bad catalytic converter with low efficiency or a false alarm triggered by a sensor such as the downstream or upstream oxygen sensor. It can also be internal oil leaks that cause the catalyst to clog up, which will result in reduced efficiency.

I hope you now have the knowledge to understand what the PO420 code is and how to get rid of it. If you liked this article, don’t forget to check out our other articles and our YouTube channel!