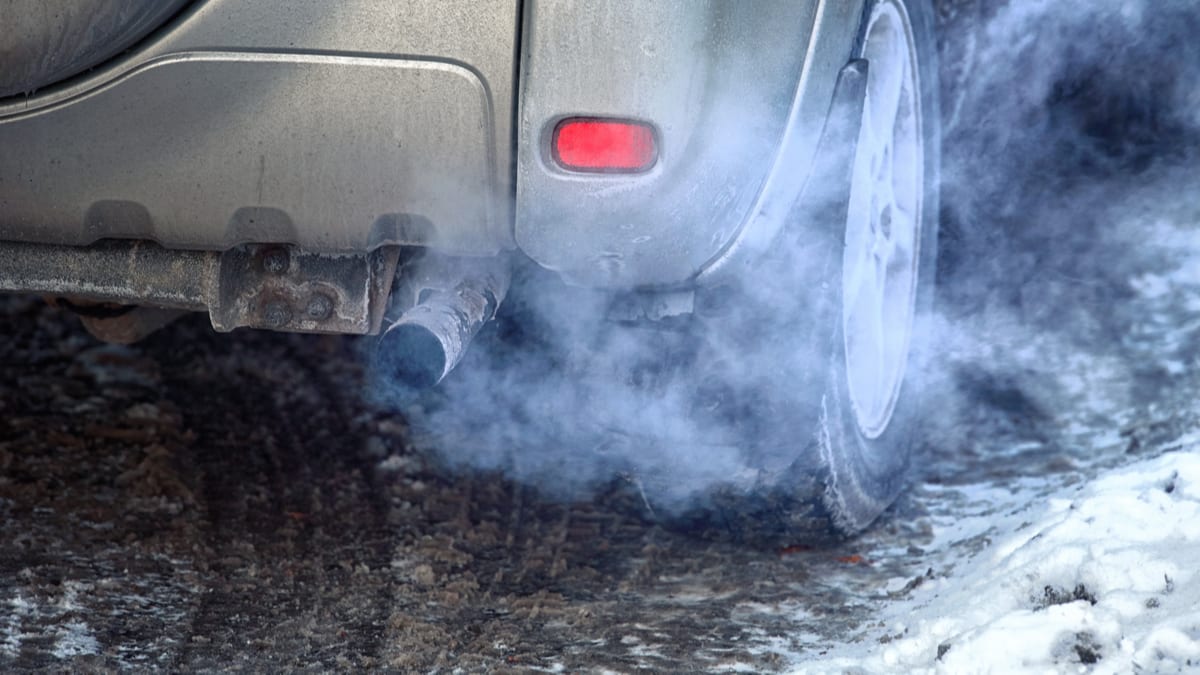 Car exhaust can tell you a lot about the condition of your vehicle. Whenever everything is running optimally, the exhaust should resemble a thin white or very light cloud of water vapor. If you are noticing blue smoke from the exhaust, it’s a sign that something is wrong.

We review some of the top causes of blue smoke from the exhaust. Our article also gives you some practical tips to resolve the problem once and for all.

What Are The Causes of Blue Smoke from the Exhaust?

Blue smoke from the exhaust means that the engine oil mixes with gasoline in the combustion cycle. It can also be caused by oil dripping onto hot engine parts. In some cases, blue exhaust smoke is a sign that a part has failed, such as the turbocharger or PCV valve.

When blue smoke is present, it means that oil is burning up and coming out of the exhaust pipe with the burned fuel. Whatever is causing it, the vehicle is operating inefficiently and should be repaired.

Here is a more detailed list of the causes of blue smoke from the exhaust:

1. Oil in the combustion chamber

As the engine ages, piston rings, valve seals and other vital components start to wear out. Wear occurs faster if you fail to perform regular oil changes because contaminated oil is less effective at reducing friction.

If the valve seals become cracked and brittle, it is less likely to keep the fluids separate. That’s when oil starts to mix with the fuel in the combustion chamber.

Blue smoke coming from the exhaust often indicates that there is oil in the combustion chamber. Sometimes, this is caused by worn out piston rings, which means you may need to replace the engine.

RELATED: Black Smoke From Exhaust – Causes & How to Fix it

If the turbo has blown out, there is a possibility for blue smoke out of the exhaust. A blown turbo can mean one that is damaged, but it also could be caused by a leaking oil seal.

In either situation, oil seeps into the engine. Once the oil has infiltrated the engine, it mixes with fuel to create blue smoke.

Piston rings are created to keep the engine oil where it belongs in the combustion chamber. When they fail, the oil can flow into the wrong area.

As the oil mixes with the fuel, it can create blue smoke. Sadly, replacing piston rings can become very expensive.

If something is wrong with the vehicle and hot oil is escaping out of the engine, it’s possible that it is making contact with hot parts under the hood. As you accelerate, you might notice blue smoke coming from the back of the car because of the oil hitting the engine block. While this isn’t actually coming from the exhaust, it might look like it is.

Oil can drop from a blown gasket in the engine block. When it seeps through, it makes its way onto the hot exhaust, leading to blue smoke. Additionally, it could leak onto the headers, also causing blue smoke.

If the smoke is coming from under the hood when you aren’t driving, it’s a telltale sign that oil is leaking. Sadly, when the head gasket is leaking, you may also need to have a cylinder head replaced.

The Positive Crankcase Ventilation (PCV) Valve can also cause blue smoke from the exhaust. This valve is responsible for releasing the pressure that builds up in the oil pan. Pressure is routed into the intake manifold, so fumes can be reburned.

When the PCV valve is stuck, oil mixes with air and other gases. Because the intake manifold is also connected to the air filter, it can lead to blue smoke.

How to Fix Blue Smoke from Exhaust

The simplest fix is to remove some oil from the system. This fix only works if the blue smoke occurred directly after performing an oil change.

It’s possible that there’s too much oil in the system. This condition causes aeration and pressure, making it harder for the engine to properly deal with the heat and friction. To resolve this issue, just remove enough of the oil so the levels are correct.

RELATED: White Smoke from Exhaust – Common Causes & How to Fix it

If the engine hasn’t been cleaned in a while, it’s time to take a look at it. When dirt gets stuck in the engine, it can clog the oil return holes in the cylinder head, causing a leak.

Remove the valve cover and clean off any debris that you see. You also want to clean out the drain back holes. Wipe down the engine to ensure there is no oil left behind that could cause blue smoke.

As you clean off the engine, it’s a good time to inspect it. If you notice an area where oil might be leaking, fix the problem immediately.

Damaged piston rings can create blue smoke, but this isn’t a problem that’s easy to deal with. While the piston rings might only cost about $50 each, the labor is what causes the bill to get so hefty.

The engine must be removed and disassembled to get to the rings. Expect to pay $1,000 or more until the entire job is completed.

If the turbocharger is blown, you must stop driving immediately. Driving a car with a blown turbo can lead to much bigger problems.

In fact, metal bits can form because there is no lubrication in the turbocharger. This metal can make its way into the engine, leading to permanent damage.

It doesn’t cost a lot to replace the PCV valve. Plus, the job is straightforward. Identify the tube that is connected from the intake manifold to the valve cover and follow it until you find the PCV valve.

Take off the valve and replace it with a new one. As long as you put the new valve in the right spot, everything will work as it should, hopefully fixing the blue smoke condition.

Unless you have some mechanical knowledge, you don’t want to try fixing the valve seals on your own. You will need some special tools and a little finesse to get the job done right.

To replace the valve seals, you must take out the spring from the rocker arm and valve. Lift the valve seal up and replace it with a new one. Whatever you do, don’t drop the valve into the engine, or you will have bigger problems on your hands.

Driving with Blue Smoke from the Exhaust

In some cases, it’s okay to continue driving with blue smoke coming out of the exhaust. However, you want to make sure you know what the problem is before you make it worse. If the turbocharger is blown or oil is mixing with the fuel, you want to stop driving and have the issue fixed.

Letting problems continue only leads to more expenses later. If you need to replace an engine because of damage, the cost might be $3,000 or more, which is something you don’t want to deal with.