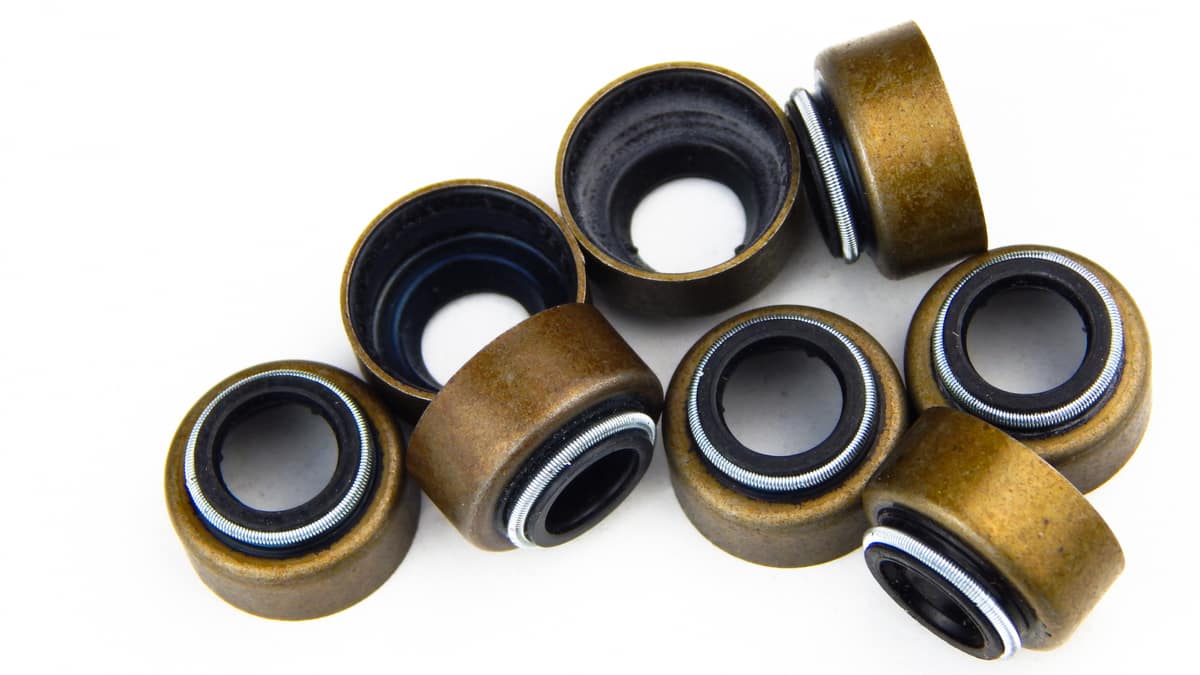 A vehicle has about 30,000 functioning parts, both large and small. With so many parts, it should come as no surprise that some parts wear out over time and need to be replaced.

The highest concentration of wear in a vehicle is found in the engine. As the engine heats up and generates a lot of pressure, some components inevitably lose their integrity.

Valve seals are one such component that can be affected by the heat and pressure of an engine after a long time.

The valve seals are vital to holding the engine oil and the car engine’s pressure on separate sides. It is not very common with bad valve seals in modern engines, but it happens. Let’s take a quick look at the signs to look for.

Symptoms Of A Bad Valve Seal

The most common symptom of bad valve seals is blue smoke from the exhaust pipe. You may also notice oil on the spark plugs if you inspect them. External oil leaks, bad fuel consumption, or rough idling are other signs to look for when your valve seals are bad.

Here is a more detailed list of the signs of a bad or failing valve seal to look for:

The most common symptom of a bad valve seal is blue smoke from the exhaust pipe. This can either be caused by a leak of the intake valve seal, which causes the engine to consume and burn oil inside the combustion chamber.

It can also be an exhaust valve seal leaking, which will push oil directly out to the exhaust pipe, causing it to evaporate.

As the problem worsens, the smoke becomes worse and worse. You will notice that the blue smoke lasts longer than before and does not disappear even at high speeds.

If you recently replaced your spark plugs and noticed that it was some strange clay on the spark plug tips – it is most likely coming from burnt oil after the combustion.

This oil will burn into the spark plug and cause clay, which will stay there. This oil is most likely coming from a leaking intake valve sealing or a failed turbocharger.

As we discussed before, both a leaking intake or exhaust valve will cause the engine oil to pour out into the exhaust pipe.

A normal engine contains around 4 liters of engine oil, and if you keep driving your car with leaking valve seals, you may notice the oil level going down.

If you notice bad oil consumption together with any of the other symptoms here, it is a good time to give your car to a mechanic for a look.

If you have a turbocharged car, the turbo pressure can go past the intake valve seals if worn, which causes the pressure in the crankcase house to increase.

Increased crankcase pressure can result in external oil leaks from different engine sealings and even cause sealings to pop out completely from the engine.

A defective valve seal is easily noticeable when your car is idling. The car engine is often susceptible to holding a steady low, idling RPM.

Because of this, when a valve seal is bad, and there is oil going into the combustion chamber, you might notice rough idling or even stall sometimes.

It can also be caused by oil clogged on the spark plugs, caused by bad intake valve seals.

If you experience rough idling together with blue smoke, it is definitely time to check your valve seals.

The valve seals can also be so bad that the valves, spark plugs, and catalytic converter gets clogged with burnt oil.

This can cause a heavy performance issue with your car, and it can feel much slower than usual, especially if your catalytic converter is clogged.

The Function of a Valve Seal

The valve seal aims to separate the intake flow and the exhaust flow entering the crankcase. It is also vise versa – for not letting oil going into the cylinders and out through the exhaust.

The valve seals are made of a metallic outer ring and a high heat-resistant rubber sealing against the valve.

Valve seals rarely go bad on modern engines, but it can happen in some rare cases.

The valve seals are located in the cylinder head, under the valve springs, installed around and sealing the valves.

This can, of course, be very time consuming, and it can take a lot of hours to replace the valve seals.

If you can do the job by yourself, you can do it cheaply because the cost of the valve seals is pretty cheap – it is the time to replace them that costs.

Worn valve seals are not a very common problem and since the high replacement cost – do proper research before you want to replace the valve seals.

The main symptoms of a bad valve seal include: