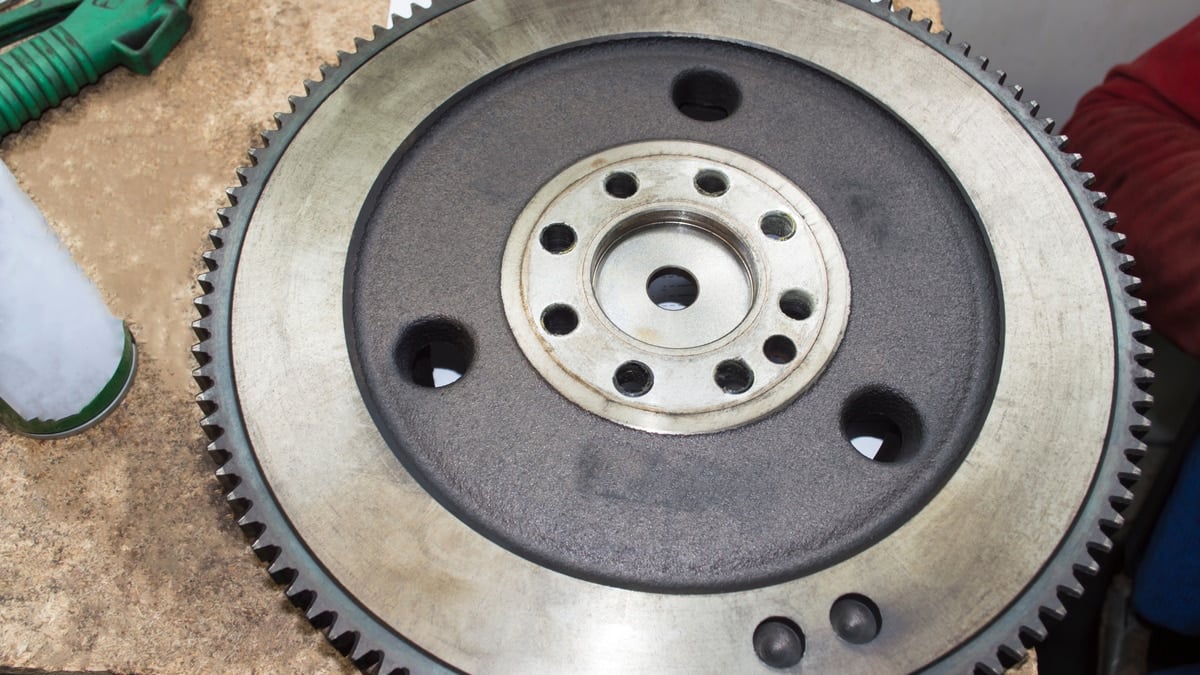 A flywheel looks like a simple part of your car, but it actually has many purposes, especially in more modern car models.

If you suspect that your vehicle’s flywheel is wearing out, you need to replace it as soon as possible before the problem worsens and starts to affect other components in your vehicle.

But what is a flywheel, and how do you know when it’s wearing out? We’ll break it all down below. Let’s begin with the signs to look for.

Symptoms Of A Bad Flywheel

While there are not all the possible signs, it’s the most common ones. Here is a more detailed list of the signs of a bad or failing flywheel to look for:

If you have a double mass flywheel, which many modern cars have, you will probably hear a lot of noise from the transmission when your engine is idling. This can be identified as loud bangs.

This does only happen if you have a double mass flywheel on your car model.

However, another potential cause is a warped flywheel. While it’s not the most common cause, it’s definitely something you need to look into.

Gear Slippage can happen if the surface where your clutch is attached is very worn or got a bad surface. Gear slippage happens when you shift to a higher gear and the engine RPMs increase, but the wheels’ speed stays the same.

The longer you let the problem go on, the more likely it is that you’ll need to replace both the flywheel and the clutch!

All around the flywheel, there are teeth. These teeth make up the starting ring, and it’s what your starter connects to turn over the engine. Over time these teeth can break, and when the starter tries to engage with these broken teeth, you’ll hear a grinding noise.

If the teeth are the problem, once you try again it should start. With broken teeth, it’s an intermittent problem that will worsen the longer it takes you to repair it. Even worse, it will lead to damage on your start if you leave it unaddressed for too long.

While the most common cause of a burning clutch is improper use, if you’re doing everything right then, it’s a sign of a deeper mechanical problem. If you smell a burning clutch, you either need to reevaluate how you drive or replace the clutch or flywheel.

While it’s unlikely that a broken flywheel would be the cause, it’s not impossible either. If you’re having trouble shifting gears, it means your flywheel is extremely warped, and you’ve probably had some problems you’ve been ignoring for a while.

Furthermore, it’s doubtful that your only problem will be the flywheel if you’re struggling to shift gears. If the problem is bad enough, you might end up needing a new transmission too!

The flywheel serves four main functions for your vehicle. Those four functions are:

The first function of a flywheel is to keep the engine in motion even when you stop accelerating. It’s why the flywheel has to be significantly heavier than a flex plate. Because while an automatic engine has a torque converter, a manual one does not. The flywheel servers this function.

From there, it provides a natural counterweight to the crankshaft. This counterweight is built right into the flywheel, which is why it’s so crucial that you get a vehicle-specific flywheel for your vehicle.

Your vehicle’s flywheel is always located towards the engine’s rear, directly between your engine and transmission. The housing completely encases the flywheel, so you won’t see the whole thing unless you remove the engine’s transmission.

However, you can typically view a portion of the flywheel through an access port or remove the starter. But to fully remove the flywheel and replace it, you’ll need to disconnect the transmission to get access fully.

You need to consider two main factors when getting a quote for a flywheel replacement, the parts and the labor. A flywheel typically costs anywhere from $60 to $1000 depending on what you drive, and if you’re getting an OEM replacement part, it might cost even more!

From there, you need to factor in the labor costs. Considering it usually takes about eight hours to replace a flywheel, you can expect to spend another $400 to $1500 in labor alone!

Of course, if you can replace the flywheel yourself, you can do the job for less than $100 on smaller vehicles and just under $1,000 on some of the more expensive automobiles out there.

Just keep in mind that replacing your vehicle’s flywheel isn’t the most straightforward job out there. Not only is it a technically complicated task, but you’ll need access to a wide variety of tools, including a transmission jack, to get the job done.

While you can save a ton of money by doing it yourself, it’s not worth the frustration and potential damages if you don’t know what you’re doing.

The main symptoms of a bad flywheel include: