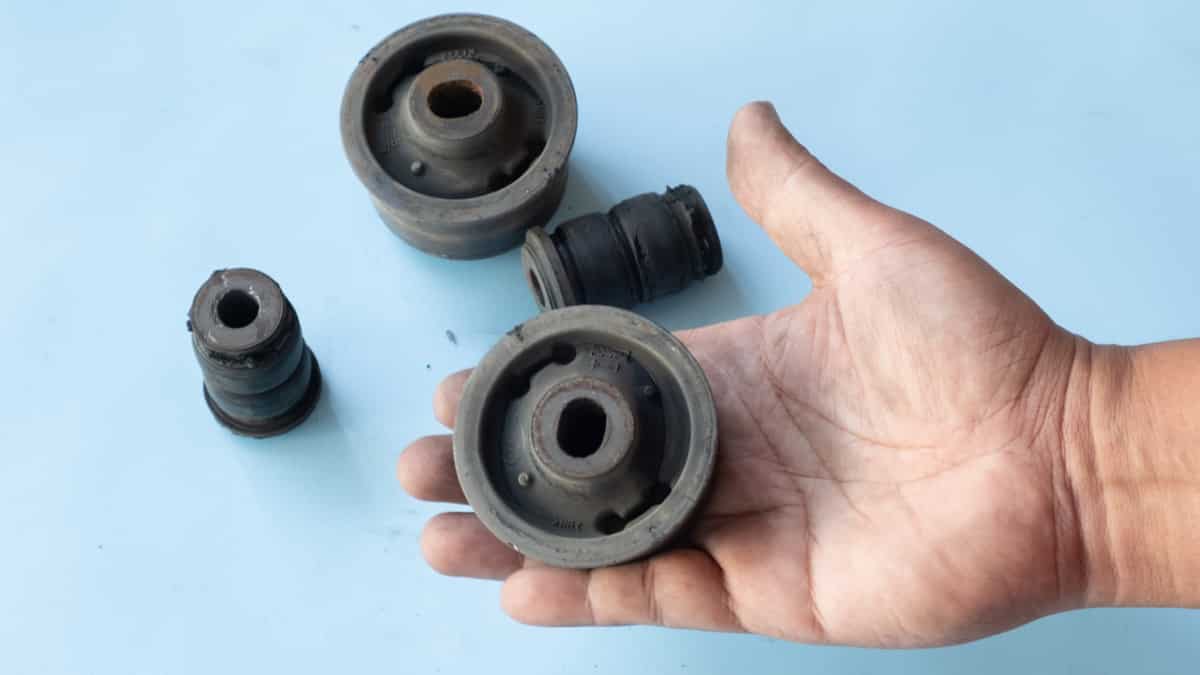 There are some small parts that car owners never think about, but can really mess up the driveability of your car. One of them is the control arm bushing.

In this article, we look at the symptoms of bad control arm bushings, location, function, and the replacement cost if you need to replace the bushings. Here’s a quick look at the common signs.

The most common symptom of a bad control arm bushing is losing the stability of your car at higher speeds. You may also notice signs such as uneven tire wear or trembling steering. In some cases, you may also experience a vibrating steering wheel.

Here is a more detailed list of the signs of a bad or failing control arm bushing to look for:

1. Your car’s stability level has dropped

As the control arm bushing keeps the two metal sleeves nice and tight, the sleeves get a little play when they become worn, as they move and vibrate when the car is moved.

Since the control arm is connected to the wheels via the outer sleeve, the movement in the control arm can obstruct the wheels so that they have less surface contact with the road than the other side, which leads to uneven wear of the front tires.

As mentioned earlier, when accelerating from a dead stop, you may notice that the steering is wobbly and the front of the car tends to shake and jitter when you turn the car at a considerable speed or press the brakes. This is due to the fact that the control arm bushing has too much play and not holding the wheel in place correctly.

4. You experience a decrease in braking performance

Although the control arm bushings have no direct connection to the brake system, they do influence the braking of the vehicle. If the control arm bushings in a car have become bad, braking may not be affected profoundly, but it can sometimes become unstable, so that the front end of the car bounces back and forth due to inertia when the car tries to stop.

This can cause further problems in the future, and the additional vibration it causes can cause other parts to come loose or even break off.

If your steering wheel tends to vibrate when turning or braking, poor control arm bushings are likely to be the culprit, as they do not alleviate the slight vibrations that occur when turning and steering while driving.

This rubber does not only do this, but it also dampens a car’s vibrations from shocks and minor jolts. The effect of rubber, which softens and absorbs vibrations, is better than springs, considering its location.

The rubber bushing also ensures the parts’ lubrication, as it often contains the grease to ease the friction. The metal sleeve coming from the inside of the suspension is connected to the vehicle frame through a central rod. The outer sleeve is connected to the wheels at both ends so that the two sleeves can move independently at the ends. For this reason, the control arm bushing and the control arm are subjected to a great deal of stress during the movement and rotation of the car. Over time these bushings become hard and start to crack, which can cause some problems.

The Control Arm Bushing is located on the control arm, bolted on the vehicle frame side.

The control arm is the arm located at the bottom of the suspension in the front suspension. If you have a 4WD, you may also find it in the rear suspension, depending on the suspension type.

Replacing the control arm bushing or even the control arm itself is not difficult, especially if you have some knowledge about cars and their suspensions. The control arms don’t break as often as their bushes, and if it is possible, it can be worth replacing only the bushing.

If you are not among those who are familiar with repairing your own car, you can take your car to a mechanic to have it repaired.

It is advisable to immediately replace the control arm bushings, as any delay in the repair can cause additional wear and tear on the suspension and other parts.

The main symptoms of a bad control arm bushing include: