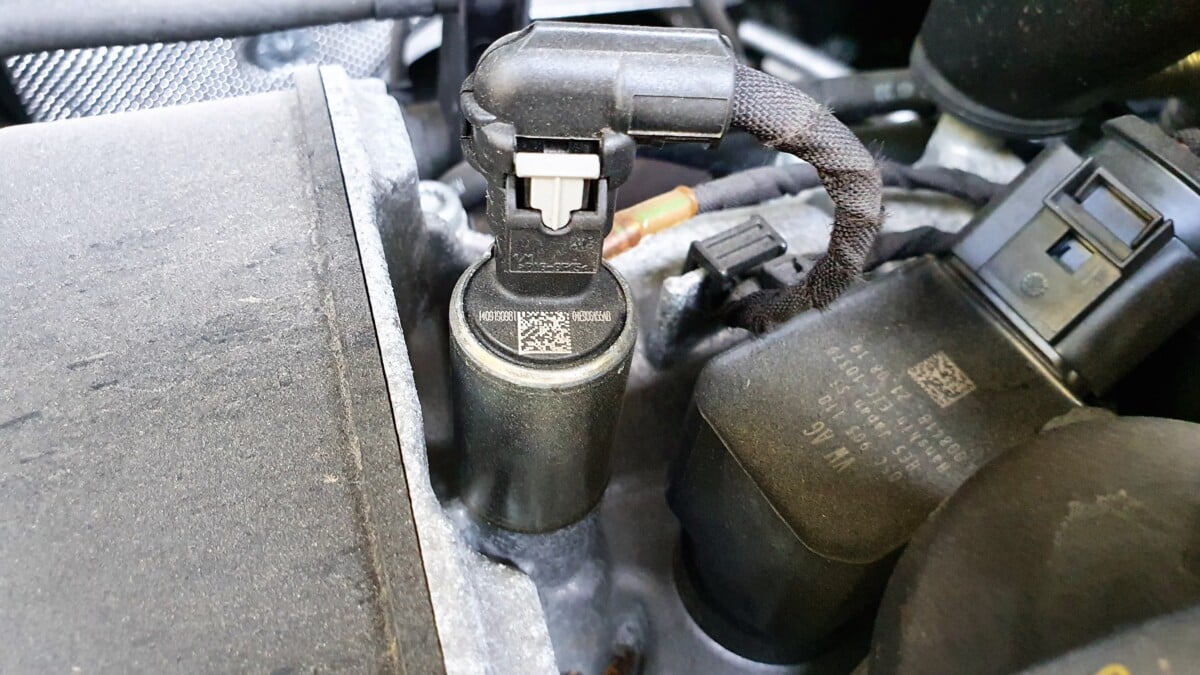 Variable Valve Timing (VVT solenoids) or so-called oil control valves are one of the greatest innovations in the automotive industry.

They help combustion engines to increase performance and increase efficiency.

Unfortunately, these VVT solenoids can also fail, which can result in some expensive repairs.

In this article, we will discuss the common signs of a bad VVT solenoid, its location, and the replacement cost if you have to replace it. Let’s begin with a quick overview of the most common signs.

The most common symptom of a bad VVT solenoid or oil control valve is a check engine light on your dashboard. You may also notice issues with the performance, like rough idle, rough acceleration, increased fuel consumption, or low engine power.

Here is a more detailed list of the signs of a bad or failing oil control valve to look for:

With the help of the Electronic Controlled Unit (ECU), with which modern new vehicles are equipped, you can notice any unusual activity going on in your vehicle via the check engine light.

Your ECU monitors compare and report any activity going on in your car. If one of the current situations is not compatible with the predefined values, the check engine light comes on.

As a result, when the VVT solenoid is not working properly, the check engine light will come on your dashboard.

The VVT solenoid adjusts the camshaft timing when your car is running at idle. This is because the idling should be as smooth as possible. A very retarded camshaft timing will make it very difficult for the engine to not drop too low on RPM and stall.

If you notice strange idling problems with your car, it can be because of a faulty VVT solenoid.

The main purpose of the VVT solenoid is to adjust the camshaft timing so you will have effective and smooth engine operation at all different RPMs. If it fails, you may find it causing your acceleration to become rough, and it might even cause misfires when accelerating.

If you have rough acceleration together with a check engine on your dashboard, it could absolutely be due to a faulty VVT valve.

Any malfunction of the VVT solenoid is therefore certain to result in efficient fuel consumption. So if you notice a significant drop or increase in your average fuel consumption and smell of unburned fuel, it is very likely that your variable valve timing sensor is defective.

The VVT solenoid was innovated to increase the power on higher RPMs while keeping a steady engine performance at lower RPMs. Therefore, a faulty VVT solenoid can cause the performance to drop a lot if it does not advance the camshaft timing during acceleration.

Almost all modern cars use VVT technology to improve their performance and fuel economy. The VVT solenoid helps engines change their valve timing, ensuring that the performance is at its top without losing driveability on lower RPMs.

Electronic principles of electromagnetism in the form of a solenoid valve control the oil flow to the camshafts. The engine control unit sends power and ground to the VVT solenoid when it is time to open the solenoid and adjust the camshaft timing.

The VVT solenoid is almost always located in the cylinder head near the camshafts. It is most often located at the intake side because VVT is often only installed on the intake camshaft in most car models.

If your cat have VVT on the exhaust camshaft also, you might have two VVT solenoids.

In some car models, the VVT solenoid is located on the inside of the valve cover, which definitely makes it more difficult to reach.

With VVT solenoids, there is a large price variance depending on the car you have. For some car models, you have to take half the engine apart; for others, it can be replaced within 5 minutes. You will find detailed information in your repair manual.

Can you drive with a bad VVT solenoid?

While you could drive your car even if its VVT solenoid is faulty, this will not be a pleasant experience. Depending on the situation, this failure will cause various running issues, such as rough idle or poor acceleration. Whatever the symptoms, the engine will not run at its optimal level, increasing fuel consumption significantly. And in the long run, unattended VVT issues may lead to additional engine damage.

Can a bad VVT cause engine knock?

Yes, the engine may start knocking and pinging if one or both of its VVT solenoids fail. This will happen if a VVT malfunction causes the air-fuel mixture to become so lean that it pre-ignites during the combustion. Pre-ignition is severely damaging, so you shouldn’t drive your car if its engine is knocking.

It’s highly possible for the VVT system in your car to malfunction if the engine oil level is low. The same might happen if the oil quality is insufficient, or if it hasn’t been changed for a long time. Variable Valve Timing, or VVT, is a hydro-mechanic system, whose operation relies on pressurized engine oil. Because of that, even the slightest deviation in pressure or flow may interfere with the VVT solenoid’s operation.

Does the VVT solenoid affect idle?

By adjusting the airflow through the engine, VVT solenoids affect its whole rev range, including the idle. So, if the VVT solenoid fails, the idle might become rough or, in more severe cases, it may cause stalling. This happens when the camshaft timing is too retarded, which lowers the idle speed too much.

What happens when a VVT solenoid fails?

Because it affects the operation of intake and exhaust valves, a malfunctioning VVT solenoid will reduce the airflow through the engine. This can cause various running issues, including rough idle, poor acceleration, or reduced engine performance. With any of these symptoms, the engine will not run at its optimal level, which increases fuel consumption.

Variable Valve Timing, or VVT, is one of the greatest innovations naturally-aspired engines received in decades. By adjusting the camshaft timing, this hydro-mechanic system increases the engine’s efficiency and makes its operation smoother. But if it fails, it can cause engine running issues, including rough idle, slow acceleration, misfires, or even knocking.

The main symptoms of a bad oil control valve include: