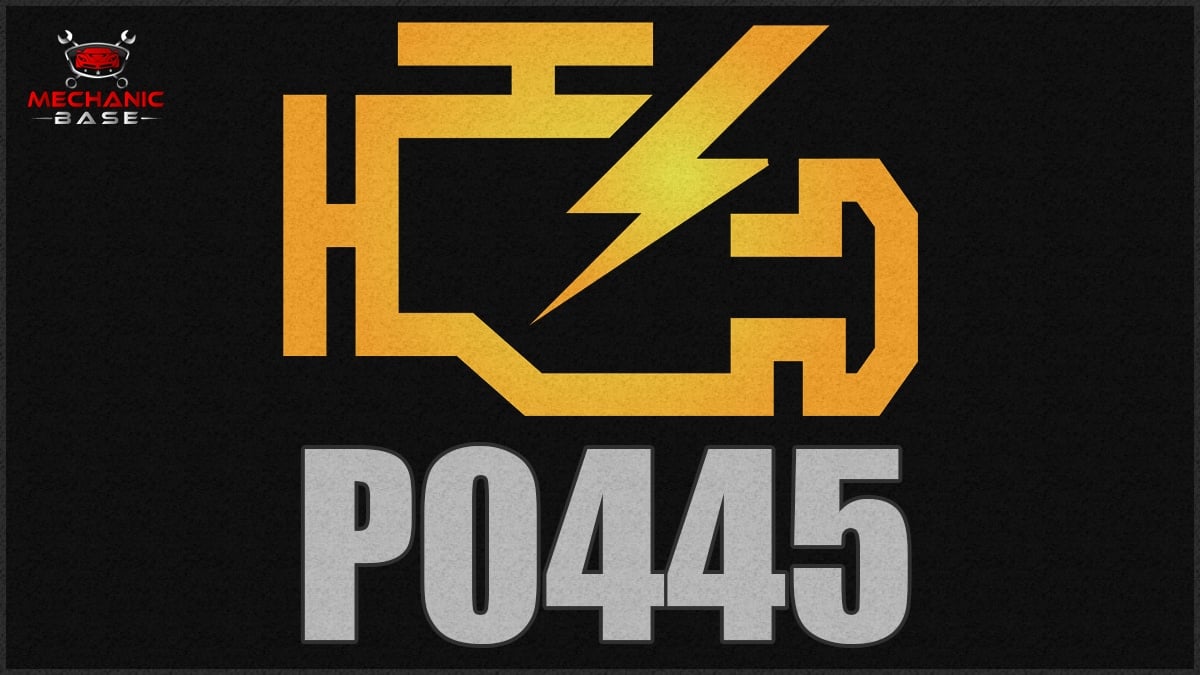 There are some things in life that are guaranteed – death, taxes, and problems with your car. Yep, even the best of us have to deal with car problems from time to time.

If you are having trouble with your vehicle and find yourself dealing with the P0445 code, then this blog post is for you!

In today’s post, we’ll discuss what the P0445 code means, some of the reasons behind it, as well as potential symptoms you may experience. In addition, we advise you on how to fix it yourself!

The P0445 code indicates that the engine control module recognized a short circuit to the purge control valve. The Purge Control Valve is also called the EVAP valve and it regulates the fuel vapors between the engine and the fuel tank.

The most common symptom of a P0445 code is just a check engine light on your dashboard. In some cases, you may also notice a slightly decreased fuel consumption or a fuel smell coming from the fuel tank.

The common symptoms of a P0445 code include:

The most common cause of a P0445 code is a failed purge control valve or the wiring to it. It could either be a broken wire or, more likely a shorted wire. In some cases, it can also be caused by a software problem in the engine control module.

Very Low – Driving with a P0445 code is usually not a problem. Your car engine will usually work fine with the P0445 code stored. However, this doesn’t mean that you can ignore the problem, as it can damage the engine in the long run.

You may notice that your fuel consumption is slightly worse and that there is a fuel smell coming from the engine. You may also have trouble filling the gas tank because the purge control valve will not release excess pressure.

How to diagnose the P0445 Code

Diagnosing a P0445 code can be done if you have basic knowledge of car electronics and have a multimeter at home. Here’s how a professional mechanic would diagnose the P0445 code.

Yes, driving your car with a P0445 code alone to a car repair shop is completely safe in most cases. The code is related to the vehicle’s EVAP system and its purge function. This effectively means the gas fumes from the fuel tank are not being transferred towards the engine intake when they should. However, it can have negative long-term effects on your engine.

The only symptoms you may experience are slightly increased fuel consumption and a strong gasoline odor that occasionally appears. But as this is harmful to the environment, you should fix this issue as soon as possible.

You can expect a total cost of $0 to $300 to fix the P0445 code. Fixing the P0445 cold is usually not that expensive, as in most cases only involves replacing the purge valve or repairing its wiring. For most cars, this component is reasonably priced and not too expensive. In some vehicles, however, accessing a faulty part can be difficult and may require various engine components to be removed.

In addition, tracking down wiring issues can be time-consuming. All of this may result in higher labor prices if you are paying someone else to repair it.

The best and easiest way of clearing the P0445 code is by using a diagnostic tool or an OBDII scanner. After seeing what might be the problem, you can always delete it and see if it reappears afterward. This actually goes for any engine-related error code. Sometimes, these pop up as a result of some sort of glitch and might not happen again after deleting it. But if they do, you definitely have a problem that needs to be taken care of.

No, the P0455 code will not disappear on its own in most car models, even after you’ve replaced the faulty part. On most cars, the check engine light will stay on for some time, and will only go off after several ignition cycles. But even after that happens, the error code may remain in memory which may cause confusion in the future if the check engine light pops up again. So, if you want to avoid this and know immediately if the repair was successful, use a scan tool to delete the error.

The car’s Evaporative Emission Control System, or EVAP, prevents the fuel fumes from venting into the atmosphere. It does this by sending them into the engine’s intake manifold, from where they get burned during the combustion process. But to prevent fuel vapors from causing any engine running issues, this has to be done in a controlled way, and that’s what the Purge valve does, which allows fuel fumes towards the engine when appropriate.

This is, in effect, an electrically-controlled solenoid that opens and closes when the ECU tells it so. If the purge valve malfunctions or there is an issue with the wiring that connects to it, the P0455 code will pop up. This will trigger a check engine light and might cause an increase in fuel consumption. While this is usually not dangerous for the engine, you should have it fixed as soon as possible.