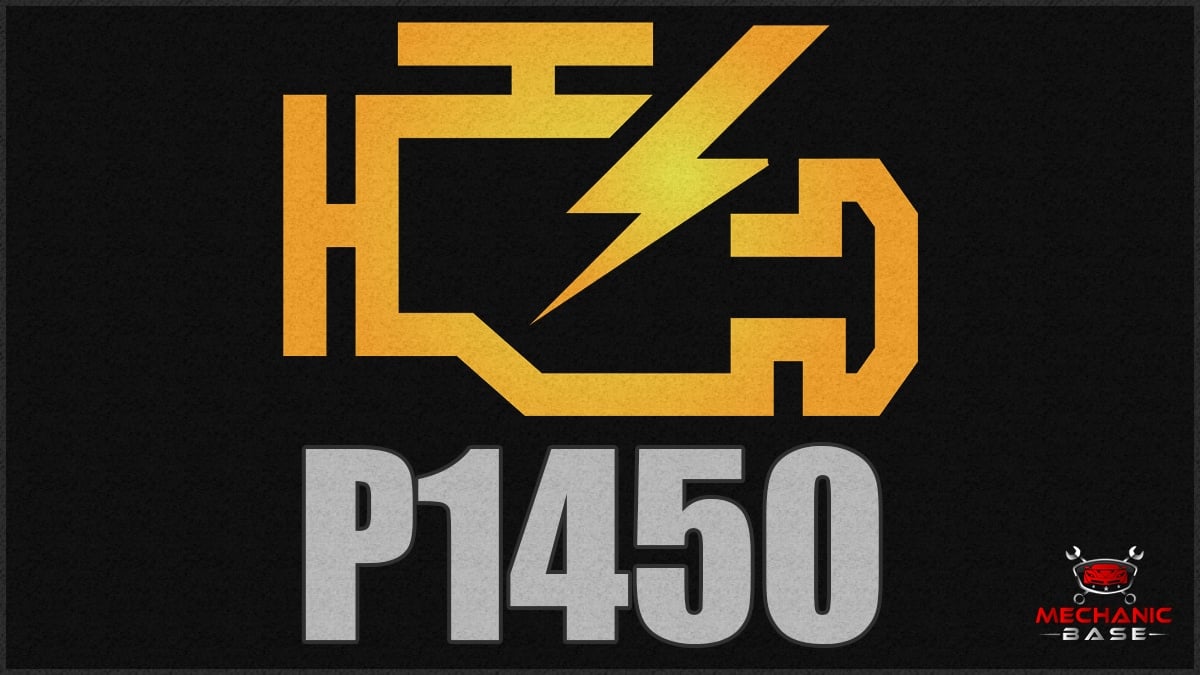 The Check Engine Light has just come on your vehicle and you run the OBDII scanner to see what’s wrong. What you get is the P1450 code, but what does it mean?

In this guide, we evaluate the P1450 trouble code meaning and its top symptoms. We also look at what causes this error code and show you how to fix it.

While the actual terms used to describe the P1450 code vary by manufacturer, the overall meaning remains the same. The P1450 code indicates that there’s too much vacuum in the EVAP system or fuel tank. This situation means the PCM cannot bleed the vacuum to maintain proper pressure.

If the high vacuum remains for longer than sixty seconds, the PCM detects a fault. Thereby the Check Engine Light comes on and the P1450 code gets set in the system.

There aren’t many symptoms associated with the P1450 trouble code. You probably won’t have any drivability issues that change how the vehicle feels. In most cases, you are only going to see the Check Engine Light come on.

Here are some things that could happen.

The most common cause of P1450 is a faulty or blocked EVAP purge control valve. It can also be caused by a blocked or clogged EVAP hose or canister. A faulty fuel filler tube could also cause this issue.

Low – The P1450 DTC isn’t considered a major issue because it doesn’t lead to drivability problems. It also won’t cause any further engine damage, even if the car continues to be driven. With no mechanical issues pressing on you, it’s completely safe to drive.

With that said, there are two problems with continuing to drive this car while the code is set. First, with the Check Engine Light on, you won’t know if there is a more severe issue occurring. If something else breaks during this time, you wouldn’t have any notice.

Additionally, the emissions of the vehicle could be altered because of the problem. More hydrocarbons could be released into the environment, leading to damage to the atmosphere. Your vehicle could also fail an emissions test, which would require a repair immediately.

There are some repairs that are more common than others. Many people find that one of these repairs fix the P1450 code:

It’s imperative that you perform a complete diagnosis to figure out what’s causing the P1450 before you attempt any repairs. Without this information, you could spend unnecessary money on repairs and parts that aren’t needed.

RELATED: What is an EVAP Leak? (& Is it Safe to Drive with?)

The most common mistake is failing to properly diagnose what’s causing the EVAP system fault. A complete inspection is needed of the fuel tank system, charcoal canister, and EVAP system to figure out what’s going on.

In many situations, it doesn’t even take a complicated repair to fix the problem. You may just need to clean out the system or clear out the connected hoses to get the code to disappear.

How to Diagnose the P1450 Trouble Code?

If you want to figure out what’s causing the P1450 DTC, you must walk through a complete diagnostic evaluation. Don’t just assume you know what the problem is or you could be spending unnecessary money on repairs.

Here are the steps that most professional mechanics take to diagnose the P1450 code.

If these steps don’t help you determine what’s wrong, you need to reach out to a professional mechanic for more support. With better diagnostic tools, they can pinpoint the problem easier.

You can expect it to cost between $10 and $300 to fix the P1450 code in most cases. If it’s just clogged hoses causing the code, you can get it fixed almost for free. However, if you need to replace the purge control valve or charcoal canister, it can cost over $300.

Here are a few of the common fixes and the associated repair costs.

Mechanics Tips about the P1450 Code

If you notice any other trouble codes at the same time, you may want to repair them first to see if the P1450 DTC goes away on its own. A few that you might run into include:

Yes, the P1450 code will usually clear itself after a while if you fix the problem causing it, but you can’t expect it to clear itself unless you repair it. On some car models, it may not clear itself so it is always better to clear the codes with a scanner.

The P1450 can potentially cause misfires, but it is not a very common correlation for misfires. However, if the purge control valve is leaking, it can cause a P1450 code and an improper air-fuel mixture that can cause misfires.