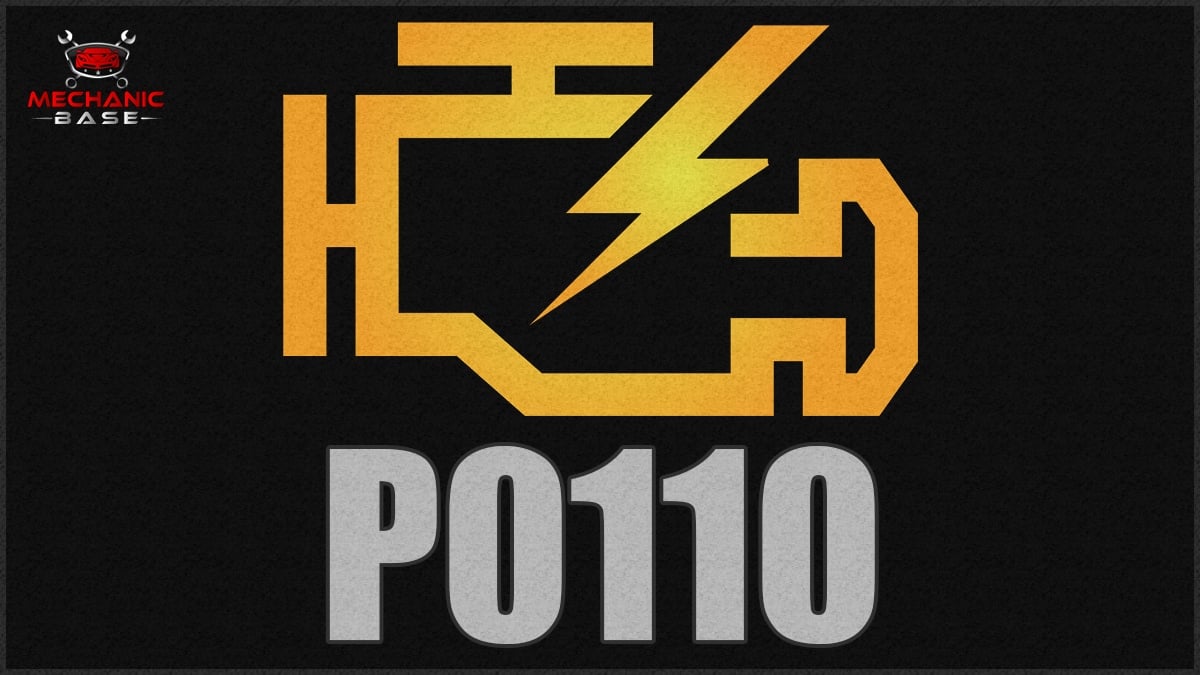 The P0110 code occurs in the engine control units trouble code memory when it finds a problem with the circuit’s intake air temperature sensor.

There could be a couple of reasons for this, and in this article, we will teach you everything you have to know about the P0110 trouble code.

Table Of Contents show
Code P0110 Definition
What does the P0110 code mean?
P0110 Trouble Code Symptoms
Causes of the P0110 Code
How serious is the P0110 Code?
What repairs can fix the P0110 code?
Common P0110 Diagnosis mistakes
Recommended Tools for Diagnosis
How to diagnose the P0110 Trouble Code
Estimated Cost of Repair
Frequently Asked Questions
How do I fix code P0110?
Is It Safe To Drive With Code P0110?
Where is the intake air temperature sensor located?
Is the IAT and MAF sensor the same?
Wrap Up: P0110

The P010 code indicates that the engine control unit recognizes a faulty circuit towards the intake air temperature sensor. It can be either a faulty sensor itself or a wiring problem on the way towards it.

The trouble code refers to an electrical circuit problem and not an air temperature problem. The air intake temperature sensor is often integrated into the MAF sensor.

The only symptom you may experience regarding the P0110 code is a check engine list in most cases. In some rare cases, you can experience performance problems like rough idle or poor engine performance.

You may notice any of the following symptoms with the code P0110:

Because the P0110 code tells us that there is a problem with the circuit to the sensor, there are actually not many things that can cause it.

Here are the most common causes of the P0110 code:

Low – When the P0110 code occurs, the engine will stop reading the air intake temperature, and it will use estimated values instead. The fuel correction of the air temperature is pretty low.

The P0110 code will not make your car stop after the road, and it will not cause any further engine damages – if we are not talking about the very long term. It is still recommended to repair the P0110 code as fast as possible.

A common mistake for the P0110 diagnosis is to replace the air temperature sensor without checking the connector plug and wirings.

Another mistake is to start looking for things that cause a high intake temperature without realizing that this is a fully electrical trouble code, which tells us that there is something wrong in the circuit.

How to diagnose the P0110 Trouble Code

There are some pretty easy ways you can diagnose the P0110 code. Here is how a professional would diagnose it. You may need some special tools to follow the guide.

Here are some common repair costs associated with the P0110 trouble code. The prices include labor and part costs but do not include diagnosis costs.

The P0110 error code is triggered when the ECM senses an issue within the intake air temperature sensor’s electrical circuit. In most cases, this will be caused by a faulty sensor, corroded connector, or broken wiring. Diagnosing the problem is a pretty straightforward job, which includes doing a visual examination of affected components and measuring voltages with a multimeter. After replacing or repairing the faulty component, you should delete the P0110 error code from the vehicle’s memory using an OBD2 scan tool.

In most cases, driving with the P0110 trouble code would not cause any additional problems. This code is set when there is no signal from the Intake Air Temperature sensor. As such, it usually only triggers a check engine light, with no other apparent symptoms. There are, however, situations when this can cause running issues, such as poor idle or sluggish acceleration. This happens if the air-fuel mixture gets messed up, as it’s adjusted according to values given by it IAT sensor.

Where is the intake air temperature sensor located?

Due to the nature of its job, the IAT sensor is always located somewhere on the engine’s intake side. Many car makers have it as a separate component, usually fitted between the air filter and the throttle body. Still, there are examples where the intake air temperature sensor is integrated into the MAF’s housing. As such, this whole assembly has to be replaced when the IAT sensor malfunctions.

Is the IAT and MAF sensor the same?

No, IAT and MAF are two separate sensors, with each having a function of its own. The MAF, or Mass Air Flow sensor measures how much air goes toward the engine. And the Intake Air Temperature sensor, or IAT, tells the ECM if that air is cold or warm. But in some cars, however, both these sensors may be integrated into the same housing. If that’s the case, both the IAT and MAF sensor will have to be replaced when one of them is faulty.

To adjust the air-fuel mixture correctly and optimally, the ECM has to know how much air is going into the engine. That value is, in most cars, obtained from the Mass Flow Air sensor, or MAF. But because the air is gas, it expands or contracts depending on the temperature.

This is why modern engines have an Intake Air Temperature sensor or IAT. This can be a separate component or, in some cases, a part of the MAF sensor assembly. If it or its wiring goes bad, the ECM will trigger a check engine light and set the P0110 trouble code.