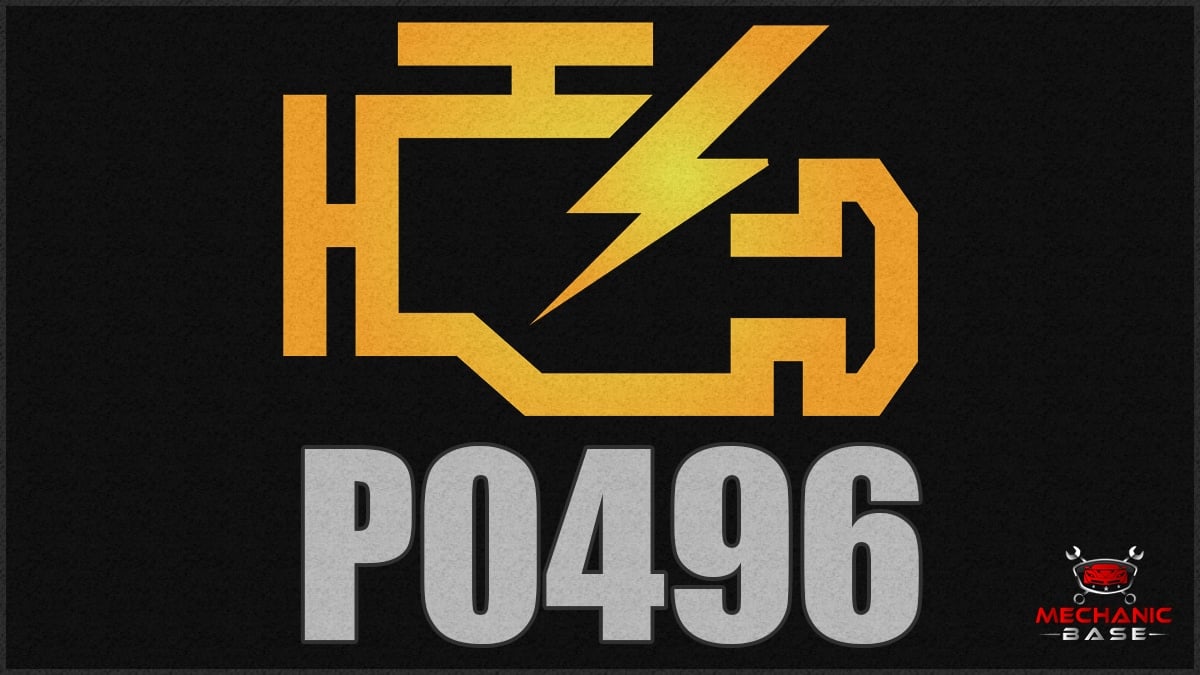 When the Check Engine Light comes on without any other symptoms, you might be wondering what is going on. One such DTC that will cause this is the P0496 code. What is it and how can you fix it?

In this guide, we explain the meaning of the P0496 trouble code. We also show you what commonly causes it, what symptoms you might notice with it and we outline the steps to repair it.

The P0496 code indicates that there’s an incorrect amount of intake vacuum flow occurring in the car’s EVAP system. Any time this vacuum is higher than what the computer determines is appropriate, the codes will be set.

While this code can occur with all brands, it appears to be most common with GM vehicles. In some cases, Honda, Acura, Hyundai, Kia and Mazda vehicles might have a slightly different meaning than the one we are describing.

In many cases, the Check Engine Light is the only symptom that occurs with the P0496 trouble code. Other than that, you may not notice any other significant performance issues or signs that anything is wrong.

If there are symptoms of the problem, you might notice:

It’s obvious that the P0496 code has everything to do with the EVAP system, but that doesn’t mean that’s where the problem is coming from, although it’s most likely.

Low – You shouldn’t have any trouble driving your car with the P0496 present. However, you still don’t want to drive longer than necessary.

For starters, while the Check Engine Light is on, you won’t know if other problems occur that need your attention. Beyond that, allowing the engine to run rich can cause damage to the catalytic converter. Replacing a catalytic converter is expensive, so it’s important to repair the EVAP system as quickly as possible.

It’s critical that you repair the P0496 code as quickly as possible, but you don’t want to just throw parts at the problem, assuming you know what’s wrong. Instead, you want to walk through the steps to get a correct diagnosis.

Here are a few of the most common fixes, but you might find that your vehicle requires something else.

The most common mistake that mechanics make when working with the P0496 code is to replace EVAP system parts without doing proper diagnostics. In some cases, the fix is as simple as securing the fuel cap, which is often overlooked.

By starting with the fuel cap, you ensure that the easiest fix is dealt with before replacing expensive parts. If that’s not the problem, you only spend a minute checking it and you aren’t out a lot of money.

How to Diagnose the P0496 Trouble Code

Even if you aren’t a professional mechanic, you can follow the same steps that most technicians would take. With a few simple tools and some minor expertise, you can hunt down the cause of the P0496 trouble code.

Here’s how a professional would handle it.

It’s always possible that these steps won’t get you to the proper fix. If so, you might need to have it looked at professionally.

After you’ve done a complete diagnostic of the system, you should know what needs to be repaired. Here are some approximate costs for labor and parts for the top repairs.

Mechanics Tips about the P0496 Code

With the P0496 trouble code, it’s possible to pick up other faults with your scanner. If you have cleared the system and multiple codes return, it’s best to deal with the other ones first.

By repairing any other trouble codes, you may figure out the fault that’s causing P0496 to set. One repair could fix several problems at once, thereby saving you time.