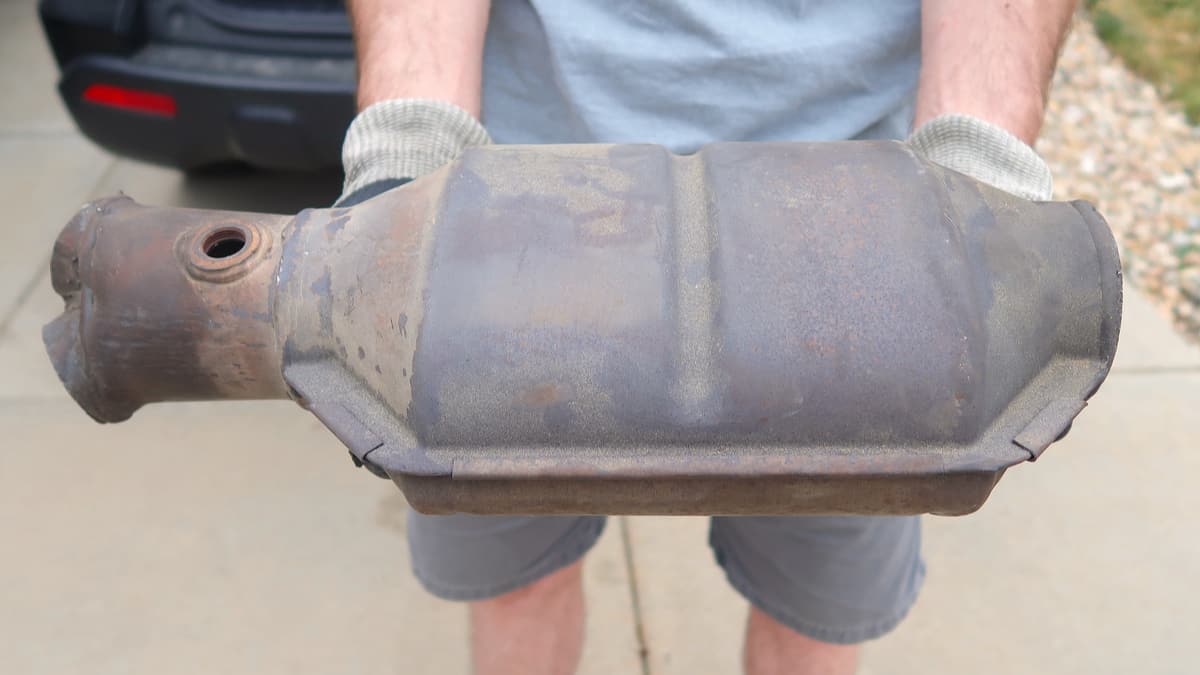 The catalytic converter in your vehicle is responsible for getting rid of emission gases in a responsible way. When it isn’t working as intended, the vehicle could fail an emissions test.

How Much Does a Catalytic Converter Replacement Cost?

The average catalytic converter replacement cost is between $400 and $2,500, for the parts and labor. However, it’s not the labor that costs so much. Rather, the catalytic converter will make up most of the cost, mainly because of the expensive materials used in the interior construction of the part.

As with any auto part, no two are created the same. You can find a generic catalytic converter that will get the job done, but it might not provide the best fit or superior materials.

As with any auto repair, the labor expense factors into what you will spend. If you can do the job yourself, you might save some money. However, replacing a catalytic converter isn’t normally a job to be done in a home garage.

It’s possible that the old catalytic converter needs to be cut off and the new one could be welded in place. If you have a dual exhaust, you must perform the task twice.

Additionally, labor rates are different within every region. If you live in a city, you might spend more than your countryside neighbors. You will also pay more to visit a dealership or specialized exhaust shop over using your local auto repair garage. Evaluate the pricing around you, but don’t choose a shop based on the cheapest rates. If the job takes them twice the time to complete the task, you could actually end up spending more.

When you take your vehicle to the auto repair shop, you have more expenses than just getting the catalytic converter replaced. You will also need to pay for any relevant diagnostic charges.

Aside from that, if there are other issues with the exhaust system, those repairs could also be added in. It’s possible for multiple systems or parts to fail at the same time, especially if another fault has caused the catalytic converter to go bad.

Here is a brief of the most common symptoms you may notice. However, check our other article down below if you want a more detailed guide: 8 Symptoms of a Bad Catalytic Converter

Thirty-four states now require emissions testing. Sometimes the first sign that drivers recognize something is wrong is when the car fails its emissions test.

Another one of the earliest signs is when the Check Engine Light comes on. As the catalytic converter starts to fail, the oxygen sensors send a signal to the ECU, letting it know that there’s a problem.

If you smell rotten eggs in your car, it could be that you just left some trash in the cabin. However, it’s more likely that there’s a problem with the catalytic converter.

The rotten egg smell occurs because of hydrogen sulfide. When the catalytic converter is working as it should, this compound gets turned into sulfur dioxide, which doesn’t have any smell. However, when the compound comes out of the tailpipe without being properly converted, it leads to a terrible stench.

As carbon builds up in the catalytic converter’s honeycomb design, it becomes impossible for it to continue converting gases as it should. This blockage creates poor performance because the engine needs a good amount of airflow to be optimized.

The blockage leads to the wrong amount of backpressure, which can dramatically influence the overall airflow. The less airflow there is, the more the power is reduced. You will notice the lack of power the most when you attempt to accelerate.

When the catalytic converters backs up, it causes more than just poor performance. As the engine becomes starved of air, it can’t run efficiently.

The harder the engine needs to work, the more fuel it will go through. You will see reduced fuel economy, which only further hurts your pocket every time you need to fill the tank.

What is the Catalytic Converter?

The catalytic converter is part of your car’s exhaust system. It looks similar to a muffler, but it is constructed with different materials. Inside the catalytic converter, there’s a unique honeycomb-like structure that contains catalyst particles that interact with the exhaust gases. These particles can include rhodium, palladium and platinum.

Can the Catalytic Converter Be Removed?

You might think that the most obvious solution is to simply take off the catalytic converter. Some people choose to do this and install a straight pipe, but is that the best solution? Yes, it makes for a cheaper repair, but there are reasons that it’s a terrible idea.

First of all, your car is going to fail emissions testing; there’s no way around it. Additionally, the car is going to dramatically suffer, with performance and efficiency. On top of that, you are allowing more pollution to enter the environment, making you part of the problem.