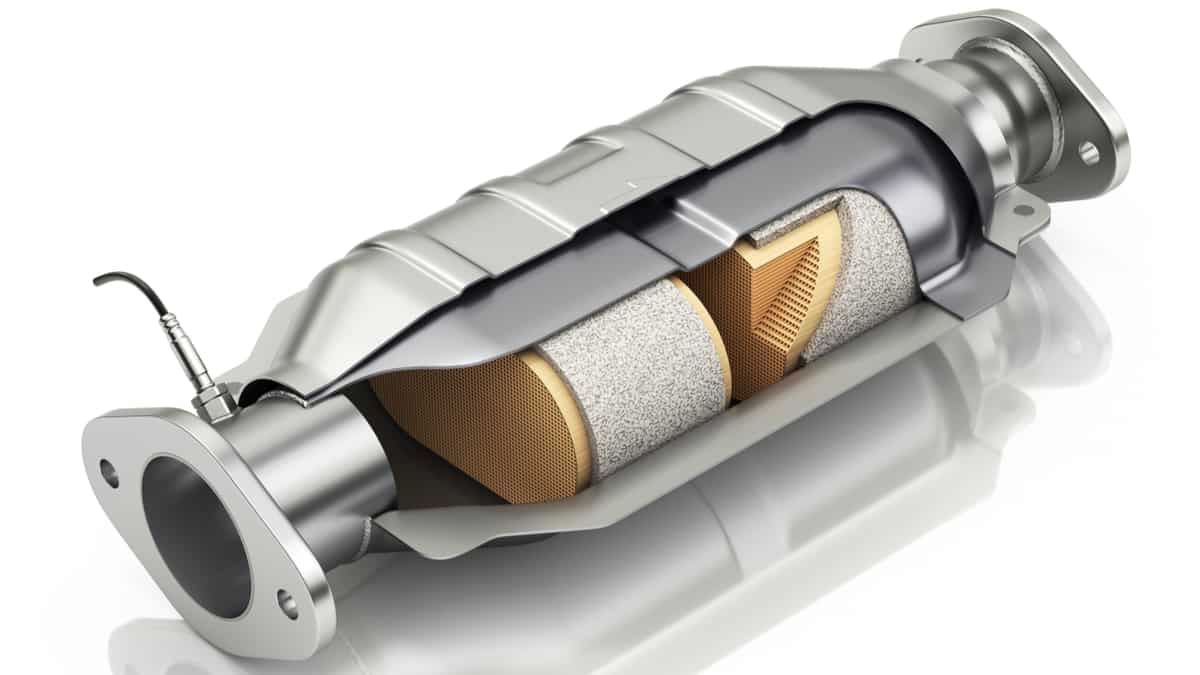 It’s always important to be aware of the signs of a problem with your car so that you can get it fixed before it becomes a bigger issue.

Catalytic converters are known to fail and are often very expensive to replace, especially if you are looking for a brand new one.

The most common symptom of a bad catalytic converter is a sulfur smell when the engine is warm together with a check engine light on your dashboard. You may also notice engine performance issues like acceleration lag, higher or lower fuel consumption, and a misfiring engine.

While these are far from all possible symptoms, it’s the most common ones. In this post, we’ll look at the most common bad catalytic converter symptoms, location, and function and go through what makes them so attractive to thieves.

The most common trouble code when it comes to a bad catalytic converter is the P0420 code.

If you observe delays when accelerating or a decrease in power when driving in steep areas, while all other parts like spark plugs, filters, sensors, etc. are fine, then it could be the catalytic converter that’s bad.

Mechanics often misdiagnose a faulty catalytic converter with other components like a bad oxygen sensor or any other sensor.

To check if your catalytic converter is clogged, keep your hand close to the exhaust pipe end and ask someone to push the accelerator pedal to increase your car’s RPM to 2000. If you get a meager amount of exhausts coming out, you might have a clogged catalytic converter. Compare the flow to a similar car if possible.

Better or worse gas mileage is one of the symptoms of a poor catalytic converter. While a better gas mileage may sound like a good deal, it can damage your engine and may cause even more expensive repairs.

Due to improper combustion of the fuel when the exhaust is clogged, it will make your car engine to be much less efficient and it needs to work harder for the same amount of power. Therefore, a bad catalytic converter will most often cause a higher fuel consumption, even if lower is possible in some cases.

When the catalytic converter is clogged, it will restrict the airflow of exhaust fumes so that the engine’s air-fuel mixture will get rich (too much fuel, leading to unburnt fuel)

The combustion of this excessive air-fuel mixture causes an odor smell like rotten eggs or burnt sulfur, which is an obvious indication of your catalytic converter’s malfunction.

It could also happen if your engine is not running as it should and unburnt fuel will enter the catalyst. This mixture then ignites in the converter due to the heat and melts its inner material, causing even more blockages.

If the catalytic converter is clogged, the engine will get too much fuel that the engine cannot burn. It will also create back pressure which will cause the engine to struggle to get rid of the exhaust fumes.

If your car starts for 2-3 seconds and then dies, it could definitely be caused by a clogged converter. This is because it may take 2-3 seconds for the pressure to rise in the exhaust system until the engine is choked and shuts off.

You will often notice this by seeing dark exhaust smoke coming from your exhaust pipe during acceleration or at idle. If you have a yearly car inspection in the state or country you live in, your car will most likely fail an emission test or smog test.

When the catalytic converter is clogged, it restricts the flow of oxygen in engines, and engines require a lot of oxygen for proper fuel combustion. This reduced airflow leads to overheating due to an excessive amount of unburned gases and may also lead to a misfiring engine.

If your engine is misfiring, you should get it fixed as soon as possible, because it can lead to further expensive repairs if you just ignore it.

9. Rattles or other noises

You can ask a friend to press the accelerator pedal while you try to listen under the car if the rattling noises are coming from the catalytic converter or somewhere else.

What is a catalytic converter?

The honeycomb shape aims to ensure that the pollutant gases flow through the more exposed surface and converts Nitrogen oxide, carbon monoxide, and hydrocarbons into safer elements like carbon dioxide . Despite being one of the most expensive products, Platinum is normally used as a catalyst in catalytic converters. However, in some cases, rhodium and palladium are also used.

What could damage a catalytic converter?

Catalytic converters are often getting worn with time and it most likely has to get replaced one or more times during your car’s lifetime. Some car models even have a service schedule of when it should be replaced (Even if most people don’t follow this because of the expensive replacement cost).

If your car engine is combusting motor oil, caused by worn piston rings or clogged crankcase ventilation, it could cause damages to the catalytic converter really fast. Other causes could be contaminants like unburned fuel caused by misfires. Coolant entering the combustion chamber by a blown head gasket could also cause damage to the honeycomb.

Catalytic converters contain precious metals like small amounts of platinum, rhodium, and palladium. These metals are very attractive to thieves since scrap yards will pay well for a used catalytic converter.

Catalytic converters are also relatively easy to steal because you just have to cut off the pipe with a tiger saw or something similar and it’s done in under 3 minutes. If you want to learn more about how to protect your catalytic converter from getting stolen you can check out our other article: How To Protect Your Car Against Catalytic Converter Theft

Depending on the car engine, the distance where it’s installed from the engine could differ a lot. On some engines, the catalytic converter is installed directly on the exhaust manifold, while on others it could be installed almost in the middle of the exhaust pipe.

Can a bad catalytic converter ruin your engine?

Yes, it can but it is more likely that your engine will just shut off and not run until you fix the damaged catalytic converter. A clogged or damaged catalytic can create high backpressure into the engine which can damage other parts of your car’s engine or emission system, which could lead to a severe engine failure.

What is the average life of a catalytic converter?

How do you fix a catalytic converter without replacing it?