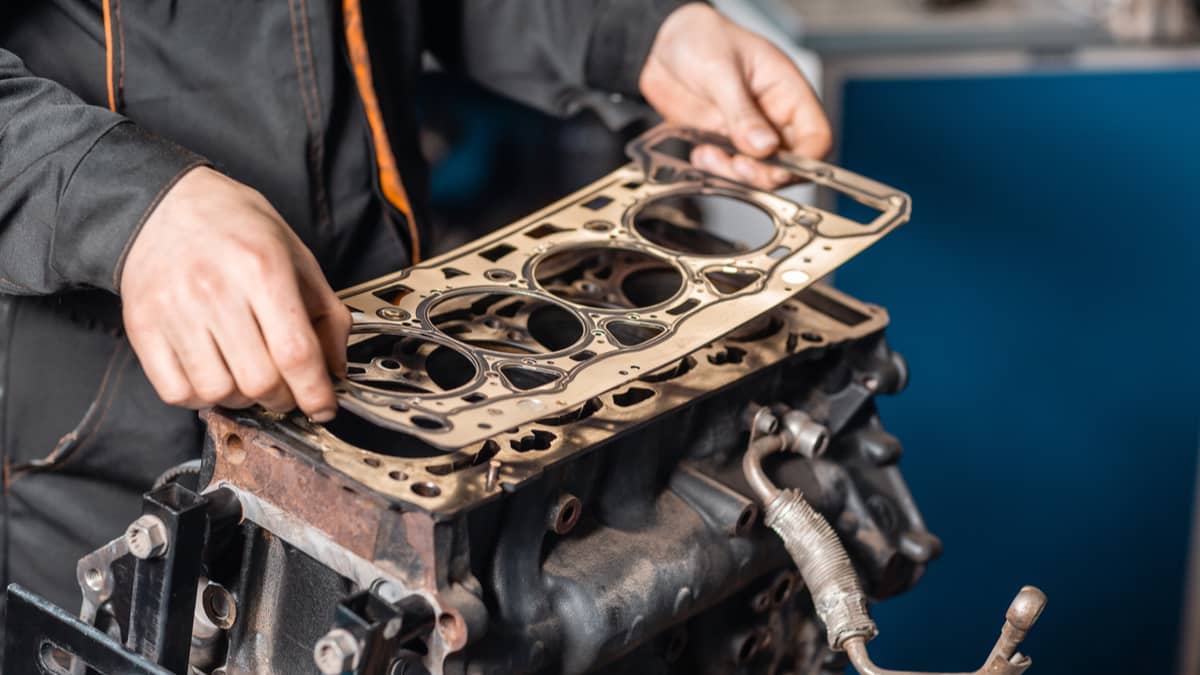 A blown head gasket is never a good thing. In fact, it’s one of the car malfunctions that most people dread.

However, most people know when the head gasket has failed because the symptoms get your attention.

We will get a closer look at what happens when the head gasket goes bad, why you need the head gasket, and where it is located. Let’s begin with the common signs to look for.

The main symptoms of a bad or blown head gasket include:

Here is a more detailed list of the signs of a bad or blown head gasket to look for:

While the defective head gasket might have originally been caused by the engine overheating, it can also cause further temperature issues. If you’ve recently run the coolant too low, had a clogged radiator, or found a cooling system leak and ran the engine too hot, you might have damaged the head gasket.

Now, oil might be infiltrating the cooling system or the coolant is leaking into the cylinders where it is burned off. Either way, you are dealing with an engine that won’t stop overheating.

You should never drive a car when the engine overheats, as it can lead to cylinder head warping and damage to the catalytic converter. Both of these problems are only going to add further expense to your car repair bills.

Head gasket failure often leads to a milky, sludge-like substance on the oil filler cap or dipstick. It resembles a milkshake and occurs because coolant leaked into the oil or vice versa.

While this could mean other issues besides a blown head gasket, it’s a pretty good sign that your engine needs to be ripped apart.

You don’t ever want to drive with oil contamination occurring because it will ruin the engine bearings. Repair often requires a complete oil flush, replacing the oil filter, and removing the engine’s bottom to check on the bearings.

When the head gasket fails, it can allow compressed air and fuel to escape over to another cylinder. This problem reduces the compression in the cylinder, leading to a rough-running motor. As you are heading down the road, you might notice a significant loss of power as a result.

Another thing that can happen is that the coolant is leaking into the combustion chamber, which will cause the car to misfire and have rough idle and acceleration.

If this happens, you will most likely also notice a check engine light on your dashboard, telling you which cylinder the misfire occurred when you read the trouble code.

While we are discussing leaks, the head gasket failure can lead to similar external issues. The gasket fails and allows oil or water to leak not only into the engine or cooling system but also outside too.

This doesn’t just cause further issues, but it’s messy as well. Additionally, if the coolant levels fall too low because of the leak, it can cause the engine to overheat, leading to permanent damage.

If there is an oil leak from the bad head gasket, you could end up with a blue smoke issue. The oil can land on the exhaust, causing smoke that is white or blue.

However, an antifreeze leak creates a pure white smoke with a sweet smell. The antifreeze is making its way past the head gasket and infiltrates the cylinders. As part of the combustion that’s occurring, the coolant turns into white smoke coming from the exhaust pipe.

Both of these leaks allow pressure to enter the cooling system or oil breather system. If you are struggling to keep the dipstick secure or one or more of the radiator hoses continue to blow, this could be the cause.

Additionally, you must be aware of the fire hazard involved with leaking oil. As it lands on the hot exhaust, it could create acrid smoke, plus the risk of fire.

The Function of a Head Gasket

The head gasket is responsible for sealing the engine’s combustion process in the chamber. It allows the coolant and oil to flow properly through the system without mixing.

This seal allows the combustion process to occur uninterrupted to produce the power needed for propulsion, while harmful gases are directed out through the exhaust as directed.

Modern head gaskets are constructed from layers of steel material combined with elastomer. This design is durable and lasts longer. Older head gaskets were made from asbestos and graphite. Because of the better construction, newer gaskets are less prone to failure than the older models.

The most difficult aspect of replacing a head gasket is finding it. This vital component is located deep in the framework of the engine.

You might be able to find more detailed instructions in a service manual. Either way, if you decide to replace the head gasket yourself, you want to carefully remove each part and put them in a secure location.

Head gasket repairs are among the least favorites of many car owners, mainly because of the price. That’s why many cars with a bad head gasket get sent to the junkyard, especially when the resale value is already low.

Typically, the head gasket replacement is expensive, but not because of the parts. Instead, the high cost comes from how much work is required to replace the head gasket.

The entire engine head has to be removed to access the head gasket, which is a time-consuming job. Because your mechanic needs to give up other jobs during those hours, you will be charged for every minute they spend working on the head gasket.

If you are a trained mechanic, you can reduce costs if you do the repairs yourself. However, you will need a lot of time to get the job done and some special equipment.

Otherwise, you can reduce the costs by getting the head gasket repaired early. At the first sign of trouble, get your car to the shop. If you don’t, you could create more engine damage that will only rack up the cost and cause lengthier repairs.