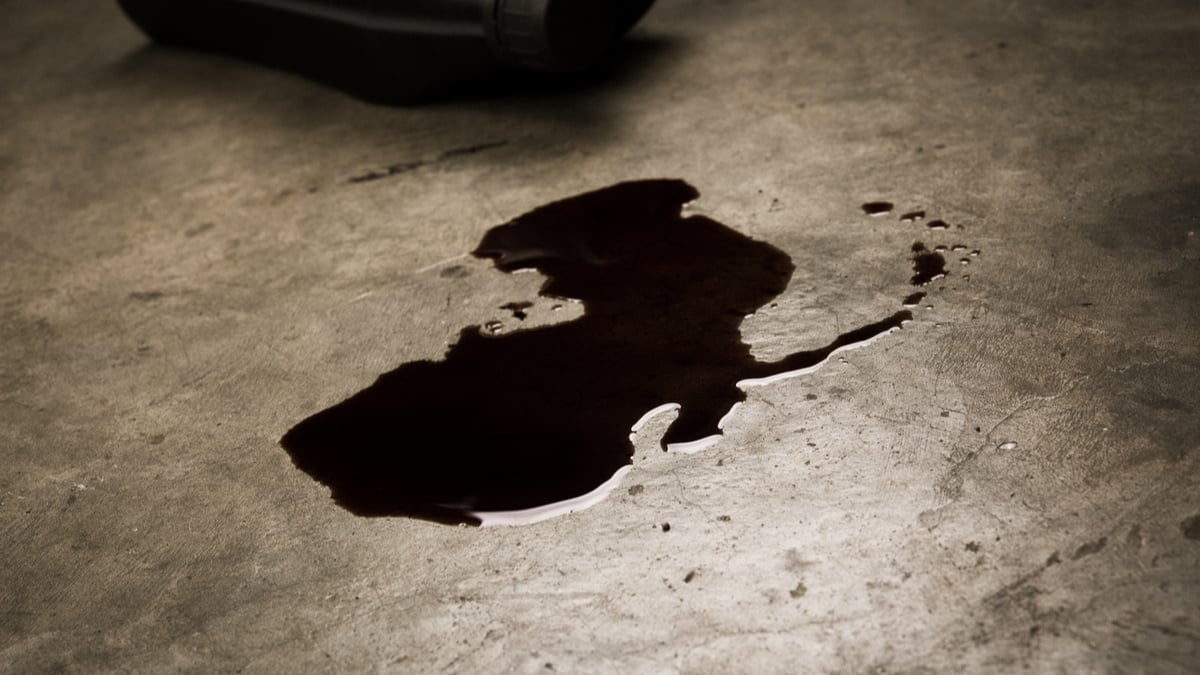 There are few more common car problems than a leaking oil pan gasket. But while they’re relatively common, they’re often misdiagnosed, and you end up replacing far more components than you should.

That’s why we took the time to help walk you through the four most common symptoms of a bad oil pan gasket before walking you through everything else you need to know to troubleshoot and diagnose this pesky component. Let’s take a look at the signs:

The main symptoms of a bad oil pan gasket include:

Here is a more detailed list of the signs of a bad or leaking oil pan gasket to look for:

The most common symptom of a faulty oil pan gasket is a visible leak. While small leaks will leave residue around the oil pan, you’ll notice oil drips as the problem worsens.

You’ll typically first see this underneath where you park your vehicle for the night. If you let this oil residue build-up, it will stain the affected area, and it’s not something you can easily remove after the fact.

Your oil pan holds your engine oil, and the oil pan gasket keeps the oil in the oil pan. So, if your vehicle has a leak, then the oil is escaping when it shouldn’t, and your overall oil level is going to drop.

So, if you pull the dipstick and find that you don’t have enough oil in your engine, you need to find out where it’s going. It’s pretty common to find that it’s escaping from a leaky oil pan gasket.

While there’s no sensor to tell you that your oil pan gasket is leaking, there is a sensor to let you know that you don’t have enough oil. If enough of your oil has leaked out and you’re running on dangerously low oil, you might have a check engine light or engine oil level light.

If you have a check engine light for low oil, it’s only a matter of time until your engine overheats, and you cause serious engine damage.

This is not a very common symptom, but it can happen. One of the engine oil functions is to cool your engine, so it’s not surprising that your engine might overheat if the oil is leaking out.

If you have an overheating engine due to a leaking oil pan, then you have a serious problem that you need to address right away. While many sites will tell you to look for excess engine smoke, this is rarely a symptom of a leaking oil pan gasket.

That’s because, in order to link excess smoke to an oil pan gasket leak, the oil has to leak out of the gasket and find its way to the top of an exhaust line, then it has to burn off there. Even then, the excess smoke won’t be coming out of the exhaust.

Instead, it will be coming straight off where it is burning from. If you have blueish smoke, it’s more likely that oil has found its way into the combustion chamber, which is indicative of an internal problem, not a leaking oil pan gasket.

Your vehicle’s oil pan gasket is located directly on top of the oil pan. You can find the oil pan on the lowest point of your engine, and it’s usually a metal, rectangular pan attached to the bottom of your engine with some bolts.

The gasket is at the top of the pan, so if you’re replacing the oil pan gasket, you’ll need to remove the oil pan and scrape off the old gasket before adding a new one.

Your vehicle uses the oil pan gasket to keep all of the oil inside the oil pan. Without the gasket, you would have a metal-on-metal connection from the top of the oil pan to the bottom of the engine. Not only would this lead to a lot of wear and tear, but it also won’t form any sort of seal.

That means whenever oil passes through the area, it will find nooks and crannies to escape from. The oil pan gasket sits between those two components and forms a tight seal around the area. That way, none of the oil can escape.

It might sound like a simple job, and it is, but without you’d continuously be adding new oil to your engine, and you’d be risking engine damage. So, your oil pan gasket is simple, but it’s essential.

The average oil pan gasket replacement cost is between $100 and $350, depending on what kind of vehicle you drive and where you take it for repairs. The oil pan gasket costs $20 to $80 and the rest is labor costs.

The good news is that for most vehicles, the oil pan gasket is fairly easy to reach, and it’s not that difficult to replace. In fact, you can typically find an aftermarket oil pan gasket for your vehicle for between $20 and $80. However, you will want to replace the oil and oil filter as well, so you’ll need to add another $50 to $100 for those parts too.

Also, keep in mind that aftermarket parts are generally a little cheaper than OEM. But just because they’re less expensive doesn’t mean they’re not as good!

Still, this can save you up to $400 compared to taking it to a repair shop! Just take a look at your vehicle and determine if you’ll be able to drop your oil pan straight down before ordering any parts. Also, keep in mind that the oil pickup tube is inside the oil pan, so you’ll need plenty of space to drop it down to clear the pickup tube! Sometimes the front beam is in the way, which means that you need to lift the engine.

Some engines have a sealant instead of a gasket and in this case, you need to choose the right sealant for your engine.