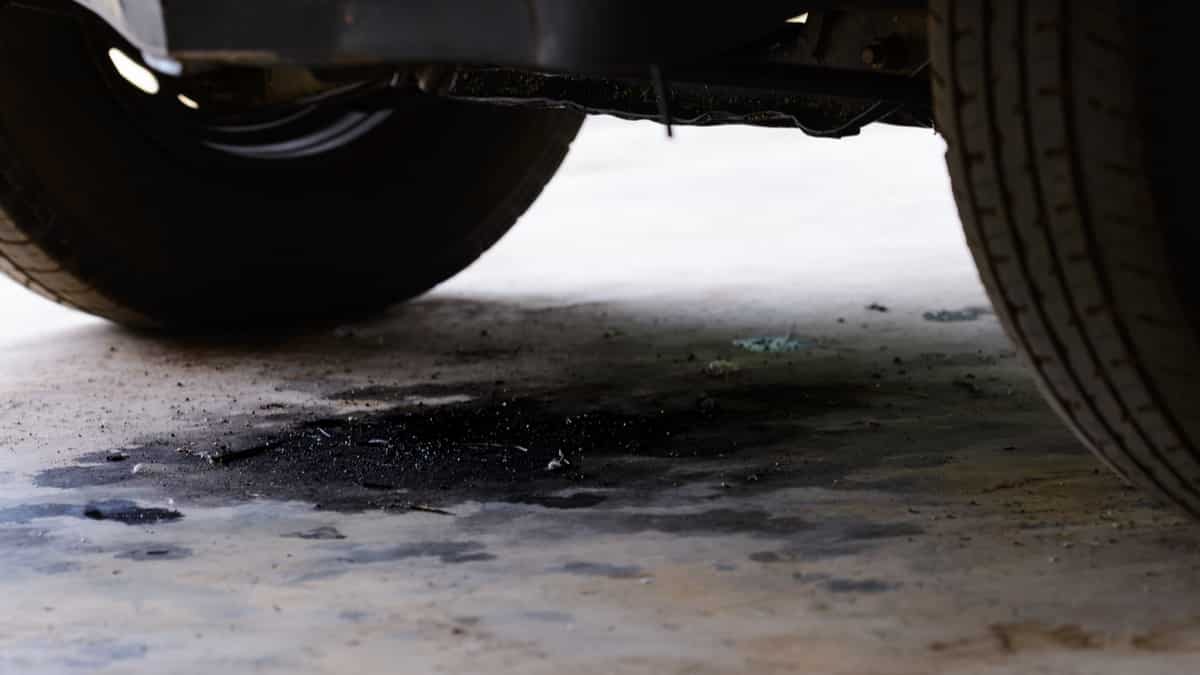 Did you notice oil on your garage floor while the car was parked during the night? Engine oil leaks are pretty common in cars, and some car models leak more than others.

However, engine oil leaks can harm the environment, and it can cause your car to catch fire if the oil is leaking close to a hot exhaust pipe.

10 Reasons Why Your Car is Leaking Oil

The most common reason a car is leaking motor oil is due to a leaking oil drain plug or a leaking oil filter. It can also be caused by a bad valve cover gasket, damaged oil pan, or clogged crankcase ventilation.

These are just the most common reasons, and far from all of them. There could be many different causes and locations of the engine oil leak, so it needs to be visually inspected before replacing any parts.

Here is a more detailed list of the most common possible reasons for an oil leak.

A faulty or damaged oil filter is sometimes the culprit that causes the oil leak. Check the oil filter to see if it is tightened properly and there are no signs of rust on it. If you find rust on it, it is definitely time to replace both your engine oil and the filter.

The leak can often also come from the O-ring sealing. However, these can be difficult to replace separately, and you may need to replace the whole oil filter.

Please note that the oil filter should be changed every time the oil is changed.

The oil drain plug is located at the bottom of the oil sump and is accessible from the vehicle’s underside. A worn or damaged drain plug can cause the oil to leak.

The oil plug sealing or the whole oil drain plug should be replaced every oil change. However, most people skip this and install the old drain plug again. This can cause the oil plug O-ring to leak.

Check and make sure the oil plug is tightened properly, and if it looks like it is leaking from the plug, you might have to replace the gasket or the whole plug.

Valve covers are located on the top of the engine cylinder head and serve as a seal to prevent oil leakage. The valve cover gaskets tend to wear out after some time because of the heat and the effect that rubbers are getting hardened over time so that oil may drip from them.

The valve cover gaskets are often visible from the outside of the engine, and it is pretty easy to see if the leak comes from there. However, sometimes it can come from the engine’s backside, and you can use a mirror to try to locate any oil leaks from there.

If you have an aluminum oil pan, there is a risk that you hit something under the car, which caused cracks in the oil pan where the oil leaks from.

If you have a steel oil pan, it is possible that it started to rust for a long time, and after a while, you got a super small rust hole in the pan, which cause the leak.

The crankcase ventilation makes sure that the car’s compression will not cause an overpressure inside the crankcase.

The crankcase is often ventilated through a valve and a hose going to the intake again.

If the crankcase ventilation is clogged, it can cause overpressure in the engine, and this can be the main reason for several different oil leaks in your car because the oil is trying to find a way out of the engine.

This can easily be identifiable by loosening the oil cap while the engine is at idle. If everything works fine, it should be a slight underpressure there. However, if there is high overpressure there, it might be caused by clogged crankcase ventilation.

If the head gasket is damaged, it can cause oil leaks into the combustion chamber or the coolant system.

However, if there is a leak from the oil pressure channels near the edge of the head gasket, it can also cause external oil leaks on your engine.

This is not very common, but it absolutely happens. If it looks like the oil is coming from between the engine block and the cylinder head, it is definitely time to take a look at the head gasket.

The camshaft does often only have sealings on the front of the engine.

Also, the air-cooled ones in the front can leak, so if you see any oil leaks in front of the engine, it is probably coming from the engine oil cooler.

The oil pressure sensor is often located in the cylinder head or at the engine block. This sensor is often made of plastic, which can cause it to crack and leak within time.

It is often pretty easy to replace once you locate it, and it is often very affordable.

This is not common, but it could happen, so it should not be forgotten. If the engine cylinder head or the engine block is cracked, oil can leak from the engine and even enter the cooling system.

This can especially happen if you, by some time, didn’t have enough coolant in the cooling system, which caused the coolant to freeze.

How to Prevent Oil Leakages?

Regular maintenance and routine oil service are sufficient to keep your car’s engine in good condition and prevent any oil leakage.

It is vital to clean the crankcase ventilation hoses and the control valves sometimes to keep a slight underpressure in your car’s engine. Overpressure will tear on the sealings and create oil leaks.

You can also use special additives that are effective and help to prevent oil leaks. If you want to look at one of these additives, you can find it here at Amazon.

If you notice other symptoms and the problem does not occur in the above-mentioned areas, we advise you to take the car to an authorized dealer for inspection.