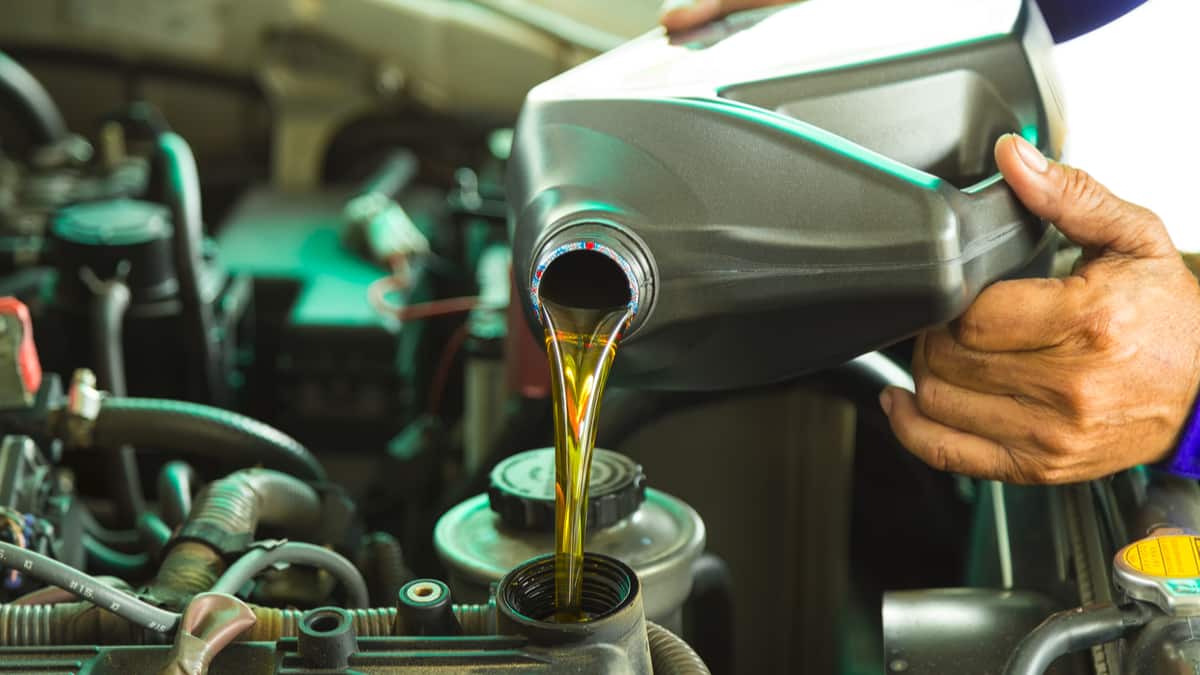 Almost every car owner knows that you can destroy the engine by driving with too little engine oil, but what about too much oil?

Sometimes when topping up engine oil it can be difficult to know how much to add to get a perfect level at the max mark on the dipstick, so overfilling is an easy mistake to be done. But what to do if you put too much oil in the engine by mistake, and what can happen to the car engine if you ignore it?

In this article, we’ll look at what happens if you put too much oil in the engine and what you should do about it. We will also look at some of the most common questions regarding overfilling a car engine with oil.

What Happens If You Put Too Much Oil in Your Car?

If you add too much oil to your car engine, the crankshaft can hit the oil and foam the oil, resulting in engine damage. Fortunately, no action is needed if the oil level is only slightly above. However, if you overfill it 0.2″ or more above the MAX mark, you may need to drain some of the oil.

The engine oil reserve holds some extra oil to compensate for the fluid expansion due to hot conditions. Adding an extra half a quart will not damage your engine. However, anything more than that could be harmful to the engine.

When you add too much oil, the excess oil will go towards the crankshaft, and as the crankshaft rotates at a high-speed, the oil is mixed with the air and ‘aerates’ or becomes foamy. This foamy texture of the oil acts like a bad lubricant, and the oil is not pumped effectively. Over time, the engine will be starved of proper lubrication, and due to the weak oil pump, it can get locked up.

RELATED: How to Check Your Car’s Engine Oil

The Effects Of Too Much Car Oil

Overfilling your car’s engine oil can cause some of the following consequences:

RELATED: Will a Slight Overfill Harm an Automatic Transmission?

What Are The Symptoms of Overfilled Engine Oil?

The most common sign that you have put too much oil in your engine and that the oil level is too high is that your engine starts to leak oil onto the ground, or you see blue smoke from the exhaust. It can also cause a warning light on your dashboard.

Sometimes you don’t know if you or the mechanic has overfilled your engine oil. However, if you notice any of these symptoms, there may be a risk that your oil is overfilled:

How Much Is Too Much Oil In A Car?

If you want to be on the safe side, anything above the MAX mark on the dipstick is too much. However, if you overfilled the oil by half a quart or less, there is usually nothing to worry about. If the oil level is 0.2″ or more above the max mark on the dipstick or you see foam on it, it’s time to drain some oil though.

How much oil you can add before it reaches critical levels for the engine depends on the engine type. Typically, older engines are less sensitive to higher oil levels, so if you have a modern engine, you’ll want to be careful of overfilling it.

How To Fix Overfilled Oil?

The advantage of using a suction pump to get the oil out is that you don’t have to raise the car and crawl under it. But you need a special pump and an air supply for it, and most people don’t want to spend money on a tool they will only use once or twice.

The most common method is to drain it the traditional way through the oil plug. If you are not used to cars this can be a bit messy and sometimes difficult so you may want to have a mechanic do it if you are unsure. Here is how you can drain the oil through the oil plug:

RELATED: Should You Check the Engine Oil Hot Or Cold?

If you noticed that your engine oil level is above the max mark, but you are absolutely sure that neither you nor your mechanic overfilled the oil, there is actually another explanation for this problem.

If you only drive short distances and never allow the engine oil to warm up properly, it will eventually fill it with gasoline that will not evaporate unless it reaches a higher temperature. This will cause the oil level to rise over time and can actually be harmful to the engine as well.

However, if you notice that the oil level is too high, caused by gasoline in the oil, the best way is still to get an oil change done and try to drive the car for longer trips in the future to prevent this problem.

RELATED: What Color Should Your Car Oil Be? (Dipstick Engine Oil Color Chart)

Can You Drive a Car With Too Much Oil?

No, you shouldn’t drive a car with too much oil. Too much oil can cause it to foam which causes air bubbles to enter the oil pressure channels inside the engine; this is bad for the engine and can cause it to seize if you are unlucky. But if you only overfilled it slightly 0.2″ or less below the max mark, you don’t need to worry too much in most cases.

How Long Can I Run My Car With Too Much Oil?

Will an Extra Quart of Oil Damage My Engine?

Will 1 Liter of Extra Oil Hurt My Engine?

Yes, even just an extra liter of oil can damage your engine, depending on the engine type. Due to the risk of engine damage with too much oil, it is better not to take the risk and drain the oil instead. If you overfill it by half a liter it is quite safe in most engines, but 1 liter is usually too much.

What Happens If The Oil Level is Above Max?

Can Too Much Oil Cause Engine Noise?

Yes, too much oil can cause the crankshaft to hit the oil level and foam up the engine oil. Foamed engine oil can cause air bubbles to pass through the oil pump into the hydraulic lifters and other necessary parts of an engine. This can cause the lifters to malfunction and cause a ticking noise from the lifter.

How Much Engine Oil Should I Fill In My Car?

READ MORE: How Much Oil Does My Car Need?

No, too much engine oil will not cause a blown head gasket in most cases. However, overfilled engine oil can cause oil leaks which cause smoke to come from the engine bay or the exhaust, which is quite similar to the symptoms of a bad head gasket.

Will Excess Oil Burn Off?

If you put too much oil in your engine, it can result in foamed engine oil which can lead to serious engine damage. You need to drain it in most car models if it’s 0.2″ above the MAX sign on the dipstick, but it’s better to be safe than sorry.

Overfilling your engine oil may seem like a small mistake, but in reality it can have serious consequences for your engine. Therefore, while some engines can handle the overfilled engine oil well, it’s really not worth the risk.

Driving with too much oil can cause a complete engine failure which can lead to an engine replacement, which is definitely not cheap. If you’ve overfilled the oil, it’s cheap insurance to drain some oil, even if it’s not a fun job. You can either drain the oil with a suction pump or drain it through the oil plug.

I hope this article helped answer the questions you had about overfilling engine oil, and that you now have the knowledge of what to do if you overfill the oil in the future.