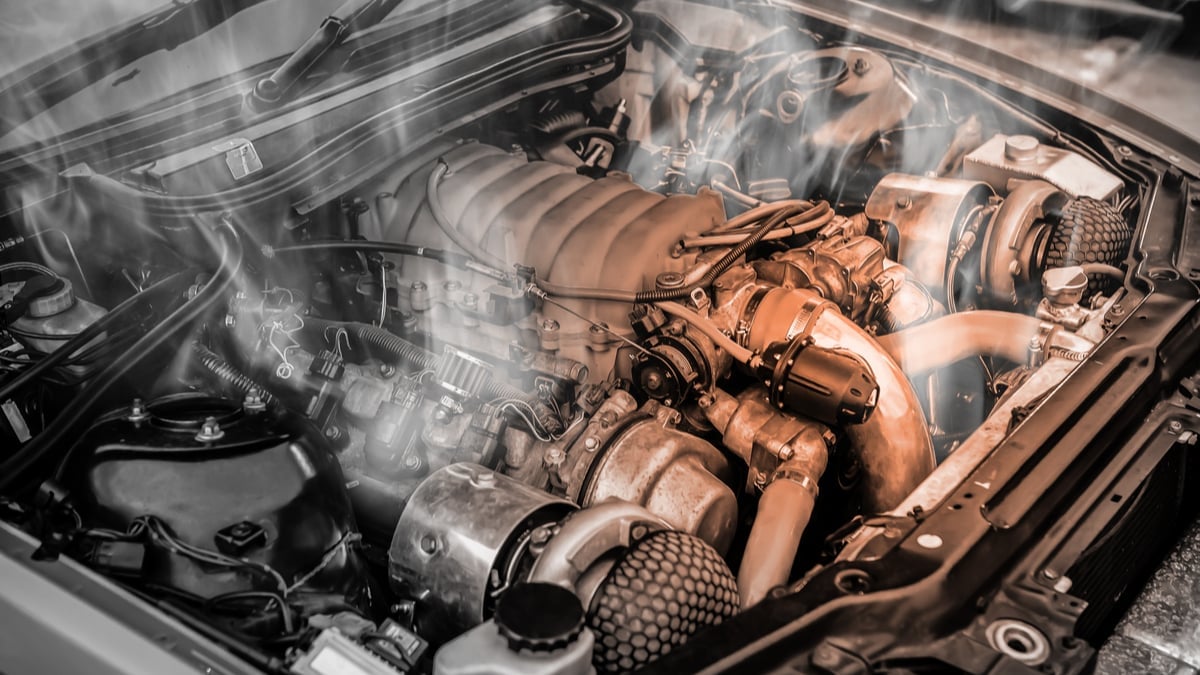 Have you ever been driving your car and seen white smoke coming from under the hood? This condition is scary and alarming, especially if you don’t know what is causing it. White smoke from the engine is not something that should occur under normal circumstances.

We look at the causes of white smoke from the engine and discuss possible solutions. We can also estimate what a repair might end up costing you.

What Causes White Smoke from Engine?

When your combustion engine is working the way it was intended, it produces a mixture of carbon dioxide and water vapor. This is channeled out through the exhaust system and mostly unnoticed. However, when there is a problem with the way the engine is running, it might start burning something else.

White smoke indicates some form of contamination. Instead of burning air and fuel, the engine is burning something else.

Here’s a more detailed list of why there is white smoke coming from your engine:

If the white smoke is coming from the engine bay, you do most likely have an external coolant leak or an overheating engine. When coolant comes in contact with the hot part, it will cause vapor to create white smoke.

Coolant leaks can be caused by a lot of different things like cracked coolant hoses or bad gaskets. If you can see a coolant leak, you can check out this article about coolant leaks to learn more.

When the head gasket blows, coolant leaks into the engine compartment or into the exhaust pipe. If it is serious, the leak might be visible on the outside of the exhaust manifold. However, these problems often go unnoticed.

Still, it will create white smoke coming from the engine. It can also cause an overheating engine, which leads to extensive engine damage. This is one of the more costly repairs to perform but is necessary if you want to save your motor.

Additionally, if a cylinder head cracks, coolant can leak into the cylinder or combustion chamber. As it mixes with the fuel, it will create the same white smoke seen with a blown head gasket.

As coolant is seeping into the engine, it can’t do its job, leaving your engine at risk for overheating. You can look in the oil or coolant reservoirs to see if there is any sign of the two mixing.

The injector ensures that there is the right amount of fuel to mix with oxygen for combustion. Most modern motors are highly calibrated to ensure nothing affects this mixture.

However, if the injector isn’t working right, the mixture might receive too much fuel. Because this fuel won’t be able to burn correctly, you will notice white or grey smoke coming from the exhaust.

You can also have trouble with your diesel engine if the mixture isn’t just right. If the injector pump timing is wrong, it will act just like a faulty fuel injector from a gas engine.

The bad timing produces a mixture that contains too much fuel. As it goes unburned, you end up with white smoke pouring from the engine.

The engine is made of numerous seals and valves that must all do their job for everything to work right. If one of the piston valve seals or rings starts to go bad, oil can start leaking.

However, the burnt oil tends to have more of a blue color to it but is easily mistaken for white smoke. It will appear whiter when the leak is minimal, eventually turning bluer.

3 Types of White Smoke from Engine

Your car typically produces some vapor as part of the exhaust. If you aren’t used to seeing it or you start your vehicle on a cold day, you might be more alarmed.

When temperatures drop, the exhaust steam can look more intense, sometimes being mistaken as smoke. However, if this smoke disappears quickly, you probably have nothing to worry about.

When the white smoke is thick and comes with a sweet smell, you can bet on a coolant leak. Coolant is very sweet, which is the same reason you are told to keep antifreeze away from animals, because they will be attracted to it and drink it.

However, when coolant mixes with fuel, it burns in the engine, creating white smoke from the engine. It’s also going to produce a distinct sweet smell that is unlike any other automotive fluid. As we discussed above, a blown head gasket or cracked cylinder could cause this situation, both of which are costly repairs.

If you notice white smoke coming from the engine, but you don’t smell anything unique, it could be caused by condensation in the exhaust. Just like regular water vapor, condensation can build up in the exhaust, especially if you are just starting the vehicle in the morning.

Picture dew forming on the grass. This is the same situation but in your car exhaust. If this is the situation, it will burn up quickly. If the smoke persists, there is something wrong with your engine that should be looked at.

The cost to repair the white smoke situation varies depending on what is causing it. As we’ve illustrated, there are several conditions that could occur. If it is something simple like a bad gasket, a replacement should cost you less than $150, with labor included.

All of the other repairs tend to be pricey. For example, a leaking valve or seal could cost anywhere from $50 to $1,000. A broken fuel injector or pump could run as high as $2,000. What’s most serious is a blown head gasket or the cracked cylinder, which isn’t just costly, but also difficult to repair. Depending on what kind of car you drive, you could spend up to $2,500 to repair these problems.

However, whenever you see white smoke coming from the engine, you want to have the problem fixed. Otherwise, you are going to allow extensive damage to the engine that will require a complete replacement.