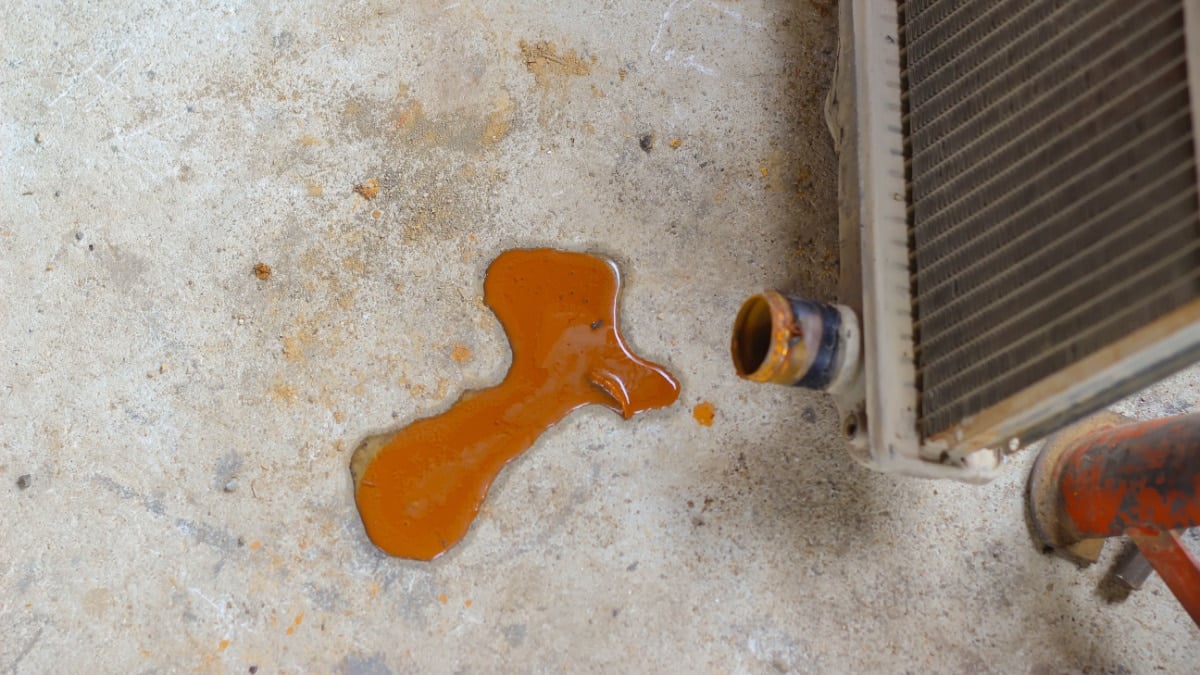 There’s never a good time to see rust, but it’s even more alarming when it is found in vital automotive components, such as the cooling system. If you see rust in coolant during regular maintenance or when topping off the fluids, you will need to take immediate action.

In this guide, we discuss what’s so bad about having rust in the coolant and we look at the top four causes. We also show you what to do about it and how to prevent it. At the end of our article, you gain the answers you’ve been looking for, keeping you more informed.

Table Of Contents show
Is It Bad To Have Rust In The Coolant?
What Causes Rust in the Coolant?
1. Lack Of Antifreeze Mix
2. Bad Antifreeze Product
3. Not Maintained Properly
4. Air Getting Into The Cooling System
How to Remove Rust From the Coolant?
1. Fix Coolant Leaks And Drain Fluid
2. Flush The Cooling System
3. Fill System With A Good Antifreeze Product
How to Prevent Rust in Coolant From Forming?
Frequently Asked Questions
Where Does Rust In Coolant Come From?
Can Rusty Coolant Cause An Overheating Engine?
Why Is There Brown Stuff In My Coolant?
Does A Radiator Flush Remove The Rust?
How Much Does A Coolant Flush Cost?
Conclusion: Rust In Coolant

Is It Bad To Have Rust In The Coolant?

There should never be rust in the coolant of your car. If you see rust, you know that there’s something wrong that requires your attention. Rust indicates that corrosion is occurring within the cooling system.

These rust particles start to accumulate until the passages become blocked. When coolant can’t pass through the engine as intended, permanent damage can occur. For this reason, you want to deal with corrosion at its first indication.

With that said, people can see a brown substance in the coolant and assume it’s rust when it’s something else. It’s important to discern if you are simply looking at old, contaminated coolant or if there are actual rust particles. Either way, the solution would be the same.

What would be most concerning is if the brown color was actually oil that infiltrated the cooling system. This problem would require a much larger repair.

What Causes Rust in the Coolant?

Rust can be caused by something simple such as not enough antifreeze or something more mechanical, such as air in the system. Either way, it’s important to deal with the problem immediately to ensure the cooling system remains operational.

Here are the four more common causes leading to rust showing up in the engine coolant. Most of these issues are completely preventable.

Your car’s cooling system is designed with metal materials. The coolant ensures that water doesn’t infiltrate these parts and cause rusting. It acts as a barrier.

However, if you aren’t using the right amount of coolant in the system, condensation and moisture can occur. Once it begins, the metal is susceptible to rust and corrosion. Additionally, without the right amount of antifreeze, the engine can start overheating, leading to even bigger problems.

RELATED: Can You Use Water Instead of Coolant? (Why You Shouldn’t)

There are varying types of antifreeze products on the market. For the same reason, you only choose one type of oil for your engine, it’s important to put the proper coolant in the car. You can figure out the appropriate type and ratio by examining the owner’s manual.

With most formulas, you need to mix the coolant 50/50 with water. There are also pre-mixed formulations available to buy, but it doesn’t normally make sense to purchase water when you can mix it yourself.

When the coolant gets low, some people will pour straight water into the reservoir. This practice can also lead to rusting. Water without coolant included leads to oxidation and corrosion. Rust can build on the water pumps, pipes, impellers and anything else that’s metal.

As with all fluids in the car, there’s an appropriate time to change it out. You may be used to getting regular oil changes, but the coolant is just as important. If you allow old coolant to circulate through the system, it won’t be able to protect the vital components any longer.

Not only can the metal parts start to corrode, but old coolant can lead to the failure of seals and hoses. Any problem that leads to a lack of circulation could cause the engine to overheat, which is bad news.

Most manufacturers recommend having the coolant changed every 30,000 miles or two years, whichever comes first. However, there are some newer cars that are going longer than this, so it’s important to check the maintenance schedule set for your vehicle.

4. Air Getting Into The Cooling System

The cooling system is meant to remain sealed. When it is working as it should, there will be no air trapped within the components.

However, various malfunctions can allow air into the system. Trapped air allows more water to build up in the system, which, you already know, leads to rust.

How to Remove Rust From the Coolant?

Once you’ve confirmed the presence of rust, it’s time to take action. Even if you don’t have a lot of mechanical experience, it’s not difficult to follow these three steps. However, if these seem to be too much for your level of knowledge or the tools you have, reach out to a mechanic instead.

First, you want to diagnose and find any coolant leaks. After you ensure no coolant leaks, you need to drain the old coolant from the vehicle. With a drain pan, open the cap and allow the coolant to flow out.

Once the coolant has stopped flowing, you can transfer it to an old antifreeze jug. Take it to your local auto parts store for recycling. Don’t put old bottles of antifreeze in the trash or pour them out.

Draining the cooling system isn’t enough to get rid of the existing rust. You will also need to flush out the system with water.

Double-check how much water is needed and make sure you use an appropriate amount of pressure. The water should force out any leftover debris or rust.

READ MORE: How to Flush a Car Radiator (and Radiator Flush Cost)

With the system completely flushed out, you are ready to refill it. However, you must be careful what products you choose.

Make sure you get the appropriate coolant for your engine type. You may also consider using a rust inhibitor product to help prevent future problems.

With the system refilled, it’s important to remove any air by bleeding the system. Otherwise, you could allow air into the system, which puts you back in the same boat. Additionally, you need to double-check how much coolant is in the reservoir and top it off as needed.

How to Prevent Rust in Coolant From Forming?

Since you know how rust is formed in the coolant, you will likely figure out some practical ways to keep it from occurring. Either way, we have some steps that will keep the cooling system running at optimal levels.

Here are a few of our best tips.

If you notice any defects with the coolant or something doesn’t seem right, you should get help from a qualified mechanic. A little bit of prevention can keep you from dealing with bigger repair bills in the future.

Where Does Rust In Coolant Come From?

Rust occurs when there’s not enough antifreeze in the system to protect the metal parts. It also occurs when water infiltrates the system beyond what should be used with the coolant. In more extreme cases, it can be caused by poor maintenance or air getting trapped in the system.

Can Rusty Coolant Cause An Overheating Engine?

A small amount of rust shouldn’t cause the engine to overheat, especially if it is dealt with immediately. However, as the rust builds up, it can start to block passageways that keep the coolant from flowing. Without the right amount of coolant, the engine will start to overheat, leading to permanent damage.

Why Is There Brown Stuff In My Coolant?

Degraded coolant can start to look brown, especially if it hasn’t been changed regularly. What’s worse is if there’s rust in the coolant, leading to the brown color. Rust can be a sign of internal damage that must be dealt with immediately to ensure the cooling system’s integrity. There’s also the chance that oil has infiltrated the cooling system, which leads to its own set of problems.

Does A Radiator Flush Remove The Rust?

When you flush the radiator, you remove any rust pieces that are floating around. It will push out any loose pieces so they don’t get lodged in the system. However, there could already be wear that is irreversible, which is why you still want to keep a close eye on the efficiency of the cooling system.

How Much Does A Coolant Flush Cost?

If you prefer your own coolant flush, you will only need to pay for the cost of supplies. You may already have a drain pan, so buying the coolant is all that’s needed. If you prefer to pay for a professional cooling system flush, expect to pay between $100 to $200, based on what type of car you drive and where you live.

Coolant rust can be caused by a lack of antifreeze or the wrong combination being used. It also occurs when you don’t maintain the cooling system properly or if there is air in the system. Either way, you need to resolve the problem quickly before catastrophic failure occurs.

By keeping a close eye on your vehicle, you know there’s a problem before it turns into something major. With proper maintenance and regular inspections, you can prevent rust in the coolant. Even if you miss the chance to prevent it, most cases are easy to fix if caught early enough. Whether you need to add coolant, flush the system, maintain it better or get out trapped air, you are equipped to handle these small tasks.

Considering what can happen if rust builds up in the system, you owe it to your car to take swift action at the first sign of a problem. Make coolant changes a regular part of your car maintenance schedule. As with all things, a little prevention goes a long way to keeping repair bills and major failure at bay.