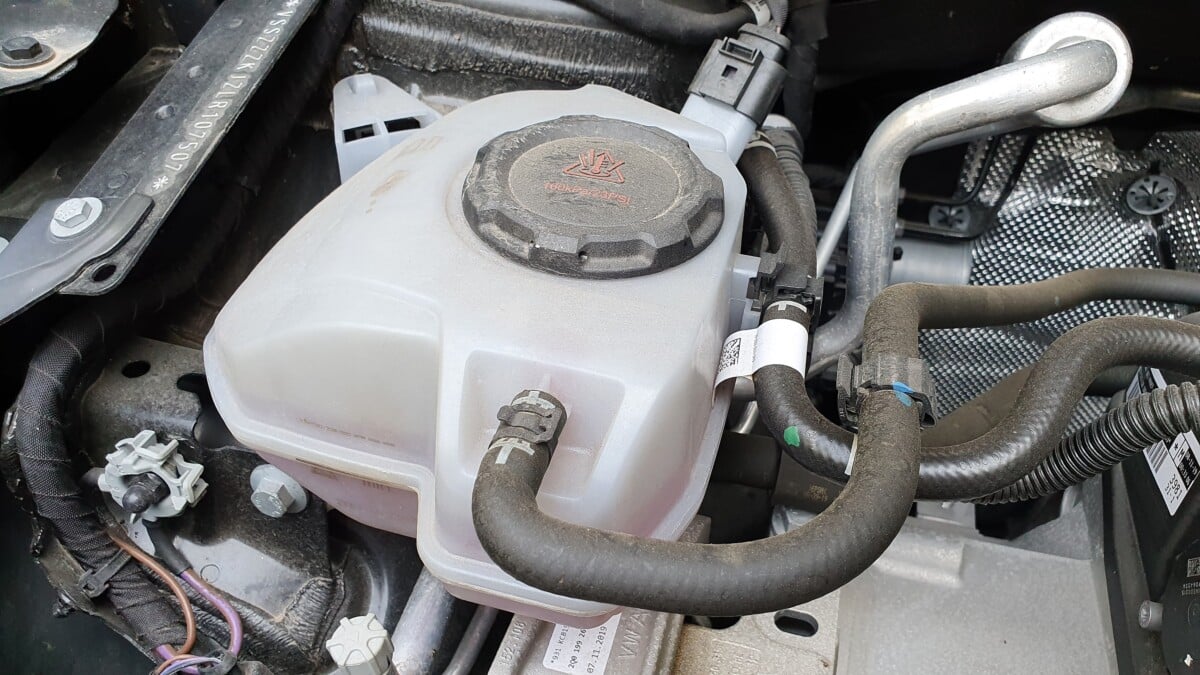 Were you about to fill your car with coolant when you realized that there is a lot of oil in the coolant reservoir?

You’ve probably heard before that oil together with coolant is a very bad sign, but is it actually true?

In this article, we will go through everything you have to know about mixed oil and coolant together – the common causes of it and how you can diagnose and prevent it. So let’s take a quick look at what could cause the oil in the coolant reservoir.

6 Causes of Engine Oil In The Coolant Reservoir

The most common cause of oil in the coolant reservoir is due to a blown head gasket or a cracked oil/coolant heat exchanger. It can also be caused by a faulty transmission cooler. In rare cases, it happens because of cracks in the engine.

Before replacing any parts, you should be sure that no one filled motor oil in the coolant reservoir by mistake. With the age of a car, it can also slip through a little bit of oil into the coolant through the years. So if you haven’t changed the coolant in a few years, it can just be a sign that you need to change the coolant.

If you need to take a closer look, here is a more detailed list of why you may have oil in the coolant reservoir:

Unfortunately, the most common problem causing oil in your coolant reservoir is a bad or leaking head gasket. Why I say, unfortunately; is because it is often a quite big job to replace it and often very costly.

There’s a rubber seal snuck right between the head and the engine block in your engine called the head gasket. Its sole purpose is to provide an airtight seal as the head is fitted onto the block, meaning they are two different parts.

The gasket ensures that the combustion’s air pressure doesn’t light-up, and the oil that’s in the engine doesn’t leak out. If an engine overheats and stays heated up for prolonged periods without cooling, the head gasket blows up, causing the oil to leak into the coolant system. This is why some oil may be getting into the coolant reservoir.

Because of the expense of replacing the head gasket, I do recommend checking out the other parts first and make a proper diagnosis before replacement.

On a lot of modern cars, there is an oil cooler installed on your car, which is cooled by the coolant. Sometimes a gasket or a crack could occur inside the oil heat exchanger and it will cause the oil and coolant to mix up.

This part is often much easier to replace and cheaper than a head gasket. It’s also a very common problem, so I recommend checking the oil heat exchanger if you have one fitted to your vehicle.

This often causes the coolant to pour into the oil pan instead of oil in the coolant system.

3. Cracks in the cylinder head

Overheating damage the cylinders over time, cracking them at certain places, allowing air and oil to leak out. The cylinder head can also be warped after an overheated engine, which will cause the head gasket to leak.

Fix cracks in the cylinder head is often very difficult and, in a few cases, even impossible. It often requires welding, which can be difficult in some places.

It is often easier and cheaper to replace the cylinder head with another used one. Although this occurrence is comparatively uncommon, it can let the oil in the coolant reservoir as you drive.

However, you should always check the other things before and really make sure that the cylinder head is causing it.

4. Cracks in the engine block

If you find cracks in your car’s engine block itself, unfortunately, you will probably need a new engine block as it is often very difficult to weld it.

This is when the engine usually lacks the proper oiling and cooling, and due to the extreme and prolonged heat build-up, the engine block eventually cracks at points, allowing the residue oil in the coolant reservoir and other places.

Fixing this would be the most expensive option as one would need to replace the whole engine, as rebuilding the old one may be too expensive.

Proper diagnosing should be made before replacing the engine block of course.

Are you really sure that it is actually engine oil that is in the cooling system? Actually, the transmission also has a heat exchanger that is cooling the transmission fluid with the coolant.

This is not very common, though, and most cars do not even have this cooler. Most automatic transmissions have a transmission fluid cooled by the airflow in the front of the car.

6. Someone filled oil there by mistake

Did you recently buy the car or let some doubtful mechanic do any work with your vehicle before? Then maybe someone filled something else than coolant in the cooling system before.

It may sound really ridiculous, but I can tell you that it happens more often than you may think.

If you made any diagnosis and really cant find any leak in the oil or cooling system; then this solution is maybe just this easy.

How To Fix Oil in the Coolant Reservoir?

The first thing you should do if you notice oil in the coolant reservoir is to pressure test the system. If you pressure-tested the system and everything seems fine, you might want to remove the coolant from the reservoir and keep driving the car to monitor if any new oil appears in the reservoir.

Determining if there is a leak in the oil or cooling system is often quite easy. The tricky part is where the leak is coming from.

There is an easy way to test out if there is a leak in the oil or coolant system.

They are quite expensive, so you might want to let a workshop do this for you, or borrow one. You can find one here at Amazon if you want one. This is an affiliate link, this means that at no cost to you, we may receive a small commission for qualifying purchases.

Can I Seal it with a Coolant Leak Repair Additive?

As you may know by now, when the oil and coolant are mixing, it can cause a lot of further engine problems that may destroy your whole engine.

Because of this, I do strongly recommend always repair the problem properly instead of trying any additive.

Repairing the problems causing the oil in the coolant reservoir can often be super-expensive, though, so if you have an ancient car that is just going to drive for a little bit more – it can be worth a chance. It’s up to you if you want to risk the whole engine!

Remember that these sealers can cause other important parts in the cooling system to clog also!

Why is the mixing of these liquids harmful for the engine?

Coolant and engine oil are two completely different liquids and serve different purpose which is why the two should never be mixed together.

The reason behind it relies on both the liquids’ chemical properties. Oil is a thick viscous substance, while coolant is water-like. The engine relies completely on oil for lubrication, which coolants and water cannot offer. That should make it clear that oil and coolant cannot go together.