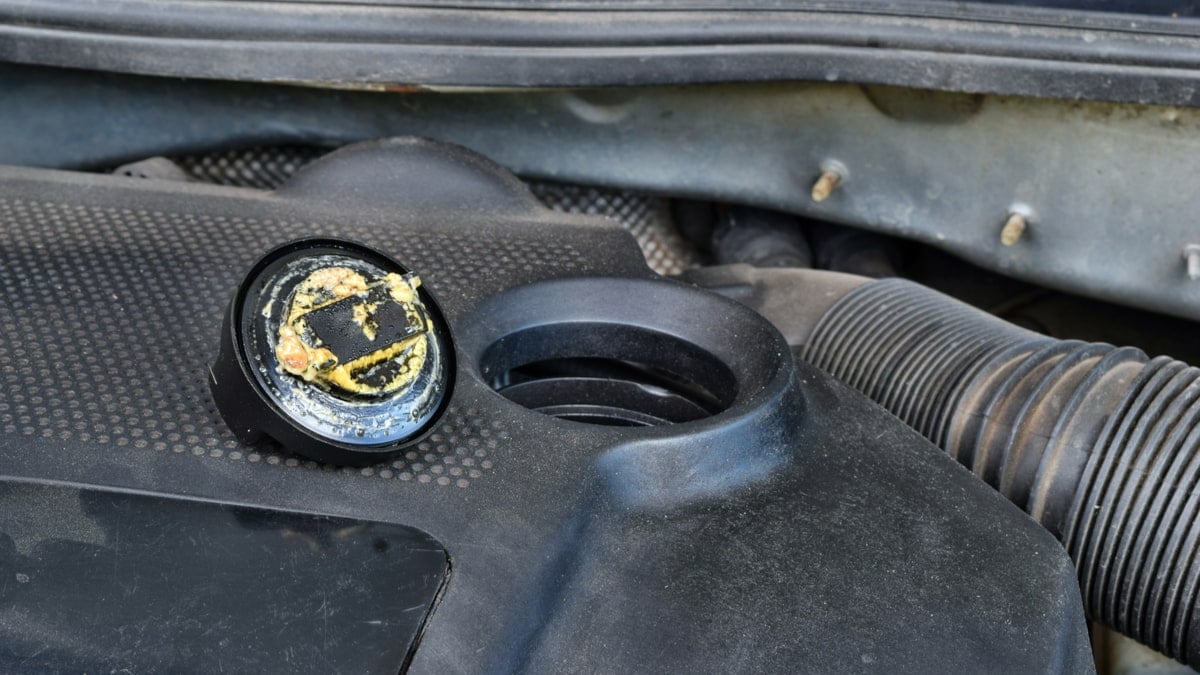 During your regular oil change, you need to take the oil cap off. At this time, it’s wise to perform a quick inspection to ensure everything looks right. If you notice white stuff or milky oil under the oil filler cap, it’s possible there’s a sign of trouble, but it could also be harmless.

In this guide, we break down what the milky white substance could be. We also examine if it’s anything you need to worry about.

What does a milky or white sludge under the oil cap mean?

The white or milky substance indicates that moisture or water is mixing with the motor oil. It turns into a creamy white sludge that sticks to the cap. Water shouldn’t enter the engine or mix with the oil, so it should lead to a closer inspection, but you may not need to worry.

There are legitimate reasons that water got into the engine that won’t lead to a major repair. However, the most troublesome concern is always a blown head gasket, which requires an engine rebuild or replacement to repair.

If you reside in a location dealing with damp and cold temperatures, moisture can build up in the engine. You will first spot this condensation by looking at the exhaust, which will create water vapor as a byproduct.

Many people mistake a milky oil cap with a blown head gasket, which could be true, but the majority of times it’s just normal condensation.

However, as the engine warms up, this moisture should be naturally removed. Evaporation should occur once the engine is running at optimal temperatures. If you aren’t driving your vehicle long enough for the temperatures to rise this high, the water can’t be burned off. What’s left behind is an accumulation of white gunk under the oil filler cap.

Are you using high-pressure power washers to clean your vehicle? If you use the same pressure washer to clean out the engine bay, you might see milky oil under the cap.

The high-pressure spray can push water into the engine, where it doesn’t belong. If water mixes with the oil, it can build up on the oil filler cap. The water can also infiltrate the air filter, the engine oil dipstick, the power steering cap and other locations.

This is the problem no one wants to deal with. If you are sure that nothing external or bad practices aren’t causing the milky white substance, it’s probable that you are dealing with a blown head gasket instead.

The head gasket has an important job. It’s designed to keep the cylinders behind an airtight seal for maximum performance. With this seal, the cylinders can perform their regular duties. Plus, the seal creates the right amount of compression for the engine to run smoothly. It also keeps the coolant and oil from mixing together, even though they are both flowing through the engine.

When the head gasket is blown, the coolant can leak into the engine’s combustion chamber. It will infiltrate the engine oil passages, leading to a milky white substance building up on the bottom of the oil filler cap.

You can check for a blown head gasket by looking closer at the oil dipstick. Allow the car to run until the engine reaches optimal running temperatures. You can also look at the exhaust during this time because a blown head gasket creates white smoke.

Check the dipstick to see what it looks like. If all you see is engine oil, you might not have a blown head gasket. However, if there is moisture or milky oil showing up on the dipstick and a white substance on the oil cap, you can safely assume that the head gasket is the problem.

There are other signs of a blown head gasket to consider during your troubleshooting stage. There could be coolant leaking from below the exhaust manifold of the engine. You could also see bubbles forming in the radiator or coolant overflow tank.

If you keep having to refill the coolant but you can’t find a leak, this is also a top indication because the coolant is leaking internally. If left unchecked, the blown head gasket is going to cause overheating problems since the system isn’t working as it should.

RELATED: How to Test if the Head Gasket is Blown (7 Easy Steps)

If you can’t find anything mechanically wrong, the problem could simply be due to excessive moisture that’s not burning off. This is especially true if you aren’t taking long trips in your vehicle.

If you only drive for five to ten minutes, the engine temperature never reaches optimal ranges. Evaporation can’t occur, which allows moisture to build up in the engine. Not only is this bad for the motor, but it will also lead to a milky buildup.

However, the fix is a simple one and it can be fun. Take your car out for longer drives. If you plan to go somewhere ten minutes away, take a long way and enjoy the scenery. You want to also make sure you are driving at a higher speed whenever possible. The engine warms up faster when you drive 60 mph versus driving down a back road at 15 mph.

When you wash the car engine, you need to be careful that water doesn’t get into the motor. For starters, check the oil cap seal before you get started. If it is damaged or worn-out, it won’t provide a barrier for moisture, so you should replace it.

Once you’ve confirmed that the seal is in good shape, you want to spray down the engine bay with a low-pressure stream of water. You can still use the pressure washer, but be sure to turn it down a notch. Additionally, take care that you don’t spray directly on the engine seals, especially around the valve cover.

The best way to clean the engine is to get a special cleaner and scrub it on with a brush. Once you’ve removed the grime and dirt, you can use a normal spray of water to simply rinse it off, thereby keeping it protected from the excessive pressure that’s not needed.

If the head gasket fails, you don’t have a lot of options. Some people claim that head gasket sealers work well, but a lot of people tell you never to use one. Before you do, make sure you do your own research so you know what you are getting into. Of course, if you need a new head gasket anyway, it probably won’t do any more damage.

The new head gasket is only going to cost you $100 to $300, depending on what type of car you drive. While this isn’t expensive, it’s the labor that could break the bank. Depending on what vehicle you drive and where you take it for repair, you could easily spend $750 to $2,000, if not more.

Additionally, the fix can take some time, so you will be without your vehicle for daily transportation until the shop is finished. If the vehicle isn’t worth this type of repair, it might be time to start looking for a new car instead.