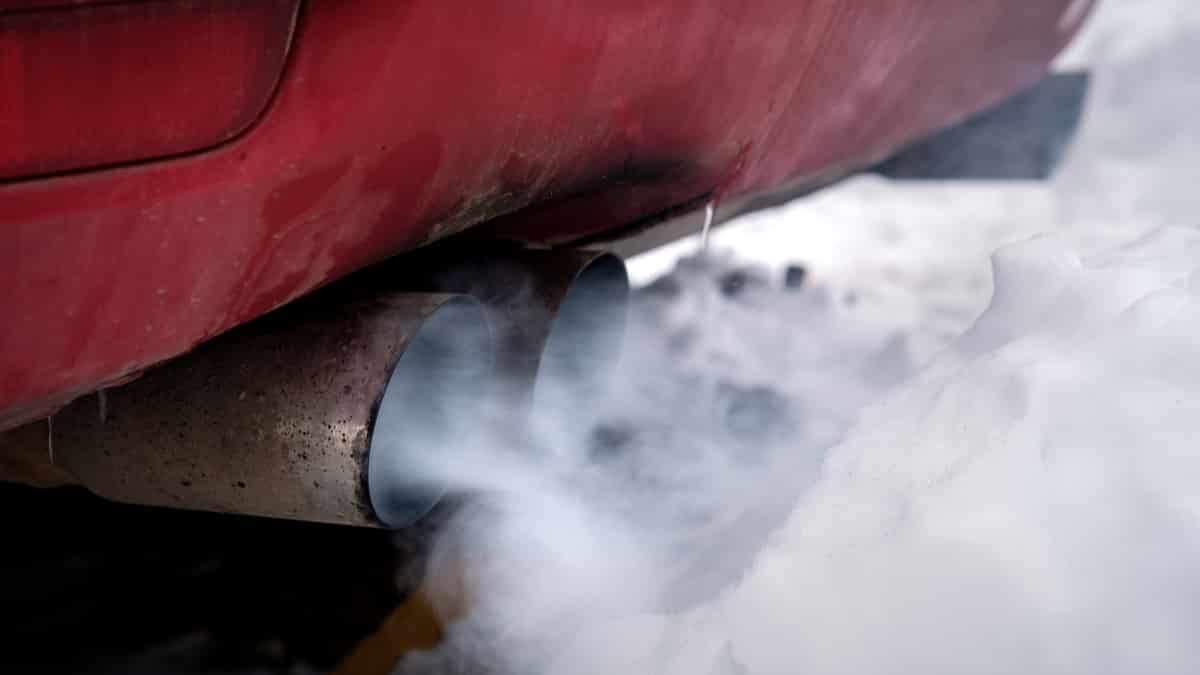 Smoke from the exhaust pipe can be of various types and can be caused by various reasons and situations.

Ranging from blue, grey, white, and blue, every type directly points out different problems with your car.

But what does it mean and what causes white smoke from the exhaust pipe, and will it be expensive to repair? Let’s begin with a quick look at the signs to look for:

Causes of White Smoke Coming from the Exhaust Pipe

The most common cause of white smoke coming from the exhaust is condensation from the exhaust system. It can also be caused by a leaking intake manifold gasket, bad EGR cooler, blown head gasket, or a cracked cylinder head.

White smoke can either be very light, just like a vapor, or it can be dense and heavy smoke. White smoke from the exhaust pipe during startup, idle, or acceleration tells us that coolant or water is getting vaporized in the exhaust pipe.

You can also carefully smell the water or smoke from the exhaust; if it smells sweet, it’s most likely coolant, and in this case, you have a bigger problem.

Here is a more detailed list of the most common causes of white smoke from the exhaust pipe:

The most common reason for white smoke from the exhaust pipe is condensed water that is getting vaporized.

When your car is standing for a long time and hasn’t been used for a day or two, it will be condense created from the last time your car was driven.

This water will lay in the bottom of your exhaust, and once you start the car – the exhaust will get hot and then vaporize the condense.

If the white smoke is light and just coming for a short time after the startup moment at cold starts, there should be nothing to worry about because it’s most likely just condensation.

RELATED: Black Smoke From Exhaust (Causes & How to Fix it)

Now we are coming to a little bit more serious problem, but not too bad. Your intake manifold is the part that is dividing the air going into the cylinders of your car.

Intake manifolds are often cooled by coolant fluid, and therefore they have a gasket between the intake manifold and the cylinder head. It happens that this gasket becomes bad and starts to leak.

If you have a bad intake manifold gasket, you will often smell sweet smoke from the exhaust gases.

If your exhaust smoke smells sweet, it’s most likely a condensed coolant you are facing.

One more common cause of this on modern vehicles is a crack inside the EGR cooler. Not all cars have EGR coolers, though, and it is more common on European cars, but it is definitely worth checking.

This can be pretty difficult to diagnose properly as there are no signs you can look for outside the engine.

However, if the EGR cooler is cracked, it has to get replaced. If you suspect that your EGR cooler is faulty, you may have to get help from a mechanic to diagnose it properly.

The head gasket is a gasket placed between the engine block and the cylinder head. This gasket separates combustion, oil, and coolant between these two parts.

When the head gasket is either damaged or cracked, it can cause the coolant to leak into the combustion chambers or the other way around.

This can cause the engine to combust coolant, and it will result in heavy white smoke from your exhaust, depending on the size of the leak.

Unfortunately, a blown head gasket is often very expensive to repair because you have to disassemble many parts to replace it.

If you want to go further into bad head gasket diagnosing, check out our other article here: Bad Head Gasket Symptoms.

Another not so funny thing that can cause white smoke from your exhaust pipe is a cracked cylinder head or engine block. The engine block and the cylinder head are full of channels where the coolant is flowing to cool the engine down.

If you are very unlucky, it happens that the engine block or cylinder head may crack, and this can cause coolant to flow into the combustion chamber or out through the exhaust.

This is very rare, though and usually often happens after an overheating engine or something similar. It can happen, though, and happens more on some engine models than others.

To fix these problems, you often have to replace the whole head or block, which results in a complete disassembly of the engine.

You can learn more about the different causes of a rich air-fuel mixture here: Engine Running Rich Causes & Symptoms

RELATED: Blue Smoke From The Exhaust (Causes & How to Fix it)

How to Diagnose a Car With White Smoke from the Exhaust

There are several ways to diagnose a car with white smoke. However, some methods are easier and faster than others.

The first thing you should do is to taste or smell the smoke coming from the exhaust pipe. If it has a sweet smell, it’s coolant.

If the smoke doesn’t smell or taste anything more than water, it’s most likely condensation, and the smoke will go away after the car is heated up.

Use a Pressure Tester

The best and only (in my opinion) way to find internal coolant leaks is with a coolant pressure tester. You fit it on your radiator cap, put pressure inside the coolant system, and let it stand for an hour.

Remove the spark plugs or glow plugs and check for any signs of coolant leaks entering the combustion chamber. If you notice coolant, you might have a problem with your head gasket or a cracked cylinder head.

If you can’t find any coolant there, remove the pipes to the EGR pipes and check for any coolant signs inside of them. If you notice coolant, there is most likely a crack in the EGR cooler, and you have to replace it. this kit from Amazon: 8MILELAKE Universal Radiator Pressure Tester Kit

Can you drive a car with white smoke from the exhaust?

Whatever you can drive your car with white smoke from the exhaust or not depends on how much smoke is coming from the exhaust. If you only notice white smoke when the engine is cold during start-up, it is most likely just caused by condensation. If there is always thick white smoke pouring out of the exhaust, it may be due to a bad head gasket and you should not continue to drive the car.

What does white smoke from the tailpipe usually indicate?

White smoke from the exhaust pipe usually indicates either that the car is cold and condensation is evaporating in the exhaust pipe, or that there is a problem with water or coolant being combusted in the cylinders.

Why is white smoke coming out of my exhaust but not overheating?

What color should exhaust smoke be?