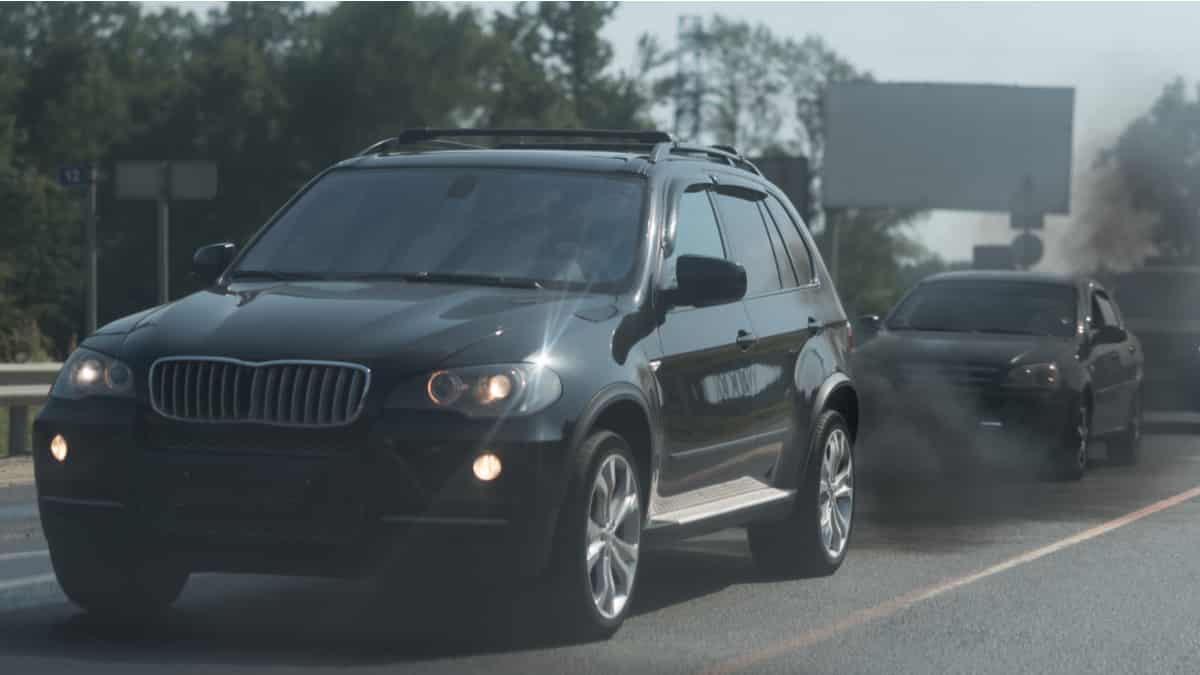 Diesel engines are often looked at as dirty and loud. While black smoke might seem like a common occurrence with these motors, it’s never normal. Still, there’s no reason to panic when you see black smoke from your diesel engine, as most of the causes are easy fixes.

We evaluate the four most common reasons for this smoke to occur. Additionally, we discuss the ways you can reduce black smoke from diesel engines.

How to Reduce Black Smoke from Diesel Engines

To reduce the black smoke in a diesel engine, you want to first inspect and change the engine air filter if it’s dirty. You also want to clean the MAF sensor, inspect the fuel system and use a diesel fuel additive.

Here are some more detailed steps on how to reduce the black smoke from a diesel engine:

The first thing you should do if you want to reduce black smoke from your diesel engine is to check the air filter and replace it if it’s dirty.

Black smoke is a clear indication that the fuel is only being partially burned in the combustion chamber. When the functioning diesel engine burns the fuel, water and CO2 are left behind. Black smoke is an indicator that something is preventing the fuel from burning completely, normally caused by an imbalanced air-fuel ratio.

The first place to look is at the air mixture heading into the combustion chamber. The easiest repair would be to replace the engine air filter, which might be clogged. If there’s not enough air making its way to the engine, the air-fuel ratio is going to run rich, leaving behind unburned diesel fuel.

Symptoms of a Clogged Air Filter

Aside from black smoke coming from the diesel vehicle, you can also expect to experience some other symptoms. The imbalance creates a lack of power, especially during acceleration or if you are pushing the engine hard.

Because the engine isn’t running as it should, there will also be a decrease in fuel economy. You can take the engine air filter out and inspect it. If it looks dirty and clogged, replace it for better performance.

The average air filter only costs between $10 and $75. Changing the air filter is something you can do on your own and it only takes a few minutes.

The air filter should be changed as part of your regularly scheduled maintenance. Check your owner’s manual to find out how often you should change yours, but most automakers recommend every 12,000 to 15,000 miles.

2. Replace or Clean the MAF Sensor

Another issue that could be affecting the air-fuel ratio is a bad MAF sensor. The mass airflow sensor ensures that the right amount of fuel gets mixed with the air entering the combustion chamber.

When the MAF sensor fails, it could read the wrong amount of airflow entering the system, causing more or less fuel to be added than necessary. What you are left with is black smoke from unburned fuel and a long list of other problems.

If you are lucky, it is often enough to clean the MAF sensor carefully with an electronic cleaner. But you need to be very careful so you will not damage the sensor.

Normally when the MAF sensor goes bad, the Check Engine Light comes on. You should be able to read the trouble codes with your OBDII scanner.

However, you might also notice black smoke coming from the exhaust or have trouble accelerating. A bad mass airflow sensor can also lead to a rough idle, poor fuel economy and hard starting.

Labor only makes up about $45 to $70 of the total replacement cost. It’s not difficult to replace most MAF sensors on your own with some basic mechanical knowledge.

The final way to reduce black smoke might be the easiest solution, but it isn’t going to solve all of your engine problems. If the vehicle is older with a lot of miles, the issue might just be caused by accumulated carbon buildup.

Diesel additives are great for accomplishing more than simply fixing the black smoke situation. You can find a variety of fuel additives on the market, each with unique ingredients for a specific purpose.

For example, you might choose to use a fuel additive before winter to stabilize the fuel. You can also pick a formulation that has detergents for a cleaner engine that promotes longevity.

The majority of diesel additives will cost you less than $15 a bottle. You will need to read the directions to determine how often a bottle should be used and how much fuel to put it in.

The best part about using a diesel fuel additive is that it’s simple to use. Just pour the contents of the bottle into the fuel tank when you fill-up. Hopefully, the additive reduces the instance of black smoke and helps you keep your diesel engine in better condition.

The other part of the air-fuel mixture is the diesel itself. The fuel system is made of numerous parts that could be causing the issue. You will want to look at the obvious and simpler parts first.

Start with the fuel filter, EGR system or the injector timing. In some cases, it’s just a matter of having a bad fuel filter or an EGR valve that needs to be replaced. You should also consider that a clogged injector might be to blame. If a fuel injector cleaner doesn’t work, you will need to replace it.

The easiest way to control the fuel system is by checking the trouble codes with an OBD2 scanner. Modern diesel engines control everything electronically and usually, it will tell you when there is something wrong with the fuel system also.

When the diesel engine gets the wrong amount of fuel, you could see black smoke coming from the exhaust. In addition, you might notice a rough idle and poor overall performance.

Additionally, the truck will likely have reduced fuel economy because the engine isn’t running at its best. You may even smell fuel if it isn’t being burned correctly.

The least expensive repair would be changing the fuel filter. On average, a new fuel filter will cost between $50 and $100 for the parts. These should also be changed regularly, between 10,000 to 25,000 miles, depending on the type of filter you use and the manufacturer’s recommendations.