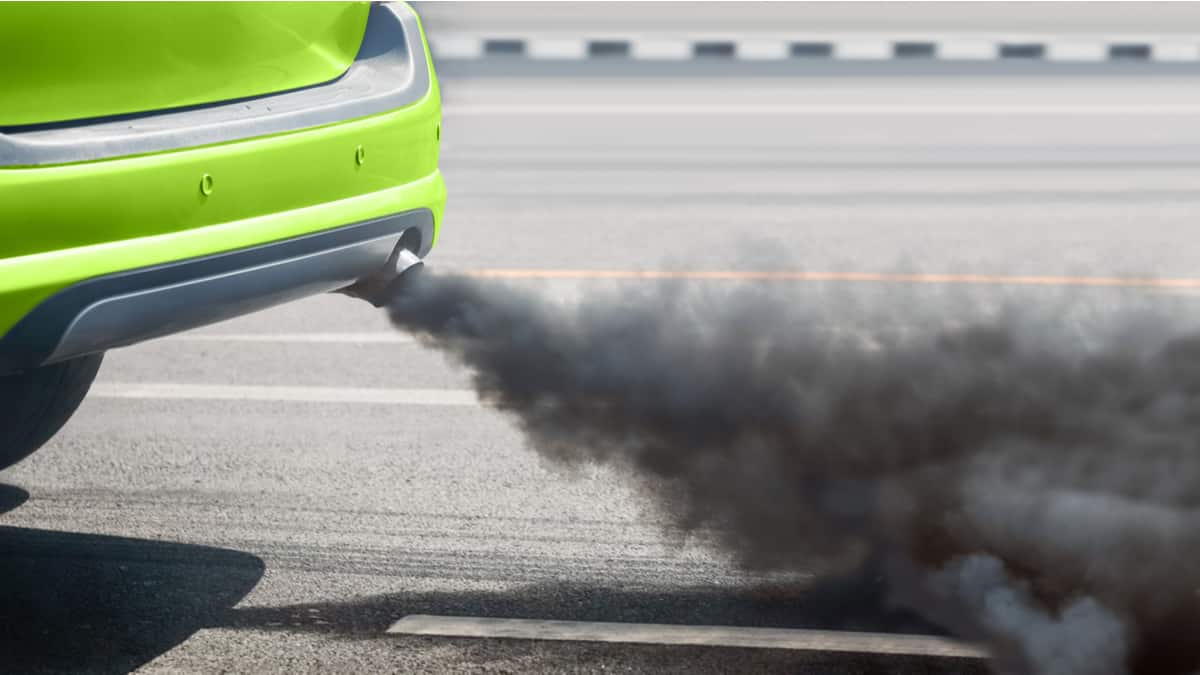 If your car is running as it should, you are seeing a thin layer of water vapor coming out of the exhaust. That’s why it is so alarming to see black smoke from the exhaust. However, you don’t need to worry if you understand what is causing it.

In this article, we examine the meaning of black smoke from the exhaust in both diesel and petrol engines. We also review a few ways to repair it.

What Does Black Smoke from Exhaust Mean?

When black smoke starts pouring out of the exhaust, it means that the engine is burning an excessive amount of fuel. The fuel can be mixed in abundance with oil inside the engine or it might be contaminated. This condition can occur in both gasoline and diesel engines.

There are some cases when black smoke points to a minor problem that can be fixed quickly. However, black smoke can also indicate a serious condition, possibly even requiring an engine replacement.

If dust or contaminants block the air filter, there won’t be enough air hitting the cylinder. Because of this, more fuel is going to be burnt, leading to black smoke in the exhaust.

Additionally, you will notice heavier smoke when the vehicle is put under pressure. If you are accelerating hard or towing heavy loads, there might be more black smoke coming from the tailpipe.

When the fuel injectors work as intended, the fuel gets atomized and spread equally into the cylinder. Malfunctioning injectors might not close properly or they can become clogged, both of which lead to problems.

If more fuel is injected into the cylinders, it causes the engine to run rich. There won’t be enough air in the combustion chamber, which can lead to black smoke from the exhaust.

The EGR valve is responsible for recirculating the exhaust gas to reduce the emissions of dangerous substances. It takes the exhaust gas and puts some of it back into the combustion chamber.

When the EGR valve becomes damaged or faulty on a diesel engine, there aren’t enough gases being circulated. As a result, black smoke will start coming from the exhaust.

The Mass Airflow Sensors evaluate how much air is entering the engine. With this data, the injectors know how much fuel to combine for combustion.

However, when the sensors fail, the wrong data can be sent. This causes the engine to think it needs more fuel than necessary, creating a rich-running environment. When the MAF sensor fails, you will also notice performance issues.

If you have a diesel engine, it’s possible the glow plugs have gone bad. You will notice other symptoms with this problem, such as trouble starting the vehicle.

With a 12-volt test light, you can check the glow plugs. In some models, they are easy to replace, while others can prove to be more difficult.

As the engine ages, deposits start to form, leading to black smoke from the exhaust. The byproducts of combustion start to build up in the injectors and combustion chamber.

Not only can these deposits interfere with engine performance, but they can eventually cause the motor to fail completely. To prevent these deposits, it’s important to use the right type of fuel and choose it from a top-tier station.

How to Fix Black Smoke from Exhaust

For combustion to work as intended, the right amount of air must enter the engine. If there is a lack of air, fuel is only going to partially burn, leading to black smoke.

The first step is to check the air filter and make sure it’s not clogged. This part should be replaced regularly, as part of the regular maintenance. Replacing the air filter should only cost you a few bucks and it is an easy task that doesn’t require any special tools.

RELATED: How to Reduce Black Smoke from Diesel Engines

Deposits and debris from the combustion process can build up in the cylinders and fuel injectors. As the deposits build up, fuel economy is reduced, performance is lowered and black smoke can be seen.

However, there are additives available with detergents that will clean out the deposits. To use these, simply follow the directions on the bottle, generally instructing you to put the contents into the fuel tank after filling up.

If the Mass Airflow Sensor is sending back the wrong information, there will be an excessive amount of fuel in the combustion chamber. You can find the sensor inside the air filter housing.

In some cases, it’s possible to simply clean off the sensor and reinstall it. Other times, you will want to replace it to ensure proper readings.

If you drive a diesel vehicle and haven’t changed the glow plugs lately, now might be a good time. Just like spark plugs in a gas engine, the glow plugs should be changed as part of regular maintenance. You can find the service schedule in your owner’s manual for the proper interval.

Replacing the glow plugs isn’t an expensive task. If you have some mechanical knowledge, you should have no trouble doing it yourself.

Can I Drive a Car With Black Smoke Coming from the Exhaust?

While it’s entirely possible to drive the car with black smoke out of the exhaust, you might not want to. When the engine runs rich, too much fuel is being mixed in the combustion chamber. This problem leads to many performance issues and could cause you to become stranded if the issues become too great.

Even worse, the excessive amount of unburned fuel coming from the exhaust can cause damage to the catalytic converter over time. This is an expensive part to replace. Fixing the problem early can help you avoid this unnecessary bill.