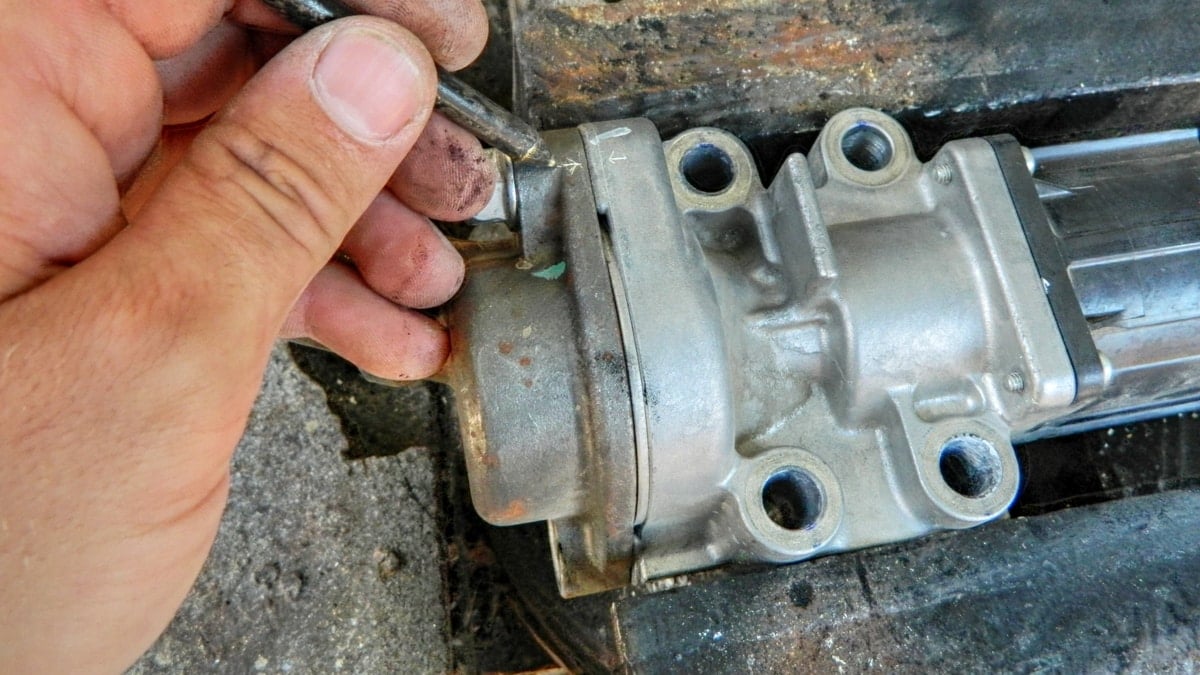 While there are plenty of ailments that can slow down your vehicle, one of the more common with newer vehicles is a bad EGR valve. While these EGR valves have some performance and environmental benefits, they’re notorious for clogging.

If you suspect that your vehicle might have a faulty EGR valve, keep reading, and we’ll break down the most common symptoms you should look for.

Even better, if you do narrow down the problem to the EGR valve, we’ll walk you through standard repair costs and where it’s located on your engine to help speed along with your repairs. Let’s take a look at the signs first.

Symptoms Of A Bad EGR Valve

The most common symptom of a bad EGR valve is a check engine light illuminated on your dashboard. You may also notice bad fuel consumption, reduced power, and rough idle. Your car may also fail an emission test with a bad EGR valve.

Here down below, you will find a more detailed list of the signs of a bad or failing EGR valve to look for:

There’s tons of sensor monitoring your emissions, engine performance, and even the EGR valve’s performance. Whether the EGR valve is clogged, stuck open, or stuck closed, you’re going to get a check engine light.

While the check engine light will usually point you straight to the EGR valve, it is possible that it might come on due to a symptom instead of a cause. For instance, you might get a check engine light that indicates excessive exhaust chemicals or misfires, even though the problem stems from a faulty EGR valve.

Your EGR valve’s primary purpose is to reduce emissions, so you can expect that if it’s not working correctly, your overall emissions will increase. In fact, if you have a faulty EGR valve, your vehicle will most likely fail an emissions test.

You can often notice a slightly more amount of smoke when the EGR valve is bad, but most often it is not very common.

But when the EGR valve is stuck open, the engine will suck in air that is already measured by the MAF sensor, leading to a lean air-fuel mixture and a reduction in fuel consumption. While this might sound like a great symptom, it can damage your engine.

Not only does an optimized engine improve fuel economy, but it also improves engine performance.

You might also notice that your acceleration has become jerky or rough.

If your EGR valve is stuck open, then you’re going to get a rough idle, especially when your vehicle hasn’t warmed up yet. That’s because usually, the EGR valve starts in the closed position.

However, if the EGR valve is stuck closed, you’ll notice more problems while idling after the engine has already warmed up. That’s because the EGR valve is typically open then as it recirculates exhaust to lower the overall temperature of the combustion chamber.

RELATED: Rough Idle Causes & How to Fix it

One of the lesser-known perks of the EGR valve is that it actually reduces engine knocking. Keeping the combustion chamber at a lower temperature prevents the fuel from igniting before it should.

If you can, you need to make repairs immediately before any further damage occurs.

The EGR valve takes specific amounts of exhaust and recirculates it back to the combustion chamber. EGR Valve stands for exhaust gas recirculation valve, which breaks down exactly what it does.

Recirculating the exhaust does a few things for overall performance. First, it optimizes the fuel to air ratio without pulling in extra air from the intake.

Since the EGR valve runs off sensors, it knows when to open and when to close to optimize performance, but when these sensors fail, or the EGR valve gets stuck, then you’ll have problems as a result.

Your vehicle’s EGR valve is typically located at the top of the engine and generally connects to a pipe that runs from your exhaust. If you know what you’re looking for, the EGR valve is usually very straightforward to find and get access to.

It can be hidden deep into engine bays on some models, so to say that it is always easy to locate would be a lie.

Look for a metal tube coming to the top of your engine, then locate the valve that’s attached to it, and you’ve found your EGR valve in many car models! Some car models are totally integrated into the cylinder head, though, and do not have these pipes.

But before you jump straight to replacing the valve, see if you can’t clean it first. Start by removing the EGR valve, spraying it with a carb cleaner, and scrubbing it with a wire brush. If this works, you’ve just saved yourself a few hundred bucks!

But if you narrow down your problem to the EGR valve and cleaning, it doesn’t do the trick. There’s good news and bad news. The good news is that with even a little technical know-how, it’s straightforward to replace. The bad news is that the valve itself is a bit more expensive for such a small part.

While you can find an aftermarket EGR valve for some vehicles for around $50, a more typical cost is closer to $150 and $400. If you’re looking for an OEM replacement part, you’re looking to spend a little more, generally between $250 and $600.

If you’re going to have a mechanic replace the part for you, labor costs often range between $75 and $400. So, while you can save a little money by doing it yourself, you’re still going to be on the hook for the majority of the cost.

The main symptoms of a bad EGR valve include: