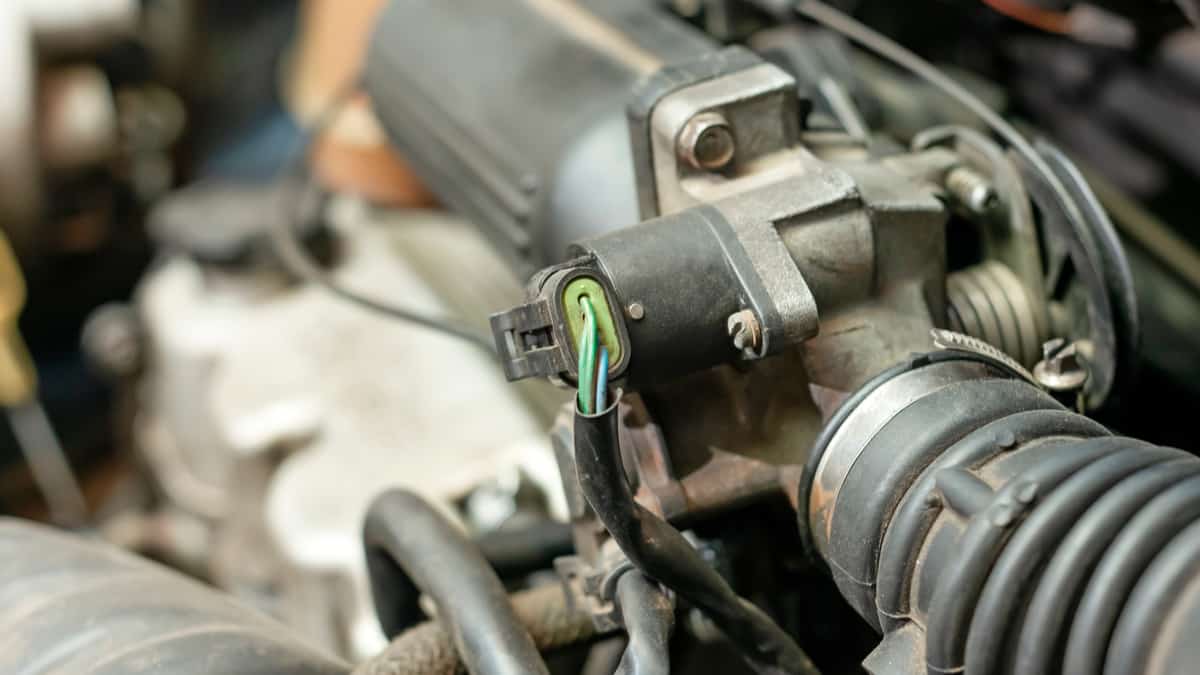 In modern vehicles, dozens of sensors, solenoids, and valves keep everything running as it should. One of those solenoids is the idle control valve, also known as the IAC valve. While this might not be the most glamorous component on your engine, it keeps everything running smoothly, and if it starts to act up, you’re going to want to fix it.

Below we’ve highlighted the four most common symptoms of a bad idle control valve before diving into what it does and where you can find it.

Finally, if you discover that your vehicle’s idle control valve is faulty, we’ll give you an idea of how much you should expect to spend, so you don’t get ripped off at the repair shop.

The most common symptoms of a bad idle control valve are rough idle and a check engine light on your dashboard. You may also notice fluctuating idle speed or a stalling engine on idle when your IAC valve is bad.

Here is a more detailed list of the signs of a bad or failing idle air control valve (IAC) to look for:

There are tons of sensors throughout your vehicle, so it’s no surprise that one monitors your idle control valve. As soon as something doesn’t come back right, it sends a signal to the ECM to let you know that there is a problem.

The most common code is a P0505, which is an Idle Control System Malfunction. But while this is the most common check engine code, it’s not the only one that might point you towards a faulty idle control valve.

Your vehicle’s idle control valve is supposed to keep everything smooth when idling, so it makes sense that if it’s acting up, your idle speed is going to fluctuate. While it depends on what’s wrong with the valve, a fluctuating idle speed is one of the most common symptoms.

Keep in mind that your idle speed will fluctuate even more when you turn on or turn off accessories, as your ECM won’t adjust to the changing load without an idle control valve.

Your idle control valve is supposed to keep everything consistent while you’re idling. But if the valve is stuck open, closed, or somewhere in between, a rough idle can result. You might be able to “fix” this problem by idling at different altitudes or by turning off engine loads. But in reality, you’re not fixing the problem – you’re only hiding it.

Keep in mind that a rough engine idle related to a faulty idle control valve will be because of air or too much air, and it shouldn’t consist of engine misfires or other more serious conditions. If this is happening, it’s indicative of a deeper problem that you’ll need to troubleshoot even if you need to replace your idle control valve.

If your vehicle’s idle control valve is damaged enough, it won’t adjust at all to various conditions. So, while you might not have problems in some conditions, others might make it stall out completely.

Anything from a change in elevation to turning on the air conditioning can cause your engine to stall since it doesn’t have the capability to adjust to different conditions. While this is rare unless your vehicle has a completely shot idle control valve, it’s not unheard of either.

The Function of an Idle Control Valve

Your vehicle’s idle control valve takes all the variances into account and adjusts your engine’s idle speed to keep everything running smoothly. It might not be the sexiest component out there, but without out it, your engine can stall out and you can run into various performance issues.

While you’ve come to expect your engine to maintain a consistent RPM no matter what you’re doing, your engine wouldn’t be able to do this effectively without an idle control valve.

That’s because there is a myriad of conditions that affect your engine’s idle speed. Everything from your current altitude to the number of accessories that your engine is running can impact your idle speed.

Your vehicle’s idle control valve is mostly integrated into the throttle body on modern engines. On older engines, it was an external unit installed somewhere around the ait intake. From there, it can easily control the airflow to your engine to keep a consistent idle regardless of engine and environmental conditions.

The good news is that this is typically near the top of your engine, so if you’re looking to replace it yourself, it’s usually pretty easy to reach. There are few components that easier to access than your idle control valve.

The average idle control valve replacement cost is between $100 and $500. Keep in mind that these costs can vary depending on what you drive and where you take it for repairs. While this might seem like a huge cost variance, this almost all comes from the variance in part prices.

You can find an aftermarket idle control valve for between $50 and $400, and you might need to spend even more if you want an OEM replacement part. Meanwhile, the labor costs are usually pretty cheap, only costing between $50 and $100.

However, this means that if you are looking to try and save a little money by doing the job yourself, you’re not going to save all that much compared to the overall repair costs. But the good news is that there are a few parts that are easier to replace.

Not only will this keep you from accidentally shorting anything in the system, but you’ll also reset the check engine light in the process.

If the idle control valve are integrated into the throttle body you may have to replace the whole throttle body though, which is a more costly story.

The main symptoms of a bad Idle air control valve (IAC) include: