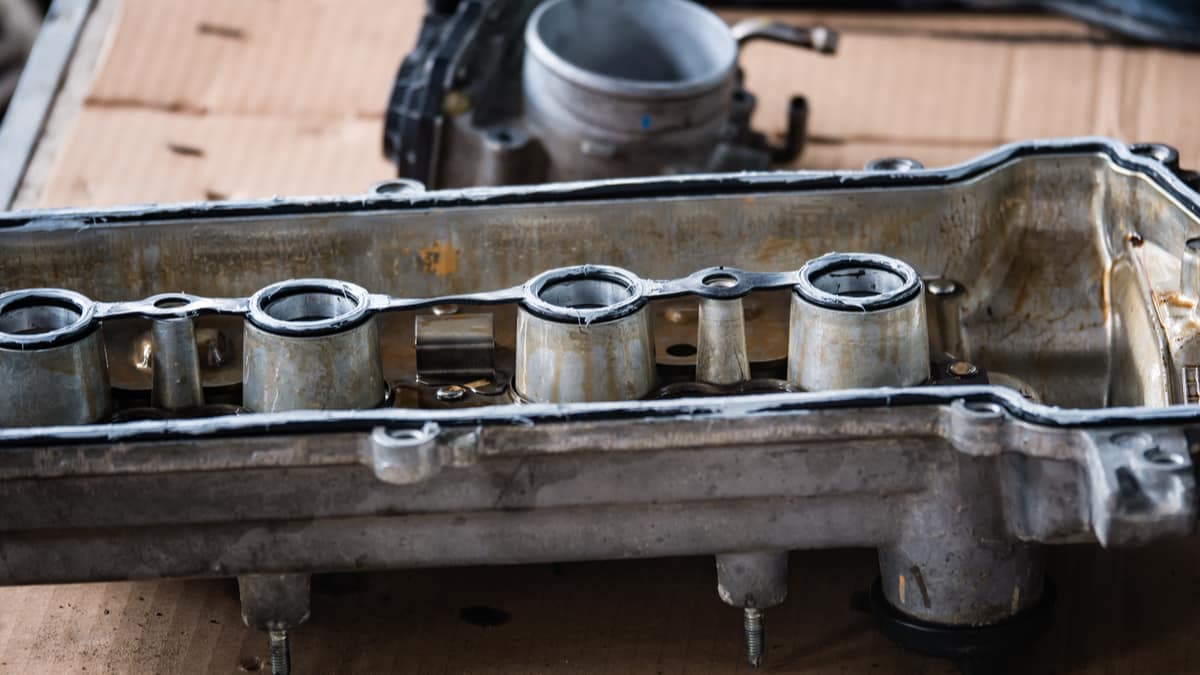 When this part fails, the engine is at risk of significant damage due to oil leakage and poor performance.

Symptoms Of A Bad or Leaking Valve Cover Gasket

The most common symptoms of a bad valve cover gasket are external oil leaks and a low engine oil level when you check the dipstick. You may also notice a burning smell after acceleration. In some cars, it can also result in a misfiring engine or a check engine light.

Here is a more detailed list of the signs of a bad or leaking valve cover gasket to look for:

Whenever you see oil leaking out under your vehicle, it becomes alarming. However, oil leaks are caused by many issues, so it’s not a tell-tale sign of a failed valve cover gasket alone.

Still, if you notice oil leaking from the valve cover area, you can assume that the gasket has gone bad. Inspect the area around the gasket to see if any oil is seeping out.

Initially, the oil leakage will be minimal, getting worse as time goes on. After some time, it could even coat the valve cover surface, causing a thick layer of dirt to also accumulate on the valve cover.

It’s vital to check your engine’s oil levels regularly. When the oil gets too low, it’s often a sign of a problem, especially when it occurs frequently.

The engine operates as a sealed system, so oil shouldn’t be disappearing unless something is wrong. Start by checking the valve cover for signs of leaking.

While you wait for a valve cover gasket repair, make sure you keep topping off the oil. Running the engine without the proper amount of lubrication can cause the engine to cease and fail.

This odor becomes overpowering when you pop the hood, even if you can’t see the oil burning. Whenever you smell burning oil, you should assume that there is a risk of a car fire and stop driving immediately.

RELATED: 7 Causes Why Car Smell Like Burning Rubber After Driving

When the car engine misfires, there are many causes that contribute to poor performance. One of the most common reasons for misfiring is a defective spark plug or issue in the fuel system. However, you shouldn’t overlook the possibility of a bad valve cover gasket.

The valve cover sits above the spark plugs. When the gasket fails and allows oil to leak onto the car’s spark plugs, fluid can get into the openings. As oil builds up, the spark plugs cannot work properly and foul out.

This causes the spark plug to fail, reducing the ignition of the air and fuel mixture. What you are left with is a misfiring engine that creates a rough ride. It can also lead to an engine fire when not dealt with immediately.

Some people rely on the dashboard warnings to tell them when something is wrong. If you haven’t been checking the oil, this might be your first indication of a problem.

The Oil Warning Light might alert you to low pressure or a lack of lubrication in the engine. You might also see the Check Engine Light when there is a valve cover gasket defect. Either one of these indicators is telling you that there is a critical issue that should be addressed immediately.

The engine’s valve cover is designed to protect the components of your car’s motor. Not only does it keep the elements out of the engine, but it prevents damage to the expensive machinery.

The valve cover is sealed with the help of the valve cover gasket. While it is only a thin strip of rubber placed between the valve cover and the engine, the gasket has a significant role. Without it, oil can seep out of the system, leading to engine damage.

Over time, this gasket becomes brittle and cracks. This can be caused by old age or just from the excessive heat in the engine.

The main symptoms of a bad or leaking valve cover gasket include: