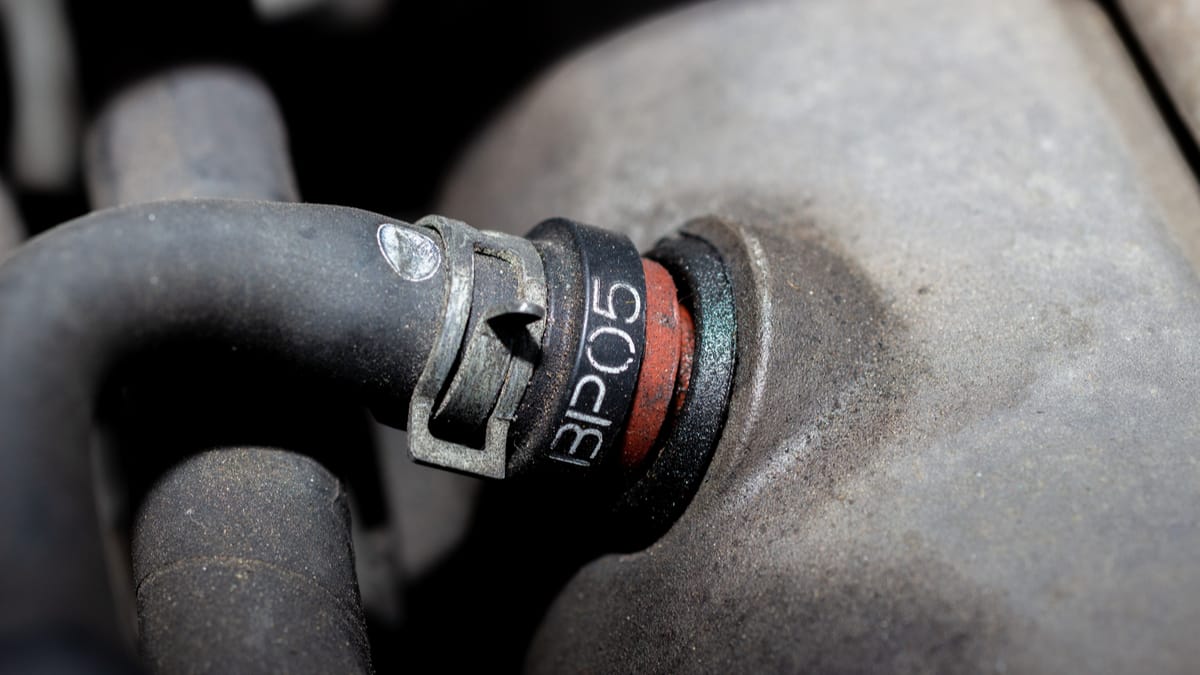 You have probably heard about the PCV valve before in a gas/petrol engine. But you probably didn’t know how important this little plastic part is to the engine. This little piece is known for failing, and the problem occurs in most petrol engines on the market.

Most of the PCV valves are made of plastic hoses with a spring inside. Any plastic would wear out after 10 years, fitted in a hot place like the engine bay, and because of the importance of the PCV valve, you may notice any of these bad PCV valve symptoms when it fails.

Luckily, we will cover these signs more in-depth in this article, and you will also learn everything you need to know about the PCV valve and the replacement cost. Let’s take a look at the signs.

Symptoms Of A Bad PCV Valve

The most common symptoms of a bad PCV valve are rough idle and engine performance issues, along with a check engine light on your dashboard. You may also notice that your engine has high oil consumption and see blue smoke coming from the exhaust.

Here is a more detailed list of the bad PCV valve symptoms:

One of the most common and most noticeable bad PCV valve symptoms is probably a check engine light on your dashboard. When the engine light shows up, there is a trouble code stored in the engine control module.

To read the trouble code from the engine control unit, you have to use an OBD2 scanner. Some older cars with a PCV valve fitted without an electronically controlled engine will not have this symptom.

Because the PCV valve controls the airflow between the crankcase and the intake manifold, a broken PCV valve can have the same symptoms as an intake air leak, which can cause the idle RPM to get too high and other strange idle behaviors like very rough idle.

If you have any strange idle problems, it’s always a good idea to check the PCV valve first.

Rich mixture, you can often see that the car has a little more gray/white smoke than usual, and you can often feel a smell of petrol.

Lean mixture is more difficult to find, but it often causes misfires, as we will discuss next.

Because you can get a faulty lean/rich mixture due to a faulty PCV valve, you can feel misfires on both idle or acceleration when your PCV valve is bad.

If you have a too lean mixture, the cylinders won’t fire up correctly, which can cause misfires. If you have a mixture that is too rich, you can turn off the spark with the fuel and therefore cause a misfire.

When you have a faulty PCV valve, causing a wrong fuel mixture, you can feel that your car has rough acceleration on high and low RPMs.

On most cars, you won’t feel a broken PCV valve on higher RPMs than idle, but it’s worth mentioning because it can happen depending on the valve’s design.

If the PCV valve or the hoses are blocked by moisture, you will get a very high pressure inside the engine crankcase, which will push the pressure up in the cylinders and out from the gaskets.

If you suddenly see several large oil leaks and increased oil consumption in your car, check the PCV valve and the hoses to it to make sure they’re not blocked.

7. White/Black/Blue Smoke from the Exhaust

If the PCV valve or the hoses are blocked, the crankcase will push up oil into the combustion chambers, which will cause oil to burn inside the engine and go out through the exhaust pipe.

A short conclusion is: If you see any strange smoke from the exhaust pipe, make sure that the PCV valve is in good shape.

What is a PCV Valve?

PCV valve stands for Positive Crankcase Ventilation, and it is one of the oldest and most used emission devices in many vehicles. The PCV valve function is to eliminate crankcase emissions from the crankcase and send them to the intake. Therefore, they combust them again in another engine cycle, making the engine’s emissions cleaner and more effective.

Most PCV valves are made the same way; two hosing connectors with a spring-loaded one-way valve inside it. When the engine is idle, you have a lot of vacuum inside the intake manifold, which helps the emissions get sucked out from the crankcase efficiently at lower speeds.

When you are revving up your engine and driving on higher RPMs, the PCV valve will open further and suck out even more crankcase ventilation caused by higher RPM and faster crankcase pressure build-up.

If you have a turbocharged engine, you do not want to boost pressure to go into the crankcase, which would cause oil leaks and blow gaskets. Here, it’s crucial to have a one-way PCV valve.

These valves are designed differently, and the PCV valve only works on idle and low RPMs. Some PCV valves also have 3 connectors for a vacuum, which controls them with electric vacuum solenoids. These can work in a lot of ways, and we will discuss them in another article.

Some common trouble codes appear with a faulty PCV valve. If you experience any of these trouble codes from your engine control unit, it’s probably time to check the PCV valve.

Remember that just because you see these trouble codes, it’s not 100% that the PCV valve is broken. These codes can also be other things, and I always recommend you carry out proper troubleshooting before replacing any parts.

Where is the PCV Valve Located?

Just follow the hose on the top of the car engine, and you will find the PCV valve. Some cars do also have an integrated PCV valve with the valve cover.

The replacement cost of faulty PCV valves can differ significantly depending on the engine and the car you have. However, the PCV valve’s price is often meager, and you can expect prices of around $20-50 for a brand-new valve.

If you think you have the knowledge to replace the valve yourself, you will not suffer from the labor costs, but remember that it can be difficult to replace it if it’s located under the manifold on some cars.

If you want a mechanic to replace it for you, you can expect a labor cost of $30-200, depending on the location and the car type.

Overall, if you have an older car, the PCV valves are often easy to replace and should only take around 10 minutes, while on newer cars, there could be a replacement time of over 3 hours if it’s located under the intake. Sometimes, you have to remove the intake to access the PCV valve; luckily, this is not that common.

Can you clean the PCV valve?

If your PCV valve is clogged, you can definitely clean it. But usually, the spring mechanism inside the PCV valve gets old and bad. PCV valves are often quite cheap, so while you can clean it we recommend replacing it to avoid problems in the near future.

Is the PCV valve necessary?

Is a PCV valve open at idle?

The PCV valve is supposed to be closed or semi-closed during idle so as not to create too much vacuum inside the crankcase. When you press the throttle a little, the PCV valve opens fully to evacuate the crankcase gases.

How often should the PCV valve be changed?

As you can see, most of the symptoms are engine performance problems, which could also be caused by other issues, so it’s important to research the subject carefully.

If you notice any of these symptoms of a bad PCV valve in your vehicle, it’s time to take it to a mechanic and have them check your PCV valve. It’s a small part that plays a big role in keeping your engine healthy, so don’t wait too long to replace it if it needs fixing. Doing so will keep your car running smoothly for years to come!