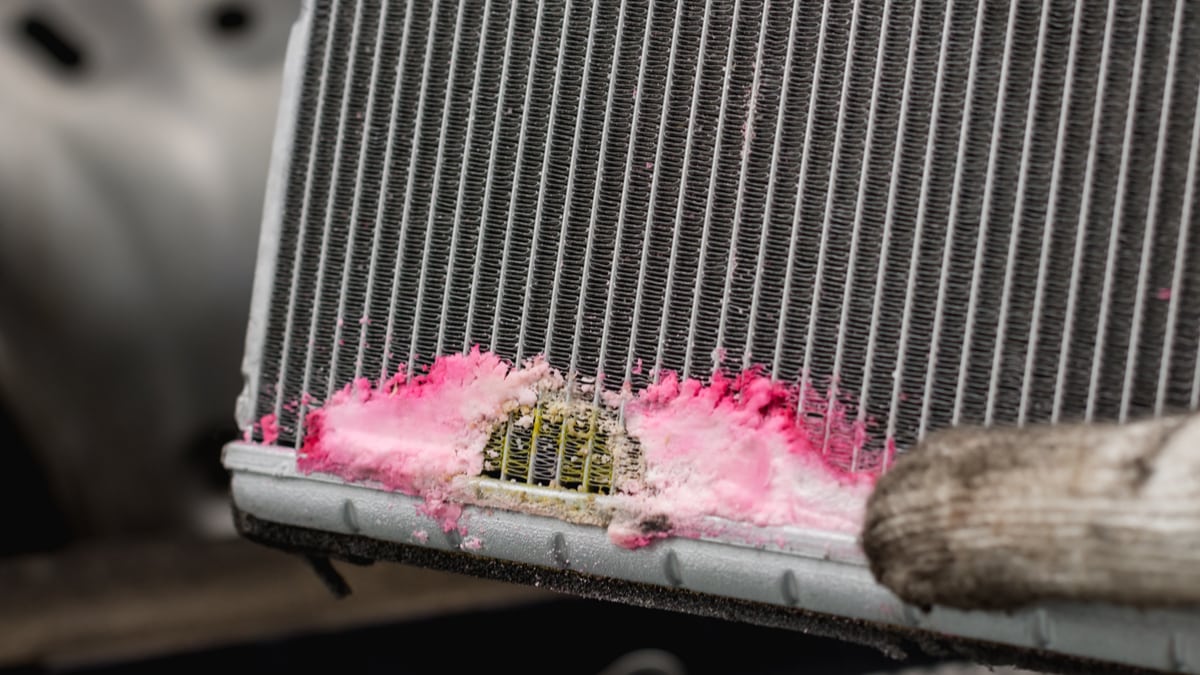 There’s nothing more alarming than heading out to your car in the morning and finding green liquid pooling underneath. The worst-case scenario starts going through your mind and you are already planning out how to purchase a new car. However, there are lots of things that can cause this problem. In fact, there might be a simple fix for that coolant or antifreeze leak.

We discuss the most common causes of a coolant leak. Our guide also reviews some of the best ways to fix a coolant/antifreeze leak as well as the coolant leak repair cost, so you can get back on the road.

What Is Coolant or Antifreeze?

Coolant and antifreeze are essential fluids that keep your engine working at an efficient temperature. With coolant, the engine continues to run at normal temperatures, even when it is scorching hot or freezing cold outside.

Antifreeze contains a concentrated formula made from silica and ethylene glycol. It is meant to be mixed with water to create coolant.

The most common cause of a coolant leak is a leaking radiator hose or a leaking radiator. It can also leak from a failed water pump or a defective expansion tank. It’s very common to find leaks around hose clamps and from cracks in plastic tubes in the cooling system.

Here’s a more detailed list of the possible causes of coolant leaks:

The radiator is subject to a lot of abuse, sitting at the front of the vehicle the way it does. Corrosion is one of the main reasons that a radiator fails, leaving a hole behind that can allow coolant to escape.

Additionally, the sealing gasket located between the radiator and tank can wear out, causing a leak. There could also be a leak coming from one of the hoses connected to the radiator. Over time, these hoses become brittle and simply fail.

One might not consider the impact this small cap has on the cooling system. The radiator contains a lot of pressure, with the cap responsible for holding it all in.

When it’s working correctly, the cap creates a solid, reliable seal that ensures the system runs with optimal pressure. Over time, the seal to this cap starts to deteriorate, allowing coolant to seep out.

The car’s head gasket is responsible for keeping the engine oil and coolant separate. When the gasket first fails, you may not even know what’s happening because the leakage can be internal.

However, you might start to notice coolant in the engine oil or vice versa. You will also see the engine temperatures start to rise. Eventually, the coolant will begin leaking outside of the engine, indicating a serious issue.

The water pump is responsible for circulating the coolant through the system. Usually, the water pump is driven by a belt. This belt connects to the engine crankshaft, but this part is subject to corrosion and leaks.

The water pump itself can also suffer from external damage that leads to a leak. Either way, if the pump isn’t working right, the coolant can’t move properly, which will cause the engine to overheat.

Next to the car engine, you will see a plastic container that holds coolant. It gets connected to the radiator with a hose. Its primary job is to feed coolant to the radiator as needed.

However, time causes the plastic to become weak. It can easily crack and start leaking. The hose running to it can also deteriorate and leak.

How to fix a Coolant Leak

Because many different issues can cause an antifreeze leak, there are also many things you can do to repair the leak. We do always recommend replacing the leaking part, but here are some other methods you can use:

What do you do if you are in the middle of nowhere and your radiator is leaking? If you have some eggs in the trunk, you might be able to buy yourself some time. However, this fix isn’t recommended unless you have no other options.

Allow the car to cool down and unscrew the radiator cap. Crack a couple of eggs and put them in the radiator reservoir. If the leak doesn’t stop, you can try a few more eggs.

As the eggs cook, the fluid pressure will try to push them out through the holes. If all goes well, the egg will get clogged in the holes and stop the leak temporarily. However, the eggs can also lead to further damage, which is why some mechanics won’t recommend it.

There are also special additives for fixing coolant leaks instead of eggs. There are reports of cooling systems getting clogged by using them, so be very careful. However, if you have an ancient car that is not worth repairing, it can be worth trying.

All of the hoses are held on with clamps. If one fails because of rust or corrosion, you will need to replace it.

Allow the car to cool down. Locate the defective clamp. If it is in some positions, you might need to drain the coolant into a bucket. Take off the affected hose and remove the old clamp. Put the new clamp on and tighten it down.

Fill up the radiator with fresh coolant and tighten down the cap. Run the car until it reaches normal operating temperature. Inspect the repair to ensure no more coolant is leaking.

If there is an issue with the hose itself, you will follow many of the same procedures as when you replaced a clamp. In fact, you might consider swapping out the clamp while you have the hose off.

Allow the car to cool down and locate the bad hose. You may need to drain the coolant into a bucket, depending on where the hose is.

Take off the clamps holding the hose in place. Replace the hose with a new part and clamp it back down. Fill the system with fresh fluid and run the car to check for leaks.

Every radiator is installed differently, depending on the style the manufacturer uses. However, you will have some similar steps with every radiator replacement.

Allow the car to cool and disconnect the automotive battery. Drain all of the coolant from the system by pulling the plug out of the bottom of the radiator. Make sure you dispose of this coolant properly.

Remove any hoses that connect the radiator to the engine and take off the thermostat. If there is a fan mounted to the radiator, you need to remove that too. Take off any bolts holding the radiator to its mounting bracket.

Take out the old radiator and replace it with a new one. Put the system back together in reverse, replacing any other worn-out parts in the process. Fill up the radiator and start the engine to check for leaks.

The cost to repair a coolant leak is between $10 and $3000. A new clamp or hose might not cost you much, but an entire radiator replacement might cost between $300 and $1,200 for parts and labor, while head gasket repair can easily cost $2,000 or more.

The easiest way to save money is to get your coolant leak repaired at the first sign of trouble before it turns into something more significant.