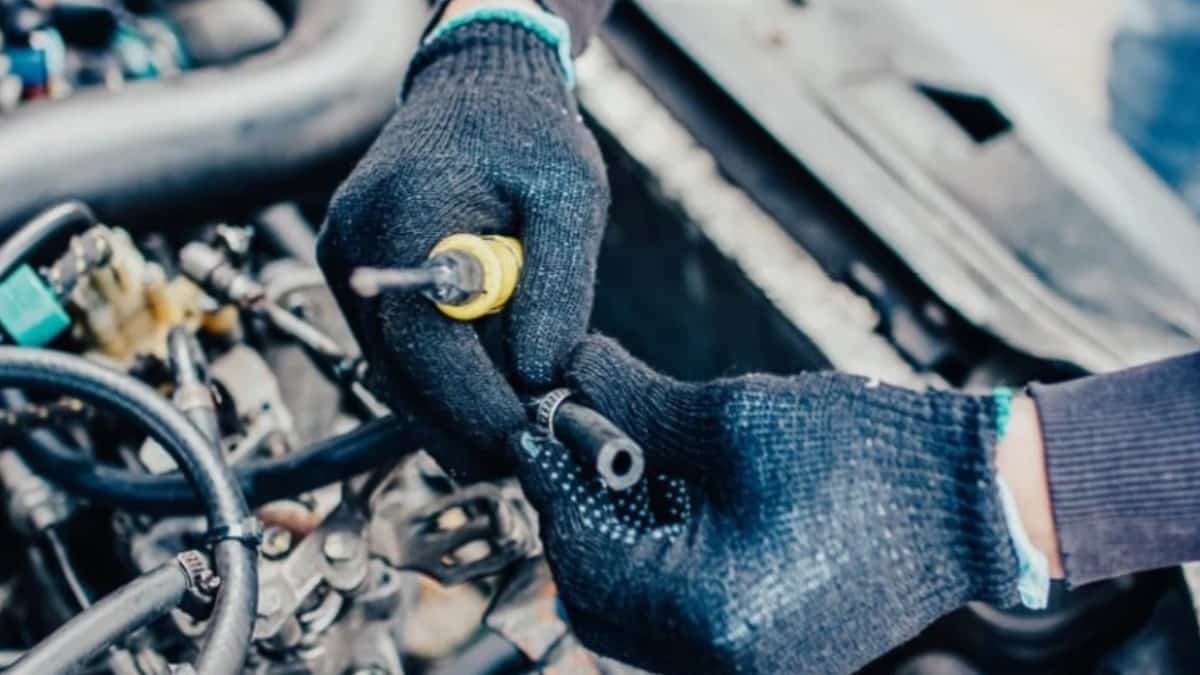 There are several reasons that your vehicle might be suffering from an EVAP leak. We look at the meaning of the EVAP system, determine what a leak is and look at the cost of repairing this fault.

Most importantly, we determine if it is safe to drive with an EVAP leak.

Table Of Contents show
What is the EVAP Function?
What is an EVAP Leak?
What Causes An EVAP Leak?
Symptoms of an EVAP Leak
1. Fuel Smell
2. Check Engine Light
3. Poor Engine Performance
4. Hard Start
5. Failed Emissions Test
How Much Does it Cost to Repair an EVAP Leak?
Is it Safe to Drive with an EVAP Leak?

What is the EVAP Function?

EVAP stands for an evaporative emission control system. The function of the EVAP is to keep harmful fuel fumes where they belong, in the tank instead of out in the atmosphere.

With a properly running EVAP system, air pollution is kept to a minimum. Additionally, the crucial system ensures the odor of fuel doesn’t reach the cabin of the vehicle.

What is an EVAP Leak?

An EVAP leak means a leaking Evaporative Emission Control System. Also, a trouble code indicating an EVAP leak tells you there is a problem with the evaporative emission control system. There are many parts that make up this system, so it’s imperative to read the diagnostic code fully.

The leak could be coming from the gas cap, vacuum feed line or gas tank filler tube. It might also be from the charcoal canister or vacuum control valve.

What Causes An EVAP Leak?

The most common cause of an EVAP leak or an EVAP leak trouble code is a gas cap that wasn’t properly secured. This typically happens right after filling up the car at the gas station.

Many people head to the mechanic when the Check Engine Light comes on only to realize that the gas cap hadn’t been tightened correctly or if you didn’t shut off your car engine while you were refueling.

If the gas cap is properly secured, then there could be a more serious problem. It could be due to a leak in one of the hoses or a defective O-ring seal. There might also be a malfunctioning leak detection pump or faulty purge valve.

The best and most efficient way to find a leak is to use an EVAP smoke machine.

Symptoms of an EVAP Leak

The most common symptom of an EVAP leak is a fuel smell coming from your car and a check engine light on your dashboard. You may also notice issues like poor engine performance or a failed emission test in rare cases.

Here is a more detailed list of the most common symptoms you may notice when you have an EVAP leak.

One of the most obvious signs that you are facing an EVAP leak is the smell of fuel. The gas you put into your vehicle is liquid, but it becomes a gas form in the system, creating many fumes.

The smallest fault in the EVAP system can allow a vapor leak that creates a noxious odor. You won’t have any trouble recognizing the smell and will immediately know something is wrong. It’s never safe to have gasoline vapors escaping the system, which is why you want to have it checked out right away.

One of the first symptoms of an EVAP leak is also the presence of the Check Engine Light. Typically this goes hand-in-hand with a fuel smell.

However, the Check Engine Light can mean so many things. The only way to tell for sure if it is a leak is to run a scan with your diagnostic tool.

When a leak exists in the EVAP system, your engine might not be able to run as it should. Not only could you experience rough idling, but there might be trouble with acceleration too.

Without the right amount of fuel in the system, the gas-air mixture becomes unbalanced. Combustion must occur perfectly for the engine to run right, but it can’t when there is a leak.

When the system has a leak, air could get into the fuel system. This problem creates an imbalance to the air and fuel ratio, causing trouble when it comes time to start the engine.

If you are having trouble getting your car started, it doesn’t automatically mean a leak. That’s why it’s vital to have a professional look at your vehicle.

Sometimes, drivers don’t even know there is a leak until they head to have an emissions test. Failing the emissions test is a sign that something might be wrong with your EVAP system.

If the system can’t direct the vapors into the combustion chamber of the engine or filter them out with the tailpipe, they will leak out of the car in other ways. This situation leads to an excess of pollutants that will flag your vehicle during the test.

How Much Does it Cost to Repair an EVAP Leak?

The EVAP leak repair cost depends on what type of code you are facing. Replacing a broken gas cap only costs you about $10, while the price to replace an EVAP canister is much more. In fact, these canisters can often cost $200 or more just for the parts.

The best way to diagnose the fault is to use an OBDII scanner. This diagnostic tool will lead you in the right direction, showing you where to look for the leak. If you can fix the problem yourself, you can save a lot of money.

Is it Safe to Drive with an EVAP Leak?

Technically, there’s nothing stopping you from driving with an EVAP leak. However, it’s never wise to travel while gas fumes are infiltrating the cabin or the atmosphere around the car.

When the Check Engine Light comes on, inspect the gas cap first. If that isn’t your problem, head to a professional to have the system looked at.