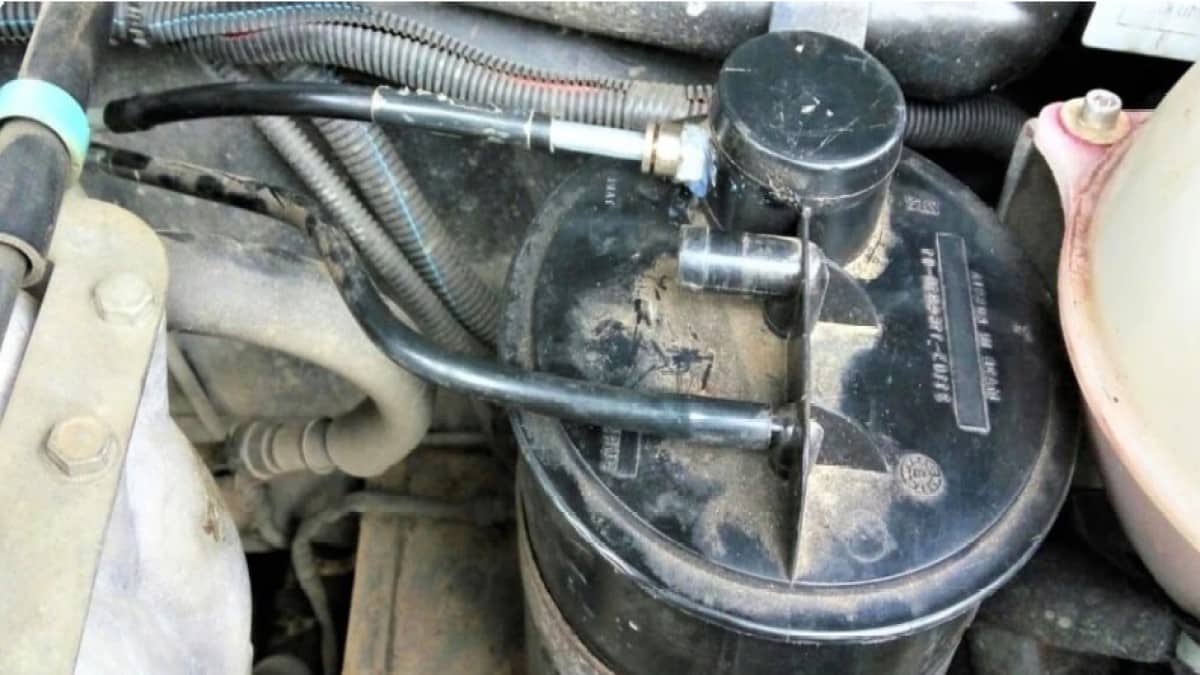 A charcoal canister, also known as the EVAP canister, is probably something you heard about before but never really put a lot of effort into understanding what it is.

It is not very common for the charcoal canister to fail, and it is often hidden under the vehicle, so it is not so strange that it gets forgotten sometimes.

But what actually happens when this strange part fails, and how much will it cost? Let’s take a look at the common signs to look for.

The most common symptom of a bad charcoal canister is a check engine light on your dashboard. You may also find it difficult to fill up the fuel tank at the gas station without making a mess. You can also hear a hissing noise when opening the fuel tank cap.

Here is a more detailed list of the signs of a bad or failing charcoal vapor canister to look for:

The engine control unit is constantly monitoring all sensors in your car engine, and if one fails, it will store a trouble code and show a check engine light on the dashboard to notify you that something is not as it should be.

This is exactly what can happen if the charcoal canister has gone bad. The EVAP system is a closed system that needs to hold a specific pressure. If the engine control unit notice that there is a leak in the system or if it is clogged – the check engine light will show up.

To know exactly why the check engine light is showing up, you need to use a diagnostic scanner to check the trouble codes.

2. Issues Filling up The Fuel Tank

The fuel fumes are going through the charcoal canister, and if the canister is clogged – the fumes will struggle to pass, and it will create high pressure in the fuel tank.

The same applies when you refuel your car. Fuel goes into the tank, and therefore gases and air needs to go out.

If the charcoal canister or fuel vapor vent line is clogged, the air will not be able to flow out when you pour fuel in – and this will cause the fuel hose nozzle to shut off, and it can even cause the fuel to pour out everywhere except in the fuel tank.

Because the same reason as we mentioned before, when the charcoal canister is clogged, it will create a higher overpressure or underpressure in the fuel tank than usual.

This is most noticeable when you are about to refuel your car, and you hear a lot of air going out or into the fuel tank when you open the fuel tank cap, which creates a hissing noise.

A little bit of under or overpressure in your fuel tank is fine – but if it seems to be a lot more than usual, you do probably have a problem with the EVAP system.

If your Charcoal Canister has a split in the body, this can cause the canister to lose its stored fuel vapor. Instead of being stored inside the canister before being sent through the vent pipe and the purge valve, a damaged canister body could result in the vapor being released into the atmosphere.

This fuel vapor has a strong smell that will be noticeable when the engine is running and also whilst the engine is switched off.

If you’re noticing a strong fuel smell from your vehicle, even when it’s not running, then your Charcoal Canister is a good place to start in the diagnostic process.

Many countries and states have yearly emission tests that you need to pass for your car to be legal on the streets. During this test, your vehicle’s emission levels are checked to ensure that the fumes that exit the exhaust are meeting regulations.

If your fuel canister is faulty, it could be misfueling your engine and therefore cause your vehicle to fail its emissions test as a result.

As with any fault on your vehicle that causes the engine to misfuel, your exhaust will often put out various colors of smoke depending on what the fault is. If your exhaust has started excessively smoking, this could indicate that your engine is being misfueled.

This misfueling could be a result of your Charcoal Canister not operating as it’s designed to. Although it’s uncommon for a Charcoal Canister to be causing excessive smoke, it would be wrong to say that it never happens!

An easy test would be to blank the vent pipe from the Charcoal Canister and see if the exhaust smoke changes. If so, then this would also point towards a fault with the canister.

The Function of a Charcoal Canister

The Charcoal Canister or vapor canister works by absorbing the fumes that the fuel in your tank produces as a byproduct. Instead of these fumes being vented out into the atmosphere – which isn’t very eco-friendly – they’re absorbed by your Charcoal Canister. The charcoal in the canister has been engineered to be extra absorbent, making it especially effective at absorbing the vapor given off by your fuel.

As this vapor builds up inside the canister over time, it will reach a point where it needs to release some of it. This released vapor gets pushed through the canister’s vent line and purge valve into the engine, where the vapor gets burnt off.

The charcoal canister or vapor canister is usually located under the vehicle, often very close to the fuel tank. It is often hidden under plastic covers, so it can be difficult to locate it. It can sometimes also be located in the engine bay, especially on European cars.

Locations for your Charcoal Canister can vary greatly depending on your vehicle make/model, though.

It’s worth noting that I’ve found these canisters in wheel arches on some of the European brands.

If you’re struggling to find it, your local dealership should be able to supply you with a component location.

The chances of replacing your fuel canister are very slim, but it does definitely happen if you have a high mileage car.

The charcoal canister itself is often relatively cheap, and you can often find it around 100 bucks.

The replacement is often quite easy, and often sometimes you can do it with some basic knowledge within an hour. It is located really badly on some cars, so you need to check it up before replacing it.

The main symptoms of a bad charcoal vapor canister include: