5 Symptoms of a Bad or Clogged Radiator (Replacement Cost) 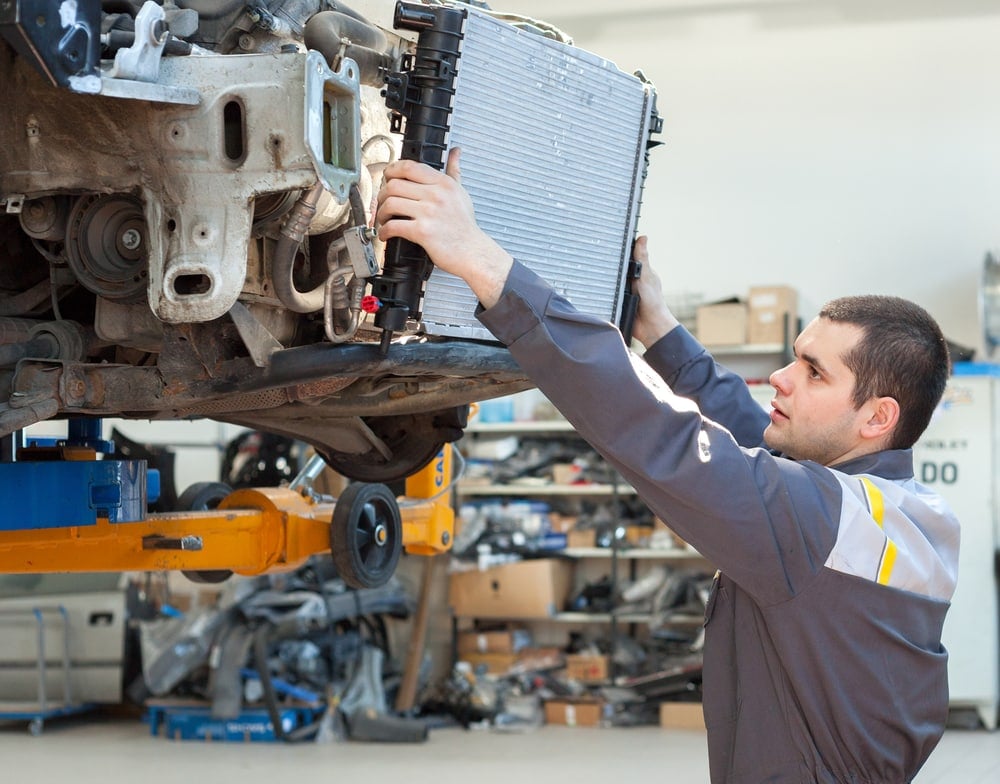 There are few components more well-known than your radiator. But while you might know where your radiator is, knowing how it works and how to tell when something goes wrong is a different story.

If you suspect that you have a faulty radiator, keep reading. We’ll cover the five most common signs that you have a defective radiator, how it works, where it’s at, and how much it costs to replace. When you’re done reading, you’ll know for sure if your vehicle’s radiator is the problem – and have you well on your way to getting repairs.

Moreover, just because you have a radiator leak or an overheating engine doesn’t mean it’s for sure the radiator. We’ll break down each symptom and walk you through everything you need to know below.

If you’re watching your temperature gauge get precariously high, that’s a sign that something is not working as it should. If the engine gets too hot, it’ll just shut off, which means that the problem has progressed to something a little more serious.

But an overheating engine can be a wide range of problems, including a faulty thermostat, a broken fan, or coolant leaks. You’ll need to do a little more troubleshooting to pinpoint the problem.

One of the most common problems with a faulty radiator is a leak. While you’ll usually see leaks underneath your vehicle, that’s not guaranteed. Take a look around your radiator – if you notice any white streaks or coolant puddles, then your radiator has a leak and needs repairs.

RELATED: How to Fix a Coolant Leak

Another common problem with radiators is damaged fins. Radiators sit at the front of your vehicle, but the fins are one of the easiest components to damage. While a few smashed fins won’t make your engine overheat, the more smashed fins you have, the less coolant flow you have in your radiator.

Additionally, smashed fins mean there’s a higher possibility that you have a leak.

One of the biggest radiator killers is corrosion. While corrosion shouldn’t be happening inside your cooling system, as the coolant wears down the likelihood of corrosion building up increases.

Since the corrosion is on the inside of your radiator, you won’t be able to see it, but it will discolor the coolant. Try a coolant flush if it’s old coolant, but if it’s relatively new and already severely discolored, you have significant corrosion in your system.

Try a radiator flush to see if you can free up enough of the passageways but be prepared as you might have to replace the radiator.

Visible corrosion is often the first sign that you’re about to have a more significant problem. Corrosion leads to blown seals, worn down fins, and a litany of other potential issues. While a little corrosion isn’t a huge deal, you should get your radiator looked at by a certified mechanic if there is an excessive amount.

The Function of the Radiator

The radiator is a critical part of your cooling system. As your coolant passes through the engine, it heats up and given enough time and no cooling method, it will continue to heat up until your engine overheats and shuts off.

Your radiator acts as an integral part of the system that cools your coolant. The coolant travels from one side of the radiator to the other through the small metal fins you see. By thinning out as it goes through the fins, it becomes easier to cool.

Your vehicle does this with the help of an engine fan and by having air naturally flow over it as you drive. This is why the manufacturer puts your vehicle’s radiator at the front of your vehicle.

The radiator is one of the most straightforward components to find on your vehicle. It’s always located at the front of your vehicle – that way, it can utilize airflow as you drive to aid in the cooling process.

When you’re locating your vehicle’s radiator, simply look for the larger of the two components and you’ll be in good shape. However, if you’re trying to gain access to your radiator you might run into problems, as it’s often tightly packed between other components.

The average radiator replacement cost is between $550 and $800, depending on the car model and labor costs. While this is an expensive cost, the good news is that a mechanic can repair many radiator problems.

For instance, if one of the fins has a small leak, a certified repair shop can weld the leak shut, saving you a ton of money. Additionally, if the inside of your radiator is gunked up, a mechanic might be able to save it with a coolant flush for about $100.

Just keep in mind that if the flush doesn’t work, you might be in the same predicament and have to replace your radiator.

If you’re mechanically inclined and are trying to save a little money, you can replace your radiator yourself. While typically a little more involved, an aftermarket radiator typically costs between $100 and $200.

When you add in the price of the new coolant that you’ll need – you’ll likely spend around $250 to complete the repairs yourself. If you opt for an OEM replacement part, you can expect to spend a little more in parts compared to an aftermarket replacement.

Hi. I am Ndumiso from Keiskammahoek. I am drivi ng nissan almera 1.6 luxury 2004 model. Problem: water boils in the resevour bottle and it starts heating. No water in the radiator. New radiator cap but thermostat is taken off. I therefore want to know what might the problem be?