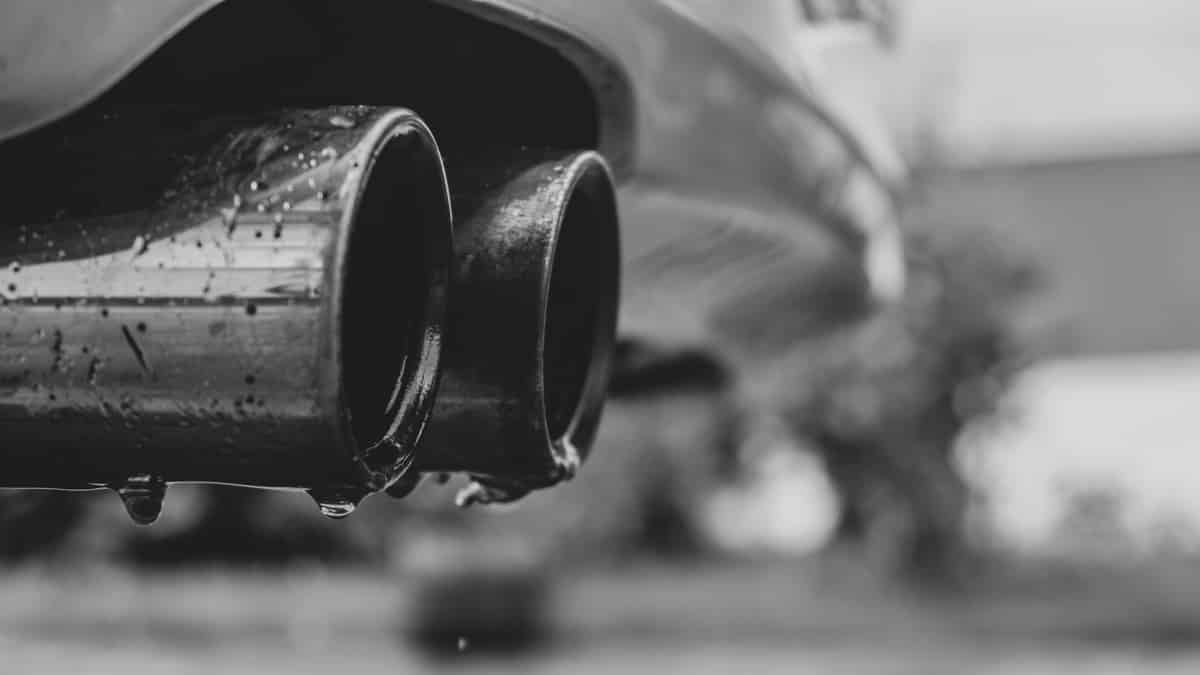 Your car’s internal combustion engine releases exhaust gas as part of its normal operation. If these gases were to remain in the engine, it could be very dangerous. However, it is just as alarming when you see something other than gases coming out of the exhaust, such as water. What are some of the causes of water coming or dripping out of the exhaust?

In some cases, the water is considered a normal byproduct of the operation. However, there are other times when you should take the leaking fluid seriously and have it checked out. Let’s take a look at the possible causes.

Table Of Contents show
Water is Dripping Out of Your Tailpipe Causes
1. Water Condensation
2. Catalytic Converter Condensation
3. Head Gasket Failure
4. Defective EGR cooler
5. Defective Pistons or Rings
Cost to Fix Water Coming from the Exhaust
Frequently Asked Questions
Is it normal for oil to leak from the exhaust?
What could cause water to drip from the exhaust pipe while idling?
What does brown liquid mean when dripping from exhaust?
What could cause water dripping from the muffler?
Wrap Up

Water is Dripping Out of Your Tailpipe Causes

These causes are the fast list of the main causes of water dripping from the exhaust pipe. Let us take a more in-depth look into the most common causes:

The most obvious reason you will see water coming from the exhaust is due to condensation. This process is completely normal and happens for a variety of reasons.

During the internal combustion process, carbon dioxide, nitrogen and water vapor are formed. As the gases leave the combustion chamber, gases are being mixed with the water molecules. As the engine cools, water condensation often becomes visible, especially from the tail pipe.

If the water droplets stop after a few minutes, there’s nothing to worry about. Otherwise, you might have a larger problem on your hands.

As with the condensation coming from the engine, you may also be dealing with water vapor from the catalytic converter. Remember, the cat is changing the chemical makeup of the gases, thereby creating more water molecules.

In the conversion, water vapor can make its way out of the tailpipe. As with the previous condensation, this should resolve itself within a few minutes and is considered a normal function of the exhaust system.

While the previous reasons weren’t anything to get alarmed about, a head gasket failure is. If the water coming from your exhaust is due to a blown head gasket, you have a serious problem.

The blown head gasket often comes with white smoke coming from the tail pipe and water droplets. You may also see air in the coolant reservoir or your engine might begin overheating. Either way, you want to get the problem resolved quickly before you need a complete engine replacement.

If the water coming from the tailpipe smells sweet, it could definitely be caused by a broken EGR cooler if your car is equipped with one.

Worn-out piston rings or a bad piston only cause water to come from the tail pipe if the head gasket is also blown or there is already condensation in the exhaust. Additionally, bad pistons and rings can lead to other symptoms.

You might notice a sooty exhaust, oily residue coming from the exhaust or blue smoke. Either way, you don’t want to continue driving with bad pistons or rings.

Cost to Fix Water Coming from the Exhaust

If the water is caused by normal condensation, there’s nothing to repair. However, both a blown head gasket and defective pistons or rings should be dealt with immediately.

The cost to repair a blown head gasket is between $1,000 and $2,000, but not because of the parts. Instead, this repair takes a long time, leading to higher labor charges. Additionally, the cost to replace defective pistons and rings is between $1,000 and $5,000, mainly because of how labor-intensive the job is. If either of these situations is left unresolved, it will lead to needing a complete engine replacement.

Is it normal for oil to leak from the exhaust?

Oil leaking from the tailpipe is never a good sign, as it indicates serious engine trouble. The only way for oil to get into the exhaust system is by entering the combustion chamber. Potential causes for this include worn piston rings, damaged valve stem seals, or a faulty PCV valve. But whatever might be causing the problem, you should fix it as soon as possible to prevent any additional damage to the engine or the catalytic converter.

What could cause water to drip from the exhaust pipe while idling?

In most cases, it’s perfectly normal to have water dripping from the exhaust while the car is idling. This happens because the catalytic converter turns a portion of harmful exhaust gases into water vapor, which may condense inside the exhaust system. Still, a coolant leaking into the engine’s combustion chambers shouldn’t be ruled out here. If that’s the case, the watery substance from the tailpipe will feel greasy when you run it between your fingers.

What does brown liquid mean when dripping from exhaust?

The brown liquid coming from the tailpipe is, in most likeliness, rust dissolved in water. Cars that are frequently driven on short distances only are usually affected by this issue. This is because the water vapor within exhaust gases condenses against cold muffler walls, which need some time to warm up. The condensed water will gather on the muffler’s bottom, where it will eventually cause corrosion. Taking your car regularly on a longer trip will prevent this from happening, as it will burn out the water from the exhaust.

What could cause water dripping from the muffler?

Water dripping from the muffler can happen as a part of the vehicle’s normal operation. When running optimally, the engine produces water vapor as a part of its exhaust gases. And this vapor may condense and turn into water while going through exhaust pipes and mufflers. This is especially true if it’s cold outside or the vehicle hasn’t yet reached its running temperature. If this is the case there, water dripping from the exhaust is no reason for concern, especially if you frequently drive your car on short distances.

When running, the engine generates exhaust gases as a byproduct of the combustion process. One of the exhaust gas components is water vapor, which in most cases, exits through the tailpipe in a gaseous state. However, if the outside temperatures are low or if the car is driven for short distances a lot, this vapor may condense inside its exhaust system.

The resulting water can gather up within the muffler, from where it may drip out when the engine is running. While this is perfectly normal, a coolant leaking into the engine’s cylinders shouldn’t be ruled out, as this may have a similar effect.