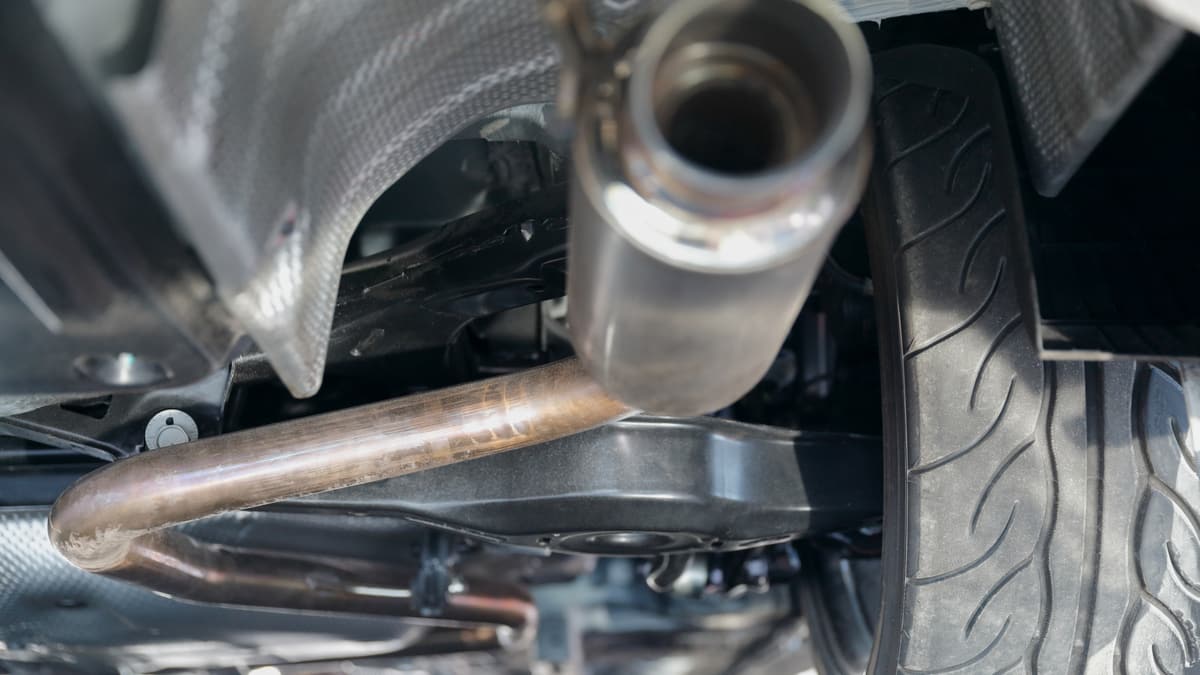 If you want to make your car louder, you know there are expensive upgrades you can apply that will alter the car’s sound dramatically. However, not everyone has the money to add all of these parts. Instead, you need to stick to a budget.

In this guide, we cover some practical tips for increasing the exhaust sound. Our guide outlines the average price of each option, so you know how much money needs to be saved.

How is Exhaust Sound Generated?

What makes the sound that’s coming out of the exhaust? Power is generated through the combustion process of the fuel and air mixture in the engine. As this power is created, sound waves travel out of the vehicle through the exhaust system.

On the way out of the car, the sound waves and exhaust gases go through several parts, including the catalytic converter, muffler and resonator. Each of these parts changes the sound that is coming out of the vehicle. If you want a more aggressive sound, you must alter the parts in some way.

How to Make Your Car’s Exhaust Louder (Ranked by Price)

To make your car’s exhaust louder, you can increase the exhaust sound by taking off the muffler. You can also remove the catalytic converter or install a cat-back exhaust. Consider putting on a performance muffler, cold air intake, turbocharger, straight pipe exhaust, or aftermarket exhaust if you have the money.

Here is a more detailed list of the different ways to make your car’s exhaust louder by budget.

These holes should be drilled before the muffler but after the catalytic converter. If you put it before the cat, you could allow dangerous gases to enter the atmosphere. As the engine releases sound, the waves will make their way through the system, but a few will escape through the holes before they can be quieted through the muffler.

However, this method is definitely not recommended over the others as it can lead to more exhaust fumes in the cabin which is bad for your health. It can also lead to your car failing a smog test. If you have an annual inspection of the car in your country, it can also cause problems.

By taking the muffler off of the exhaust, you remove the part that creates the silencing action. You will need to replace the muffler with a pipe welded into the system. If you find some suitable pipes, you can also use exhaust clamps, although welding is often the best way. You may need to weld mounts for the rubber hangers though.

This muffler delete action substantially changes the way the car sounds, making it louder. This will often also cause a much more aggressive exhaust sound. However, it’s not legal to perform in all US states.

The resonator has the opposite effect of the muffler. Instead of bouncing the sound waves around to silence them, the resonator tip is going to vibrate the waves, leading to a slightly different sound, not necessarily much louder. However, not all car models use a resonator, so in this case, it is just called an exhaust tip.

It isn’t difficult to install the resonator or exhaust tip. You will clip it to the exhaust system’s tail. You also don’t need a lot of money to get this job done. Unfortunately, this will often not make a big difference to the car’s exhaust sound, but it can make a small difference, it’s easy to install and it will give a better appearance to your car’s look.

The catalytic converter is used to reduce the hazardous byproduct of the emissions. It also reduces the sound coming from your car.

You can bypass this system with the help of a downpipe or a fitting pipe instead of the converter. Instantly, you will notice a boost in the sound level. However, it’s also normally against the law to do this procedure, so your vehicle might only be good off-road once it is done. It also isn’t going to pass the emissions inspection without the cat.

The engine control module also uses O2 sensors to measure catalyst efficiency, and by simply removing the cat, you can get a check engine light on your dashboard and a P0420 code on your scanner. You need to reprogram the ECU to bypass this issue if you choose to delete it.

The performance muffler is going to change the way the sound comes out of the exhaust. While it may still suppress some of the sound waves, it can also increase the overall tone.

The performance muffler has fewer plates in the construction and it features a hollow design. With the easy gas exit, not only will the sound be increased, but performance can be boosted. Not all performance mufflers are legal, so check your local laws before installing one. However, it’s often a better choice than removing the muffler completely.

While nothing changes with the exhaust itself, the sound coming from the engine is louder and more aggressive, which creates a different tone when it exits the exhaust. If your car has a turbocharger, it will also make this cool turbo chirping sound more noticeable when you let off the gas pedal and change gears.

The turbocharger itself does not make your car’s exhaust sound higher, it will actually do the opposite most of the time – but it will definitely make your car engine sound better. The turbocharger also adds more air to the combustion chamber to boost horsepower and torque.

The upgrade won’t change any of the exhaust parts, but the increased performance will create a different overall sound for the vehicle.

However, this is a costly upgrade that isn’t worth the expense unless you are looking for a major boost. After you have added the turbocharger, you may also need to replace other parts such as the fuel injectors, and also change the map of the engine control module to work with the higher fuel requirement.

If you are really looking to make your exhaust sound louder – a lot louder, a straight pipe exhaust is your best choice. Changing the exhaust to a straight pipe design means you must get rid of multiple exhaust components. You will remove the catalytic converter, resonator and muffler while adding in a straight pipe instead.

To make the straight pipe operate correctly, there might be some tuning involved, which can dramatically increase the price. However, you are going to gain a whole new sound to the exhaust while most of the restriction is eliminated.

If you are ready to make some big changes and you have the money to invest, it’s best to install a complete aftermarket exhaust system. It’s the perfect way to maximize how much airflow is permitted, allowing for a super loud sound.

The standard stock exhaust from the manufacturer is very restrictive, looking to quiet the sound as much as possible. By removing these restrictions, the aftermarket exhaust perfects the way the airflow should be. However, you want to choose something that’s specifically meant for your goals and is designed to work with your vehicle. If you aren’t sure what’s best, you should talk with a professional.

You can either choose to replace the entire exhaust pipe from the exhaust manifold with an aftermarket exhaust system or choose a cat-back exhaust system. Catback exhaust pipes are the most popular choice and this means that you replace everything from the catalytic converter and back. You can find many cat-back exhausts on the market and they will give your car a louder and deeper sound, yet still have a functioning cat.

The aftermarket exhaust offers another benefit you might not have thought about. Because there are fewer airflow restrictions, the engine performance will also be increased. The engine breathes better, there are fewer blockages and you will notice a profound difference after the installation.

Is It Illegal to Make the Exhaust Louder?

There are plenty of ways to make the exhaust louder that are legal to perform. On the other hand, you could do a lot of these steps and find out that you are breaking the law. If you eliminate any exhaust parts, such as the muffler or catalytic converter, you could end up in trouble. Emission restrictions are very strict, with some states requiring regular inspections.

That’s why it’s important to check your local laws and regulations before you make any exhaust modifications. Additionally, if you aren’t sure how to make the modifications, it’s best to have a professional do the job. You don’t want any exhaust gas infiltrating the cabin, which could be dangerous for you and your occupants.