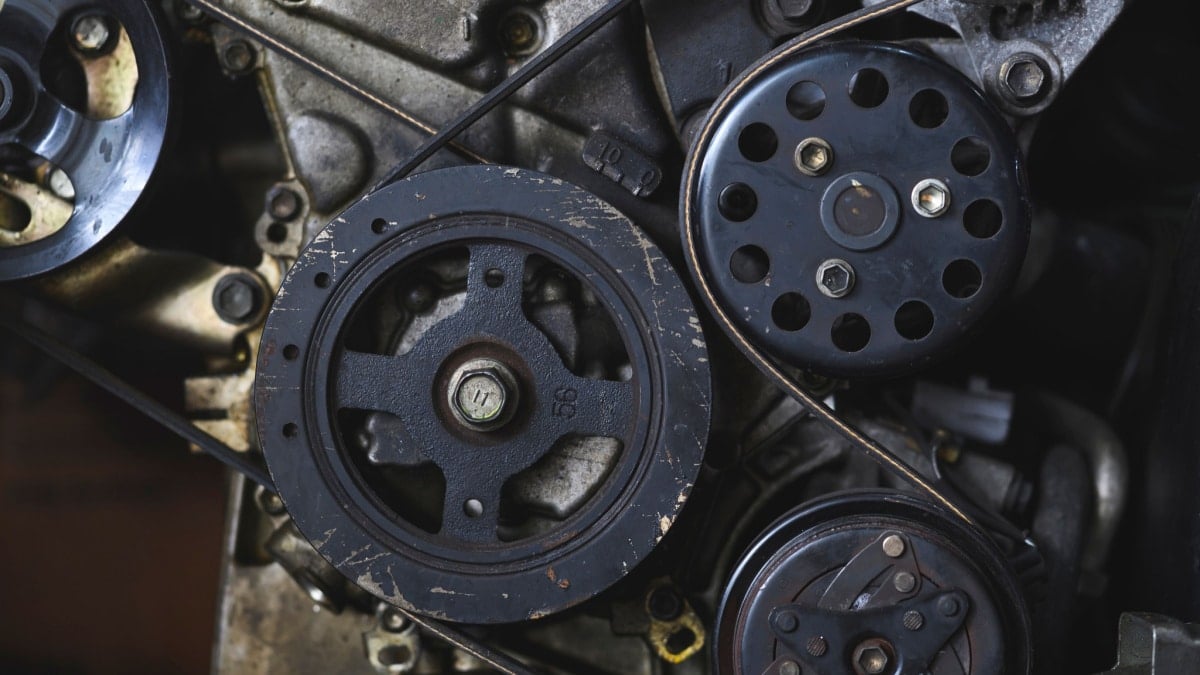 As you head down the road, nothing can be more annoying than serpentine belt noise. This squealing belt sound is enough to stop you in your tracks, but it doesn’t need to bring an end to your journeys. By understanding how to deal with the serpentine belt squealing noise, you can head back out quickly without too much interruption.

In this article, we cover all of the causes of serpentine belt noise and show you how to diagnose the problem. We also give you tips to fix it and show you how much you might spend. At the end of our guide, you will gain some answers to your top questions.

Squealing serpentine belt noise can be caused by a worn-out belt, a bad tensioner, or a stuck pulley or bad idler pulley. It can also be caused by something less mechanical, such as exposure to coolant or simply from the cold weather.

Serpentine belts aren’t meant to last forever. Because of the synthetic rubber construction, you can expect a life between 50,000 and 100,000 miles in most vehicles. As the belt starts to wear out, the ribs cause it to move rougher across the pulleys.

As the belt drags slightly, a variety of noises can occur, including squealing. The noise may become louder as the belt fails completely until it finally breaks.

The serpentine belt must be regulated by the drive belt tensioner. It’s a unique pulley that’s connected with an adjustable pivoting function to guide the belt.

When the tensioner fails, it can no longer hold the belt as tight as it should. With the belt becoming loose, strange noises are sure to follow. You may notice them becoming worse as you step on the gas pedal. Additionally, when the belt becomes too loose it can come off and cause damage.

Around the belt system are various pulleys that help spin the accessories like the power steering, alternator and AC compressor. These pulleys contain spinning grooves to keep the belt moving smoothly.

If one of the pulleys wears or the accessories get stuck and turn with a lot of resistance, the belt will slip on the pulley. You may hear a squeaking or chirping sound. In addition, this can lead to even more damage to the serpentine belt and slipping. For this reason, you do not want to postpone the correction.

Along with the other pulleys we’ve discussed, there’s also an idler pulley that plays a role in the system. This idler pulley is also responsible for keeping the belt moving in the right track.

If it becomes damaged or misaligned, the belt won’t move properly. It can start to slip and cause additional wear to the belt, along with the squealing noises you hear.

Mechanical failure isn’t your only problem. If you get coolant or antifreeze on the belt, you could also notice some squealing sounds. Even a small amount can cause a lot of problems, which is why you need to be cautious during maintenance.

Additionally, antifreeze can drip onto the belt if there’s a leak in the hoses. Either way, the coolant is going to damage the belt and lead to squealing. You will probably need to replace the belt.

When temperatures drop, many aspects of the car are affected, including the serpentine belt. If you only hear the squealing when the temperatures are low, you may not have to do anything to fix it yet. Once the engine warms up, the belt should stop squealing.

Still, it’s best to have it looked at, just to be sure. In fact, the cold weather can lead to faster damage as the material of the belt becomes more brittle.

How to Diagnose Serpentine Belt Noise

The first thing you should do is pay attention to what’s happening. If the squealing only occurs when the car is cold and stops as soon as it warms up, you may not have a big problem.

That’s why it’s important to take note of when the sound is occurring. You also want to listen closely to where the sound is coming from.

When you are ready to diagnose the problem, the first place to start is with the belt itself. Most of the time, the belt needs to be changed because it is old and brittle. After all, this belt endures a lot of friction and constant motion.

If you see any cracks on the belt, it’s getting close to snapping and you should take immediate action. Even if the wear is only minimal, you are better off replacing it sooner than later, before bigger problems occur.

If you recently added coolant to your system and might have dripped some on the belt, this could be causing your problem. Additionally, if there are any leaks in the system, the belt might be contaminated.

Sadly, you can’t easily clean off the coolant from the belt. It’s going to absorb into the belt and lead to permanent damage. Your only way to get rid of the squealing is to replace the belt.

If the belt is loose, it’s going to squeal. Once you’ve performed an inspection, you want to move onto the pulleys if there’s nothing physically wrong with the belt.

As the belt spins, there should be no slack. If there is, you need to tighten up the pulleys. This job isn’t generally difficult and normally doesn’t require taking off the belt to complete. However, if the pulley needs to be replaced you will need to remove the belt. Modern pulleys are usually automatic, and if the tension is bad, you may have to replace the pulley tensioner.

If the above steps haven’t revealed the problem, you are going to need some more support. You may not want to reach out to a mechanic, but it’s necessary if you have hit a dead end.

Research some local auto repair shops to see who does a good job in your area. Most likely, you shouldn’t have to pay more than an hour or so of labor to figure out what’s wrong.

How to Fix Serpentine Belt Noise

1. Get Diagram of Serpentine Belt

There’s a reason that the serpentine belt has the name it does. It generally snakes around several accessories and pulleys in a strange format. The path this belt weaves is unique to your vehicle and you must know how it goes before you take it off.

You can take a picture of how the belt is installed. There could also be a diagram under the hood of the car. If you can’t find it anywhere else, you want to get a copy of the service manual. Putting the belt on the wrong way will lead to disaster.

Before you take off the belt, you must release the tensioner. The tensioner is going to hold the belt tight, so you don’t want to take it off until the pressure is released. Most designs use one of two ways to release them.

It could have a ½-inch square cast to the tensioner arm, requiring a belt tensioner tool or breaker bar. With other designs, you may be able to use a socket with the pulley to remove the tension.

Once the tension has been removed, you are ready to take the belt off. Use caution with this step because you don’t want to cause damage to any of the pulleys or other equipment on the route.

Once the belt is off, you will be able to inspect it better. If misalignment led to the wear, you want to fix this now before you put the belt on, as a new belt isn’t going to fix the problem.

With a straightedge, you can align the pulleys. It’s also important to clean off the pulleys so there’s no grime sticking around.

Take the time to spin all of the pulleys, including the idler pulley and tensioner pulleys. They should spin without any obstruction and there should be no noise. You also want to turn the pulleys to the power steering, alternator and AC compressor to ensure they spin freely. You also don’t want to see any play side to side. If you notice problems, replace the pulleys while the belt is already off.

With your new serpentine belt in hand, you are ready to put it back in position. Snake it through according to the diagram you set aside earlier. Once it is in position, you want to release the tensioner to make it tight.

Double-check that the belt is centered across the pulleys and isn’t slipping off anywhere. Once you have inspected your work, you are ready to start the car.

Start the car engine and allow it to idle for a minute. You can watch the serpentine belt to see that it’s rotating correctly, but do not put your hand in its way while it’s moving.

Once you think everything looks good, take the car for a drive. Listen to ensure that all of the squealing noises are gone.

On average, you may spend around $50 to get a new serpentine belt. If you can replace this belt yourself, there’s no additional cost for labor. If you need to hire a professional, you might spend another $50 to $150 to have it installed.

The labor cost depends on the make and model of your vehicle. Some vehicles are much harder to install a belt on than others.

The belt will typically squeal, but it’s also known to make a clunking, chirping and squeaking sound. The noises often imitate what you would expect with a bad accessory bearing, which is why many people have trouble diagnosing the problem.

Can I Drive With a Squealing Serpentine Belt?

No, it’s recommended to change the serpentine belt at the first sign of failure. This belt is responsible for driving many vital components, including the power steering, air conditioning and the alternator. If it fails, it can lead to serious damage and these components will stop working.

Is a Serpentine Belt Expensive to Fix?

With most vehicles, replacing the serpentine belt is an inexpensive fix. You may only spend around $50 for the parts and another $50 to $150 for the labor. Some vehicles make it much more complicated to install a serpentine belt, so you could spend more on labor.

What Happens if the Serpentine Belt Breaks While Driving?

The serpentine belt runs many vital components. If the belt breaks, you could lose power to the steering system, the air conditioning could go out and the alternator could stop working. Additionally, if it runs the water pump, it could stop the flow of coolant, causing an overheating engine.

How Long Will a Squeaking Serpentine Belt Last?

Depending on what rubber material the serpentine belt is made from, it could last 50,000 to 100,000 miles if it’s in good shape. If it’s squealing, it will drastically shorten its lifespan. Friction and heat are detrimental to the belt, causing it to wear down over time, even with regular maintenance. Once it starts squeaking, it should be inspected right away.

There are a few things that can cause your serpentine belt to squeal, and all of them should be fixed as soon as possible. Don’t ignore the problem, as it will only get worse and may eventually lead to more expensive repairs.

Follow our guide to ensure your car continues running as it should and you can rid yourself of that dreaded noise once and for all. If you are not sure how to fix the problem yourself, take it to a professional mechanic, and they will be able to diagnose and fix the problem easily.