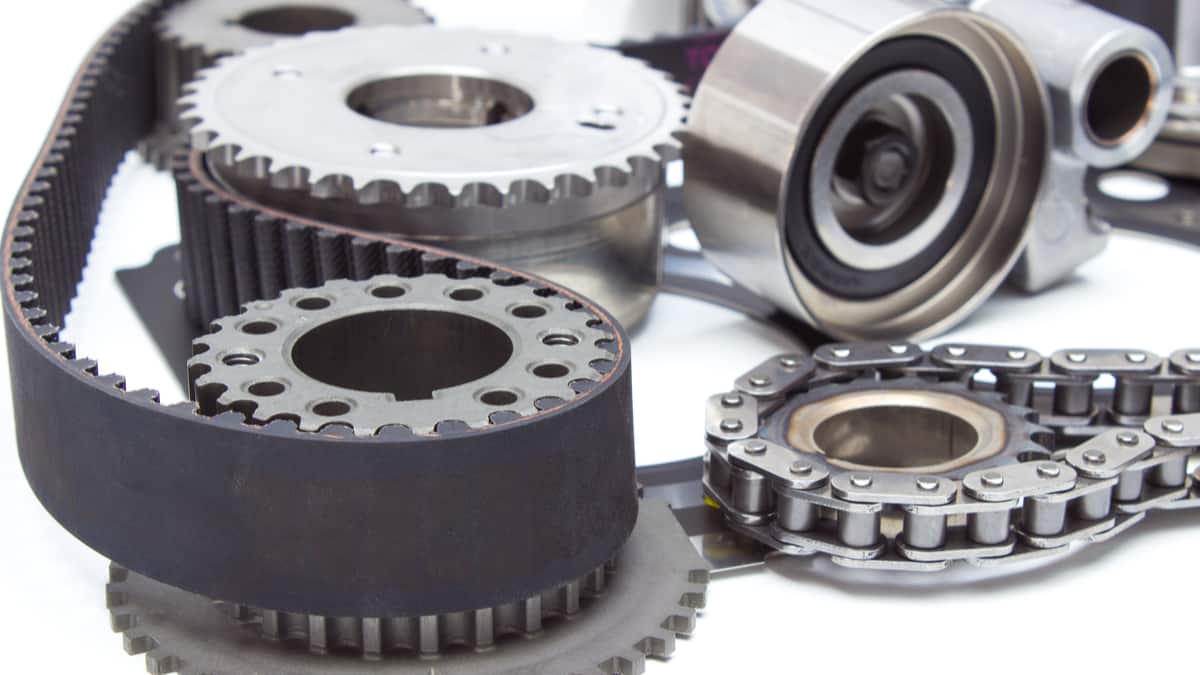 But whether you’re researching a new vehicle or are just trying to gain a little more insight into these critical components, we’ve got you covered here.

This is just a quick answer to your question, and there is much more to it. Read on to learn everything you have to know about the differences to find out which one is better.

What Is a Timing Belt/Timing Chain?

As the name implies, timing belts and timing chains control the timing of your engine. It connects your crankshaft to the camshaft, and this controls when each intake and exhaust valve opens and closes. Without this critical component, your engine wouldn’t run, and you’d likely total your engine in a matter of minutes – if not seconds.

This is an extremely important component, even if you can’t see it. That’s because both timing belts and timing chains are covered, and you have to remove a ton of different components to reach them.

Moreover, when you’re replacing a timing belt or timing chain, it’s not only a labor-intensive process but a technical one as well. Because if you accidentally line up the new belt or chain to the wrong grooves, you’ll have a mistimed engine, and that can quickly lead to a lot of damage.

So, if you need to replace your vehicle’s timing belt or timing chain and don’t know what you’re doing, it’s best if you take your vehicle to a certified mechanic instead of trying to figure it out yourself. While it can be tempting to try and save a few bucks upfront, the long-term effects simply aren’t worth the risk.

But most manufacturers don’t recommend changing these guides for at least 150,000 miles, and sometimes it’s an even longer interval. The advantage of a timing chain is that once it’s in your vehicle, you’ll probably never need to change it, which saves you money in maintenance in the long run.

However, many manufacturers opt for timing belts instead of timing chains because they’re cheaper upfront. This allows them to save some money on manufacturing costs and make a little more profit without raising the vehicle’s cost.

Moreover, sometimes a timing chain is a little louder than a timing belt. But as vehicle technologies advance, manufactures have found ways to make timing chains just as quiet as timing belts. But if you’re looking at an older vehicle, this might be a concern.

You need to consider that many modern car models have problems with the timing chains, which can be very costly; proper research is needed for your specific car model before making a choice.

But if you ignore the replacement and the timing belt snaps, you can end up totaling your engine which can cost you thousands of dollars instead.

Furthermore, timing belts used to be far quieter than timing chains, but this isn’t the case anymore in newer vehicles.

Can You Switch a Timing Belt for a Timing Chain?

If you’re looking to upgrade your timing belt to a more durable timing chain that you don’t need to worry about, chances are you’re out of luck. That’s because there’s more to this swap than just changing a belt for a chain, and it’s not something you’re going to figure out for yourself.

However, if you’re lucky, there are a few timing chain conversion kits out there. You’ll have to check for your specific vehicle’s engine, but the chances are you’re out of luck.

Keep this in mind when you’re purchasing a vehicle because if you get a timing belt, that’s what you’re probably going to be stuck with it for the long haul.

Which is Better: Timing Belt vs. Timing Chain?

Conversely, if your vehicle has a timing belt, chances are you’ll end up replacing it two to three times over the vehicle’s lifespan.

This adds up, and if you replace the timing belt three times, the total cost can exceed $2,100! Moreover, since timing chains are now just as quiet as timing belts, there really is no reason to stick with a timing belt in a modern vehicle.

But no matter what choice you go with, make sure that you’re keeping up with all of your service intervals to keep your vehicle running the way it should.

Remember that many modern car models have problems with the timing chains, which can cause you to have to replace the timing chain. This is often more costly than a timing belt replacement. Therefore you need to check for the amount of timing chain failure reports of the specific engine model before buying your car.