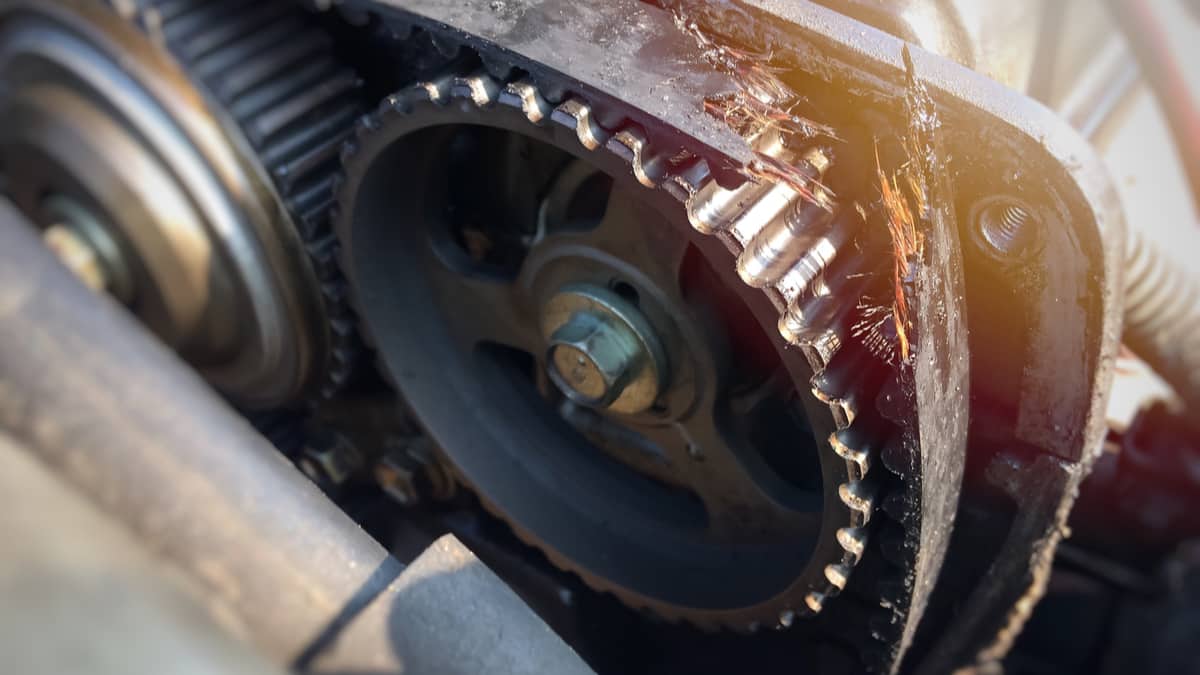 The timing matters, especially when it comes to your car engine. If the car motor doesn’t remain in sync, performance suffers and you run into trouble driving. That’s why it’s important to recognize the symptoms of a bad or failing timing belt before it leaves you stranded.

In this guide, we look closer at the top symptoms so you know when to replace the vital component. We also look at where the timing belt is found and analyze how often it should be replaced.

Symptoms Of A Bad Timing Belt

The most common symptoms of a bad or failing timing belt center on performance. The engine may misfire, or there could be a lack of power. Additionally, you might hear a ticking sound, see the Check Engine Light or have issues with the exhaust. In extreme cases, the engine won’t turn over at all.

As a maintenance task, you can avoid timing belt issues before problems get worse by looking at the most common symptoms. Here is a more detailed list of the signs of a bad or failing timing belt to look for:

Poor performance is a strong symptom of a failing timing belt. Because the timing belt is needed to keep everything running in sync, any issues can lead to performance trouble. If the engine misfires, you are looking at the timing of the valves being off, which can be created by a bad timing belt.

As the timing belt wears, it affects the rate that your engine is firing at. It can also slip on the camshaft, leading to the cylinders opening or closing before they should. Even if the engine isn’t misfiring yet, you might notice it just isn’t performing the way it once did. These early warning signs should be looked at before engine damage occurs.

Engine noises should never be ignored. If you notice a ticking sound coming from the engine bay, it could be a symptom of a worn timing belt.

A timing belt gets attached through pulleys that run the engine’s camshaft and crankshaft. While the crankshaft is responsible for powering the connecting rods, the camshaft is needed to operate the valves on the cylinder heads. Any interruption in this operation because of a defective timing belt can cause ticking.

Any time that the car motor has to work harder than it should, you could notice more exhaust smoke. This symptom indicates that the engine is facing duress, requiring your immediate attention.

Additionally, bad timing can also lead to air coming into the system at the wrong times or an imbalance in the fuel-air ratio. Either of these problems can also create more exhaust smoke.

Whenever there’s a malfunction with the engine or its vital components, the Check Engine Light will illuminate on your dashboard. If there’s an issue with the camshaft or crankshaft timing, a correlating code should set, causing you to receive an alert.

If you notice this check engine light together with any of the other symptoms, it could be a strong sign that something is wrong with the timing belt.

In extreme cases, the Check Engine Light could flash, indicating that you should stop driving the vehicle immediately. If you have an OBDII scanner, you can pull the codes to see what’s wrong with the engine. Otherwise, you will want to visit your local mechanic or auto parts store to have the codes read.

If the timing belt isn’t replaced before it breaks completely, the engine won’t turn over. If the engine doesn’t start after turning the key, it could be due to the timing belt. In this case, the starter motor should still attempt to engage, but no ignition will occur and this would be a strong sign of a broken timing belt. The belt is responsible for timing the crankshaft and camshaft, so ignition cannot occur without it.

In some cases, the timing belt breaks while you are driving. If this happens, additional damage can occur to the valves, rocker arms or push rods.

If your car suddenly dies while driving and won’t start afterward, it could be a symptom of a broken belt. Especially if it sounds like the starter is spinning faster than it usually does when starting the vehicle.

Your car’s timing belt is found inside the timing cover. The belt is located near the front of the engine and is constructed from rubber. If you notice a heavy-duty metal construction instead, your car uses a timing chain.

The timing belt is an essential component for normal engine operation. The car engine cannot run properly without a reliable timing belt.

The car’s timing belt is linked to both the crankshaft and camshaft. The crankshaft is needed to regulate the positioning of the engine’s pistons while the camshaft opens and closes the motor’s valves.

It could also be needed to operate several other moving components on the engine, such as the oil pump and water pump. The rubber belt contains hard teeth needed to interlock with cogwheels on the various engine parts.

How Often Should the Timing Belt Be Replaced?

Replacing the timing belt is considered part of normal maintenance. You can find the exact interval in your owner’s manual. However, most manufacturers recommend replacing it every 75,000 to 100,000 miles or if issues arise before that. The timing chain design can last longer because it is heavy-duty, sometimes as long as up to 120,000 miles.

You should never put off replacing the timing belt. If it breaks because of a lack of maintenance, you could need an engine replacement or rebuild, which is much more costly.

The timing belt replacement cost averages between $250 and $1000 total. The belt and related parts should only cost you $30 to $500, but labor can add much more to the bill. In fact, the labor to replace a timing belt could easily cost you $225 to $500 because of how much time is required to complete the job.

During the timing belt replacement, you may also put a new water pump on because of the location. This job might add another $550 to the total bill, with about $200 to $300 for the part and another $250 to $300 for the labor. However, by pairing these two jobs together, you should be charged less for the labor as many of the same parts are removed for each replacement.

The cost to replace a timing belt depends heavily on the type of vehicle you drive. If you have a compact car, you will have a lower cost than most of the vehicles containing a V6 engine. The smaller the engine is, the less labor is needed to disassemble parts. Additionally, luxury cars and imports can have more expensive parts or require a special mechanic to perform the replacement.

Unless you have a lot of mechanical knowledge, it’s not recommended to complete this replacement on your own. If you don’t put the timing belt on correctly, it can lead to engine damage down the road. If you notice any of these symptoms above, you definitely want to take a look at your timing belt, before it’s too late!

Can you drive with a broken timing belt?

No, if the timing belt breaks while you are driving, it can cause catastrophic engine damage. The timing belt is responsible for keeping the engine’s valves in sync with the pistons and if it breaks, the valves will no longer be in sync with the pistons and will start to collide with them. This will bend or break the valves and cause serious damage to your engine. In some cases, a broken timing belt can even completely destroy an engine.

Is there any warning before the timing belt breaks?

No. The timing belt will most likely break without warning and damage your engine. Sometimes when there is something wrong with the camshaft timing due to a bad timing belt, it will show a check engine light on your dashboard, but in most cases it will just snap and seize the engine. If you suspect that your timing belt is bad, replace it.

There is no fixed mileage or age on how long a timing belt will last, it depends on the make, model and manufacturer of the timing belt. Some timing belts need to be replaced after 40,000 miles while others last up to 150,000 miles. Check your car’s service manual for the schedule for when to replace the timing belt, and don’t drive over these miles or ages.

What happens if your timing belt breaks?

If your timing belt breaks, you will likely experience engine failure. The timing belt is responsible for ensuring that the engine’s valves open and close at the correct time. When the timing belt snaps, the valves can collide with the pistons, causing extensive damage to the engine. In many cases, a broken timing belt will cause the engine to seize up completely.

The main symptoms of a bad or failing timing belt include: