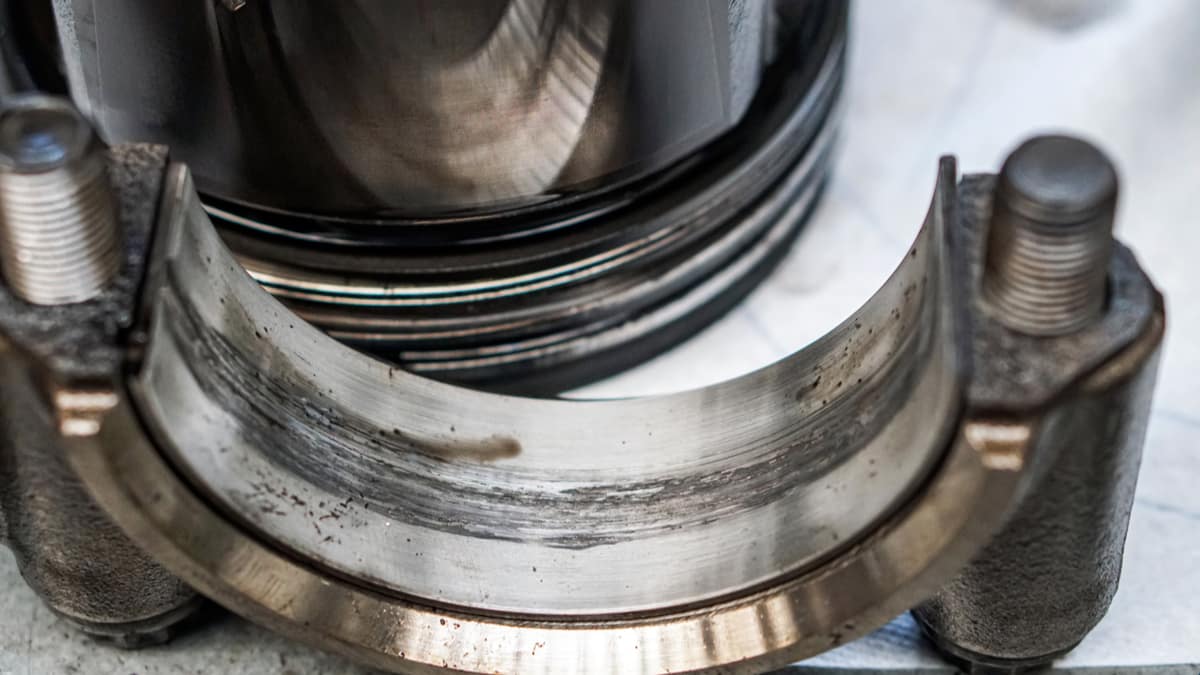 As your car idles, you might start to hear a frightening engine noise known as rod knock. It often comes across as a loud banging sound that is enough to make your heart stop as you contemplate expensive engine repairs. However, not all engine knocks are rod knocks.

So, what is rod knock, what causes it and how can you discern the symptoms of this engine problem?

What is Rod Knock?

Rod knock is a deep rapping sound that comes from within the engine. It is caused by rod-bearing wear or damage. The vehicle’s connecting rod bearings have excessive clearance, causing additional movement. As the piston changes direction, the metal starts hitting metal, which produces the knocking noise.

This noise will increase as the load and speed go up.

Here is a video of how it sounds:

The most common cause of rod knock is worn connection rod bearings. Rod knock is only caused by one thing, but several other causes can lead to symptoms that are similar to rod knock.

Here are some of the causes that could cause rod knock or have similar symptoms as rod knock:

The only cause of the rod knock is worn bearings. As the pistons move up and down in your car engine, they rotate the crankshaft, which is responsible for sending power to the wheels. The bearings are responsible for ensuring that the piston movement remains smooth and controlled.

However, these bearings wear out over time and can come out of their position. When the bearings are worn, the piston rods begin rattling against the crankshaft, creating a unique knocking sound.

The only way to repair this is to replace the bearings, which are deep within the engine.

A detonation knock can sound similar to a rod knock. If the engine runs as it should, the air and fuel mixture is burning in a single detonation within each cylinder. However, the detonation knock occurs when that mixture detonates in more than one place at a time, leading to a knocking noise.

One such cause of this knock is octane that is too low for the engine. If you have a performance engine, you need a higher octane rating than most cars. High octane burns uniformly, thereby preventing that knock.

This problem is an easy fix, just requiring you to use a higher octane fuel the next time you fill the car.

Another reason for the detonation knock is bad engine timing. The timing refers to the point when the spark plugs fire. This timing is controlled by the computer.

When the timing is off, the spark won’t fire when it should, leading to multiple detonations within the cylinders. That’s what causes the detonation knock. To resolve this, the timing must be fixed.

Another reason for detonation knock is having a lean air/fuel mixture. This problem can be caused by defective oxygen sensors, failing fuel injectors, a bad fuel pump or malfunctioning mass airflow sensor.

The lean mixture occurs when there isn’t enough fuel and too much air. Without the right amount of fuel, the mixture can’t burn fast enough, which causes multiple detonations.

Another reason for detonation knock is a malfunctioning knock sensor. Thankfully, this doesn’t occur too often on newer cars because the air/fuel ratio, timing and fuel injectors are controlled by the computer.

The knock sensor detects any situation leading to the noise and alerts the ECU, where corrective action can be taken right away. So, if the car has a bad knock sensor, the computer won’t know to correct issues and might allow the engine to knock.

The final reason that might you hear an engine knock is because of something that isn’t coming from the engine at all. When the accessory belt doesn’t have the right amount of tension, it can create a similar noise.

As the engine rotates, the belt turns. It’s connected to numerous pulleys in the engine bay and must be pulled just right to work quietly and smoothly. If the belt gets loose, it means the tensioner isn’t working right. However, you can also have problems if one of the pulleys gets bent.

This condition leads to rattling, slapping and clicking noises that could be mistaken as an engine knock. To fix this, you simply need to replace the belt, tensioner or pulley.

What Are The Symptoms of Rod Knock?

The main symptoms of rod knock include:

If the vehicle truly has a worn-out rod bearing and it isn’t knocking because of one of the other reasons, there will be two common symptoms. Here is more detailed information about these two signs of rod knock:

Obviously, the main symptom of a rod knock is a knocking sound. You will likely hear this loud banging when you first start the car.

It will also increase as you up the load on your vehicle or push the accelerator down.

When a bearing has failed or starts to fail, you might notice lower oil pressure than normal. It’s most evident when the vehicle first starts up.

The Check Engine Oil light might even come on your dash, letting you know about the pressure. If the light goes out and pressure returns to normal after a few minutes, this is a strong indication that a bearing has gone bad.

The rod knock repair cost will be $2,500 or higher. On a few vehicles, such as a Subaru Forester, the connecting rod repair can easily be $5,000 or more with parts and labor.

Connecting rod bearing replacement is not an easy task. First, the defective part is located deep within the engine. You will need the connecting rod bearings, but also cylinder head bolts, new engine gaskets and seals. Plus, the engine and cooler lines all need to be flushed. In some situations, you will also need new connecting rods, pistons, timing chains, crankshaft and camshaft bearings. With all these extra parts involved, it might be better to consider an engine replacement instead.