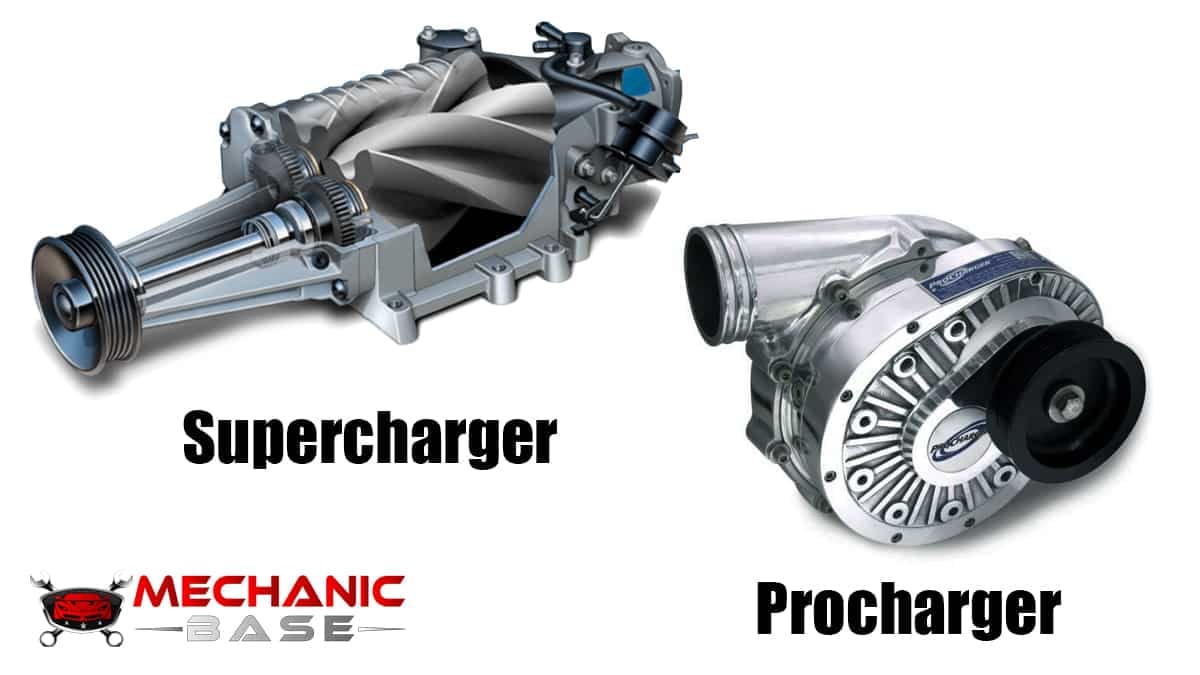 If you are looking to add more power to your vehicle, you might be wondering what the difference is between the procharger vs. supercharger. Both of these have certain benefits and a few downsides to consider before moving on. So what’s the difference between a supercharger and a procharger?

The supercharger uses mesh lobes to push air back and forth to create more pressure within the intake manifold. On the other hand, the procharger is a centrifugal supercharger that provides a steady stream of air, but this type is going to cost you more money.

In this guide, we cover the top differences between the supercharger and procharger. We show you the pros and cons of both, plus discuss which one might be better for you.

What is a Procharger?

With this centrifugal supercharger, a rotating impeller draws the air in and directs it back out, moving in a circular formation. This air converts to high pressure, where it gets driven from the procharger right into the engine, providing a consistent amount of force. With the constant flow of air, there’s no lag or waiting around for power.

Plus, the procharger gets attached right to the engine. It’s compact, so there’s no need for additional modifications with most cars. The procharger also won’t produce an excessive amount of power, unlike the supercharger. Still, this unique design does add to the price. On top of that, the procharger can be much louder than your typical supercharger, even creating a whining sound when the engine revs. Some people aren’t fond of this sound that’s created.

What is a Supercharger?

Superchargers provide a lower-cost way to get power out of the engine. If you are shopping for a supercharger, there are different types, each with its own set of pros and cons. With a few of the superchargers, you might need to make modifications to the hood, so that’s something to be aware of.

The most common and basic choice is to get a roots supercharger. It sits perfectly under the hood of many cars and gets connected to the intake manifold. Air is pushed back and forth between the mesh lobes to build up pressure within the intake manifold. This action provides short bursts of air into the engine, giving it surges of power.

Otherwise, you could choose a twin-screw supercharger. This design relies on long screw-type parts that spin and draws air in to store up the pressure. These are smaller than the roots supercharger, so there isn’t as much room needed. Yet, this type is louder, often requiring some type of sound suppression, which further adds to the cost.

While the supercharger is going to give you plenty of quick power, it doesn’t come in continuous bursts. This is probably the biggest complaint. While the lag isn’t as noticeable as with a turbocharger, there will be some that you might deal with.

How to Choose Procharger vs. Supercharger

Whether you are using a supercharger or procharger, you are clearly looking to add some more power to your engine. So, which one would suit you better? Both of them are going to provide some gains but in a different way. That’s why it’s crucial to understand your performance goals before you move on.

With a supercharger, you might be able to get more power out of the engine than with a procharger. However, the power will come in bursts, so it’s not continual. The amount of lag is barely noticeable to some people and far less than what’s found with a turbocharger, which is why these cost more than a standard turbo.

The procharger is known for providing a smoother stream of power, but not usually as much as the supercharger. While you aren’t going to wait at all, you might not get everything you want out of a procharger, especially if you are looking for maximum gains. Still, most prochargers won’t require big modifications to the car, while the supercharger might. This is something else to consider when deciding what’s important.

The supercharger causes some stress on the car engine. For this reason, you must monitor oil levels more carefully than you would with the standard engine. You may also need to upgrade the fuel quality that you use.

If you upgrade to premium fuel, you will help the engine last longer. However, not all vehicles should use premium fuel, so this is something to research carefully before you make changes.

Additionally, you want to keep a close eye on the automatic transmission. With regular maintenance and care, you should be able to counteract any additional stress caused by the supercharger.

On top of that, both the supercharger and procharger will contain a drive belt. This needs routine maintenance to ensure proper operation. Most drive belts should be changed every 50,000 to 70,000 miles.

There’s a lot of excitement in adding power to your car, but it comes at a cost. In return, the car’s value will go up, but not enough to justify what you spend. If you are working on a tight budget, you need to be careful which option you choose. Obviously, the turbocharger is the cheapest solution in most cases, but we are strictly looking at the supercharger vs. procharger.

On the low end of the spectrum, you might find something for $2,500 or less, but you want to be careful about the quality. The price is heavily related to how much power you are going to get and the amount of durability. That’s why with either a supercharger or procharger is going to provide you with what you pay for.

If you are looking for a long-lasting and reliable amount of power with either one, aim to spend a little more than the basic option. With a classic roots supercharger, you might be able to get a good enough unit for $2,500 to $3,000.

With the supercharger though, you don’t want to buy something if you can’t take it to the extreme. In some regions, it’s illegal to use a supercharger to its tuned extreme. If this is the case, you will do better investing a little more in a procharger. Otherwise, you could be spending more on fines and traffic tickets that the cops give out to you.

While the procharger is going to cost you more upfront, there are some economic benefits that add up over time. For example, the procharger doesn’t burn through as much fuel as most superchargers. If you are worried about fuel economy, this would be more cost-effective. The procharger also puts less stress on the engine. While you will still need to pay attention to the regular maintenance, you might not have as many problems as you could with the supercharger.

It’s a delicate balancing act. You can pay less for a supercharger up front, but it could cost you over time. On the other hand, if you can invest more upfront, you will save down the road with a procharger. If saving up a little longer will get you a better unit, go ahead and put off the purchase for a short time.