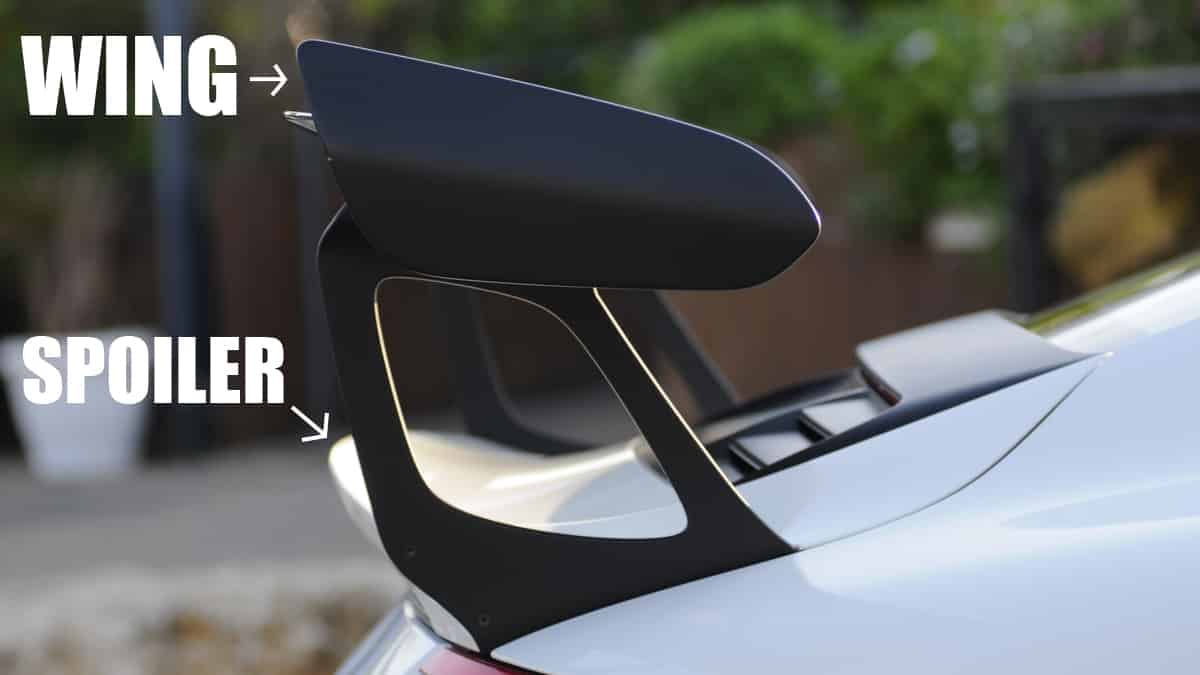 The terms spoilers and wings are often used interchangeably, but the two are quite different. That’s why it’s important to understand the comparison of the spoiler vs. wing, especially if you are trying to figure out what’s best for your vehicle.

In this article, we examine what a wing and spoiler are, plus how they are different from one another. We also explain the different types of each, so you can find the one that best works for your vehicle. At the end of our guide, we discuss the average price for both the wing and the car spoiler.

What’s the Difference: Spoiler vs. Wing?

While the spoiler and wing look similar to one another, the way the airflow is redirected varies. The wing deflects the airflow in an upward motion that generates downforce. On the other end, the car spoiler is used as a barrier to disrupt airflow, thereby creating downforce.

A wing resembles an airplane wing that’s been inverted. There will be a space between the wing and the vehicle while the spoiler is attached directly to the vehicle, either on the rear window, roof or trunk.

What is a Car Spoiler?

Spoilers were created for sports cars, rally cars and race cars but will be found on regular passenger cars today. Air flows naturally over the roof to the rear of the vehicle.

When this airflow is unobstructed, it will create low pressure and flow quickly. However, when a spoiler is installed, the airflow becomes disrupted. Therefore, there’s less lift and airspeed, along with a reduction in drag.

The front spoiler is also known as an air dam. It’s constructed from lightweight plastic or metal and placed below the front bumper.

The air dam ensures there’s airflow moving toward the radiator. It keeps airflow from getting under the car chassis to reduce fuel consumption and drag.

The roof spoiler is going to be found on the back of the car. It’s placed between the rear window and roofline.

These spoilers range in size. However, some of them are also going to include an additional brake light.

The pedestal spoiler is meant for the trunk of the car. It can also be made from a variety of materials and is lightweight.

With the pedestal spoiler, the airflow is disrupted to create downward force. The end result is better performance and enhanced fuel economy numbers.

You can place a lip spoiler on the back or front of your car. If you put one on the front, it’s going to make the car bumper appear longer, so the ride height seems to be lowered.

The rear lip spoiler gets put below the lip of the trunk. These don’t serve any performance benefit but do have a nice look to them.

Spoilers aren’t just for cars but also look great on trucks. With the right spoiler, the truck can have a more aggressive appearance.

As with the standard roof spoilers, many of the pickup spoilers also come with brake lights. You can also choose from a variety of sizes based on what your goals are.

Spoilers can have more than one purpose. With the right lighting in place, the spoiler can also increase visibility.

Spoilers can be equipped with any number of lights. These don’t change the performance aspects of the operation but add more safety to the aftermarket equipment.

What is a Car Wing?

The wing is always placed on the rear of the vehicle. It allows the air to flow over and under the component to generate additional negative lift.

The wing will capture any air coming from the roof. Then, the air gets redirected upward, thereby pushing the back of the car down. This design is helpful with a race car, as it allows the wheels to remain planted on the street.

Because of this design, the whale tail is also known as a tea tray. Overall, this type of wing is primarily used for its look and it doesn’t serve a lot of purposes.

The gurney flap is also known as the wickerbill. It has a small tab that comes from the wing’s edge. While this type does look good, it’s not meant just for aesthetics.

What is Better for Your Vehicle: Wings vs. Spoilers?

Wings and spoilers aren’t meant for every vehicle. For that reason, it’s important that we first take a moment to look at the disadvantages of these aftermarket parts. It can be difficult to find a spoiler or wing that matches the aesthetic of your car. Certain paint colors are tough to match, especially if it’s an older model. While you might think that this accessory will upgrade the style, it can quickly turn it into an eyesore if it’s not done correctly.

Additionally, the spoiler or wing is made from lightweight materials. Whether ABS plastic is used or fiberglass makes up the construction, it’s simple to harm this part. They can also be difficult to install. If you don’t have the expertise or tools to get the job done, it’s always best to pay for a professional to handle the installation.

With that in mind, you can determine which one fits your needs the best once you acknowledge that these downsides aren’t something for you to worry about. With either option, the aerodynamics of your vehicle isn’t going to be dramatically improved unless you are regularly traveling at high speeds.

That’s why these accessories are best used for race cars. On the other hand, your standard commuter isn’t going to get a dramatic boost, so the only real reason to use it is to give your vehicle a sportier look. Because it’s mainly done for aesthetic purposes, you want to choose the one that looks best with your vehicle.

Both the car spoiler and wing are going to have relative costs. On average, you can expect to spend anywhere from $25 to $250 for the spoiler or wing. Of course, if you are looking for something more performance-focused, the price could go up much higher. The overall price depends on your car type, the paint color and the materials you choose.

If you can install the spoiler or wing yourself, you won’t need to spend more on labor. Even if you need to buy a few supplies to get the job done, it might be worth the savings. However, if you don’t know what you are doing, you might spend an hour or two on labor costs. This investment is well-spent when you could damage the car doing it yourself. Paying for any damage caused will cost more than having a professional help you out in the beginning. It’s not worth the risk.