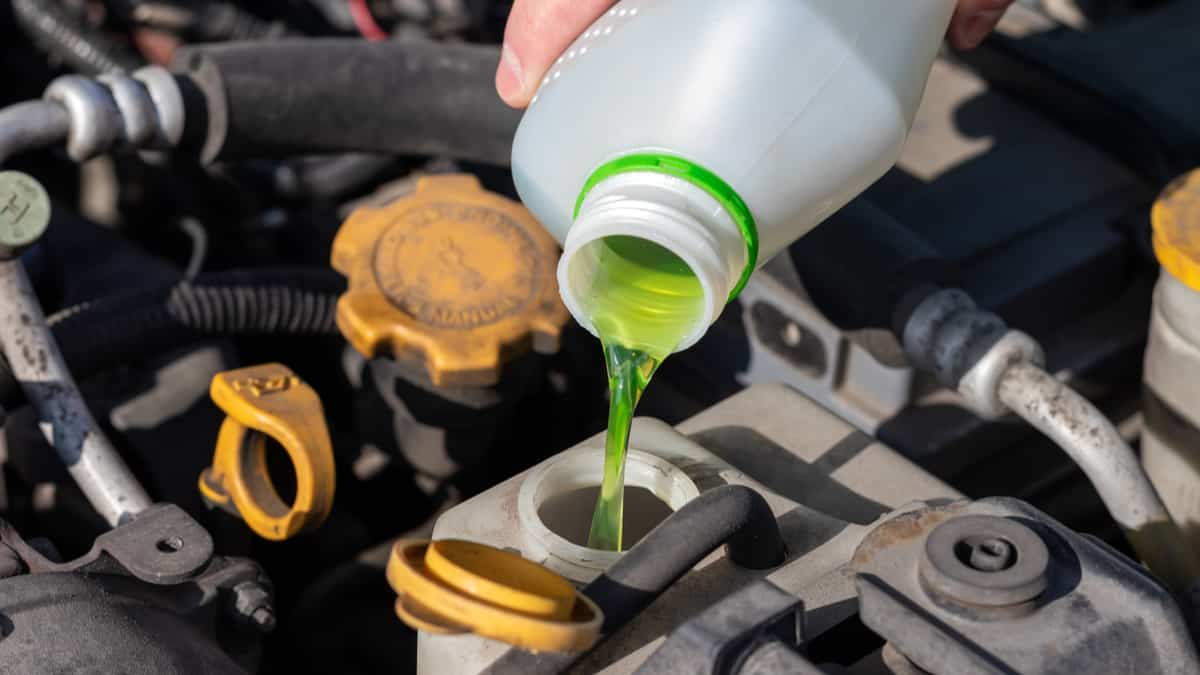 Engine coolant comes in several different formats, including green and orange. Can these types be used interchangeably, or is there a difference between green and orange coolant?

Both are meant to keep the engine from overheating and freezing, but there are some distinct differences. Older vehicles are built with more metal components, while a new car comes with nylon and aluminum pieces. To better protect the system, green coolant is used on the older vehicles, while orange is used for newer models.

In this article, we look at how each coolant type works. We also discuss whether you should mix the two coolants together.

Table Of Contents show
What is Coolant?
Differences Between Green & Orange Coolant
1. Green Coolant
2. Orange Coolant
Is it Okay to Mix Coolant Types?
How Often Should Coolant Be Flushed?

Coolant is antifreeze that has been mixed with water to protect the vehicle. Coolant keeps the engine at a safe operating temperature while also ensuring that it doesn’t freeze.

To make most coolants, you mix the antifreeze mixture with equal parts of water. While water will cool the engine by itself, it isn’t as effective. In fact, water can evaporate when the engine becomes too hot and it can freeze in colder climates. Both of these conditions leave your engine vulnerable to damage.

The color of the coolant is from the dyes used to make it. Manufacturers add a particular dye to the composition to ensure you know which one to use. Two of the most known coolant colors are green and orange.

The main difference between green and orange antifreeze is the ingredients. Green coolant uses inorganic additive technology while orange uses organic acid technology. Orange is better suited for newer cars with an aluminum block, while green is better for older cars.

Here are some more details of the differences between these coolants:

This engine coolant was made specifically for older vehicles, dating before 2000. Green coolant is used in systems designed with copper and steel. The green composition protects the metallic parts from corrosion and rust.

Within the composition, Inorganic Additive Technology (IAT) is added into the mixture. IAT contains several compounds, such as silicone and phosphate mixed with ethylene glycol and propylene glycol.

The phosphates come from phosphoric acid and are used to remove grease and oil, along with softening water. Silicones are used as the metal sealant, keeping the materials from damage caused by wear, chemicals and moisture. Ethylene or propylene glycol is used to keep engine temperatures at bay.

Orange antifreeze also helps to protect against corrosion and wear, but it’s not meant for vehicles made with a lot of metal. Instead, it is used on newer models that are made from nylon and aluminum.

Inside the orange coolant are carboxylates, which work to reduce corrosion. However, these substances don’t hurt the non-metallic parts, like the green coolant can.

Systems started to be built with less steel copper in the 1990s. That’s when GM released DexCool, which mixes Organic Acid Technologies (OAT) to reduce the instance of rust. However, orange coolant does allow oxygen into the system when it gets too low. This fault leads to damage of the internal components and clogs. That’s why it’s important to keep the system filled up at all times.

Is it Okay to Mix Coolant Types?

You should never mix orange and green coolant together. When the two combine, a chemical reaction occurs, leading to thickening that shouldn’t take place. What you are left with is a gel substance that doesn’t operate the same way liquid does.

This gel won’t be able to cycle through the system properly, leading to a multitude of problems.

When the system can’t be cooled properly, it will overheat, leading to catastrophic failure. As one example, consider the cost of replacing the water pump in your vehicle. On average, you can spend $450 to $700 having the water pump replaced, with parts costing $250 to $300 and the labor adding another $200 to $400.

RELATED: Can you Mix Different Types of Coolant? (Which Types?)

How Often Should Coolant Be Flushed?

It’s important to keep the cooling system running its best to ensure a long engine life. Topping off the coolant when levels get low is one step to maintaining the system. However, there are times when a coolant flush is necessary.

There is no set timeframe designated for a coolant flush across the board. However, you will find the recommended interval for your vehicle in the owner’s manual. Additionally, the dealership can give you a printout of the maintenance schedule, including the best time for coolant flush service. Newer coolant formulas are made to last longer, allowing them to work up to 100,000 miles or five years, whichever is first.

You might also prefer to test the integrity of the coolant with a set of test strips from your local auto parts store. By simply dipping one into the coolant reservoir, you can determine if the pH has risen too higher, thereby requiring a flush.

During a coolant flush, all of the old fluid is removed and a cleaner is put into the system to remove any dangerous contaminants. Once this cleaner is flushed out, new fluid is added, with a ratio of 50/50 water and antifreeze.