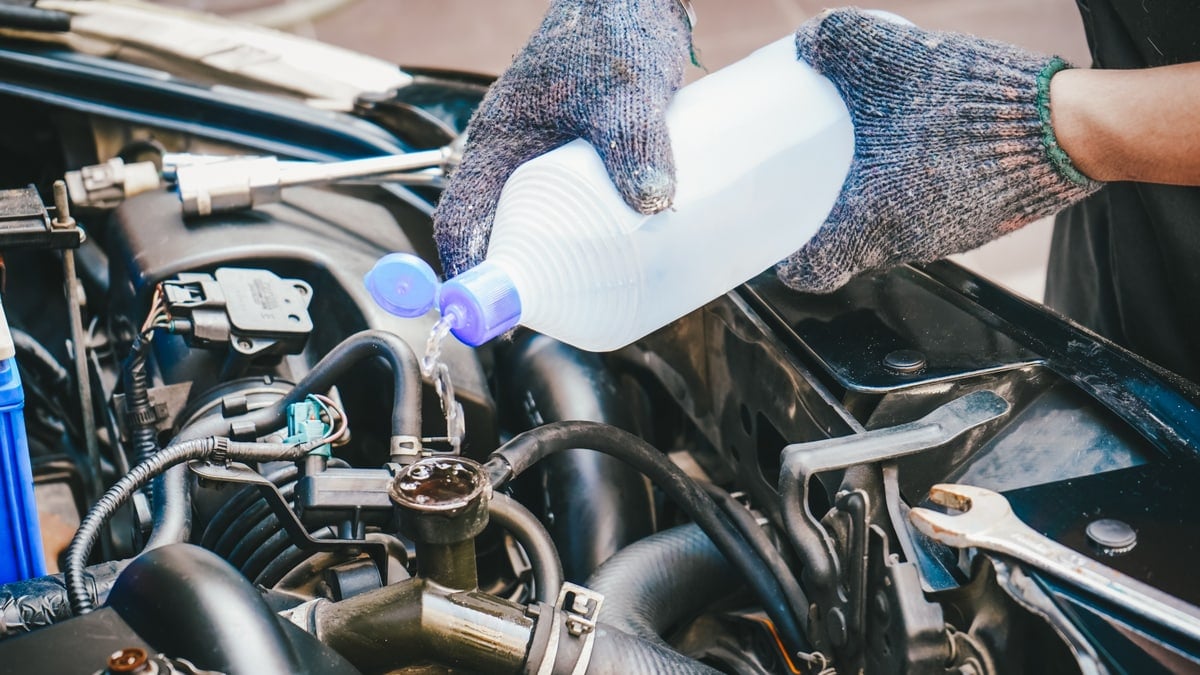 Have you ever put water into the coolant tank of your vehicle instead of using antifreeze? You wouldn’t be the first person to do so. Many people believe it is okay to add distilled water instead of coolant, especially if you live in a hot climate. After all, why do you need a fluid to stop freezing if it never gets below 32-degrees Fahrenheit? So, is it safe to use water instead of coolant?

Sure, water is cheaper and might prevent overheating, but this isn’t all that coolant is good for. It’s needed for proper cooling system function. Let’s take a closer look.

Table Of Contents show
Can You Use Water Instead of Coolant?
Coolant vs. Water Differences
1. Boiling Point
2. Freezing Point
3. Corrosion Protection
What is Coolant/Antifreeze?
How Does Coolant Work?
Why is Coolant Important?
Right Way to Add Coolant

Can You Use Water Instead of Coolant?

You can use water instead of coolant in emergency situations when you only have access to water. It is recommended to fill the system with the correct coolant mix immediately after repairing the leak. However, never drive with only water in the long run.

It is definitely not recommended to use only water for long-term use, even if you live in a warm climate. It can cause internal rust, overheating, and other issues with your engine if you only use water.

Few people think about the boiling point differences between water and coolant. However, it’s clear that the operating temperature of your vehicle is going to be hotter than the boiling point of water (212°F).

When you mix ethylene glycol antifreeze in a 50/50 ratio, the boiling point rises to 223°F. That figure is much closer to the engine’s operating temperature. Using waterless coolant changes the boiling point to 375°F or more.

Without antifreeze, the vehicle’s engine is going to overheat. The liquid inside will boil over and evaporate, forcing you to stop your vehicle so the motor can cool off. You can also cause serious damage to the engine by letting it overheat.

The opposite can be said if you live in a cooler climate. Without antifreeze in the cooling system, it will freeze.

When your radiator freezes, you have big problems on your hands. In fact, the radiator could crack, rendering your cooling system useless.

Over time, the minerals in water are going to create deposits in the radiator that can cause it to stop working correctly. Water is also corrosive to metal, so rust is going to form faster. Both of these conditions are dangerous to your car engine, which is why coolant has special additives to stop rust formation.

When you mix antifreeze, you should always use distilled water because there are no impurities in it. With the right mixture, the metal components are properly protected, ensuring a long life.

The terms coolant and antifreeze tend to be used interchangeably even though they are slightly different. Antifreeze is made from ethylene glycol or propylene glycol, ensuring that the coolant remains in liquid form for maximum protection.

Antifreeze is mixed with distilled water in a 50/50 ratio, making it coolant. Antifreeze is available in a variety of colors, either green, pink, yellow, red, blue or orange. These colors make it easier to identify the right type of antifreeze for your vehicle.

How Does Coolant Work?

As you drive your vehicle, the engine is creating a lot of heat and needs to be continuously cooled to work right. If the engine weren’t cooled down, it would lead to complete motor failure.

The cooling system directs coolant flow into the passages of the engine block, as well as the cylinder heads. While the coolant passes through the engine, it absorbs the heat.

Heated fluid moves from the engine to the radiator. As it goes through the radiator’s thin tubes, it gets cooled off because of the air coming through the front of the vehicle. There’s also a fan blowing on the radiator to cool it off.

Cooled fluid moves back out of the radiator to the engine once again. This circulation of coolant is what runs the cooling system.

Why is Coolant Important?

When the heat created by an internal combustion engine builds up, it can cause numerous problems that are expensive to repair. Not only can the head gasket blow, but the cylinder head can warp and severe engine damage follows.

By using water in the motor, the liquid evaporates and boils away, leaving the vehicle without fluid. On the other hand, in cold climates, there’s a higher risk that the water will freeze, which leads to cracks in the radiator, a cracked engine block or failure of the heater core.

Each automaker has a different configuration to the cooling system, requiring a particular coolant for complete protection. You don’t want to use antifreeze other than the one that is recommended, or you could do more harm than good.

Before you get started, you want to check the coolant levels. Don’t open the radiator cap while the engine is hot because pressure has built up inside, leading to spraying hot liquid when the cap is removed.

Once the engine is cool, open the coolant reservoir cap. You can look inside or check the level by reading the markings on the side of the tank.

If more coolant is needed, mix the antifreeze according to the directions, using distilled water. If you purchase a premixed coolant, you can skip this step.

Put the cap back on and start the engine. You should also inspect the radiator and hoses for leaks at this time. Taking care of your cooling system with the right fluid ensures your engine runs as it should.