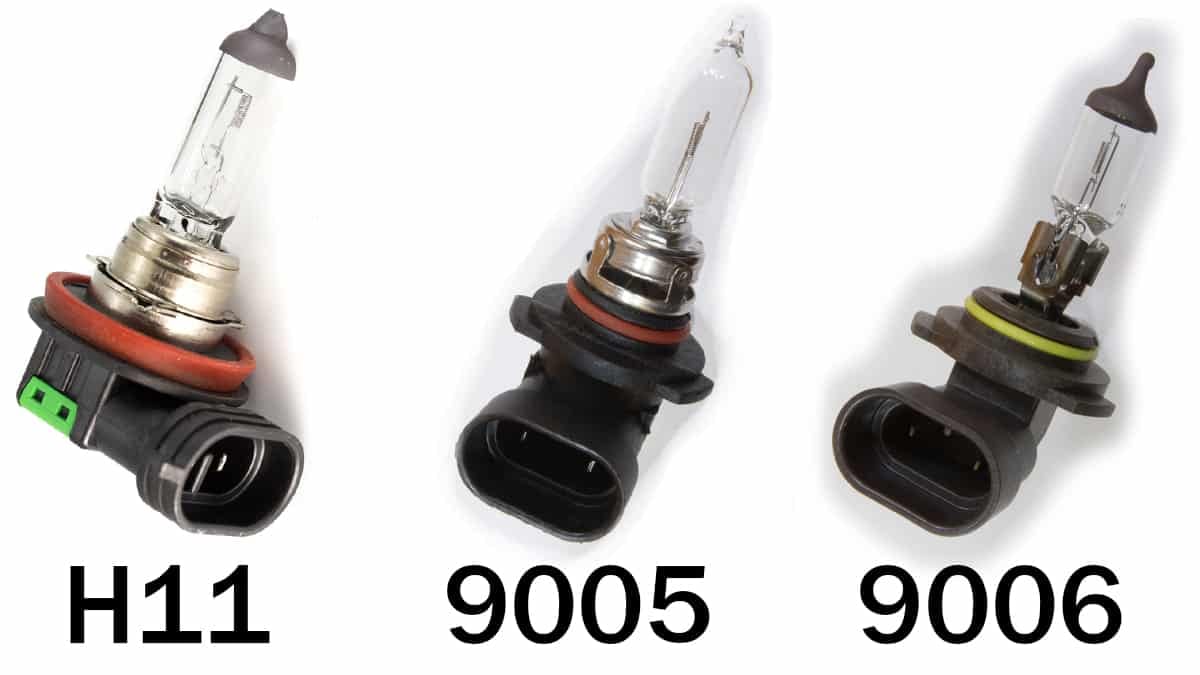 When the time comes to change the bulbs in your headlights, you need to understand the different types available. Many people wonder about the key differences between the 9005 vs. 9006 vs. H11 bulbs. Are these the same and can they be used interchangeably?

There are stark differences between the connectors, socket compatibility, and beam type of the 9005, 9006, and H11 bulbs. Additionally, there could be differences in the wattage, lumens, and lifespan, depending on which brand you buy. The 9006 and H11 are low-beam bulbs, while the 9005 is a high-beam bulb.

In this article, we examine each of the bulbs in-depth, showing you the benefits and disadvantages of each. We also cover which bulbs can be used interchangeably in your vehicle.

The car headlight typically contains two types of beams, either the low or high. The 9005 bulbs are designed to be used as high-beam bulbs.

On the other hand, both the 9006 and H11 bulbs are designed for low-beam headlights. However, some cars use a double-filament bulb that handles both the low and high beams.

Both the 9006 and 9005 bulbs contain a single filament, but the wattage can vary. H11 bulbs have a nominal filament. Ideally, you want to choose a bulb that produces plenty of light, but this also means more wattage.

Each bulb type will offer its own lumen rating. This number shows the level of performance coming from the bulbs. You might see options that produce 1000 lumens, 1200 lumens and more. The higher the rating is, the more light you can expect to come from the bulb.

On average, LED headlights will typically be rated at 2,000 to 4,000 lumens. It’s important that you don’t purchase headlights that are too bright. If it is rated at something abnormal, such as 10,000 or higher, you might be getting ripped off.

It’s important that your bulb lasts as long as possible otherwise you are simply throwing away money. The bulb type itself doesn’t affect the lifespan, so you will have to judge by the manufacturer.

Halogen bulbs have the shortest lifespan overall. Although, some are rated higher than typical. With LED bulbs, you can find the longest service life. It’s possible to get bulbs rated for 30,000 hours or more.

If you are planning on swapping out your bulbs, it’s important to know what connectors you are dealing with. Many people assume that the 9005 and 9006 bulbs are the same because they look so similar, but there’s an extra connector on the 9005 bulb compared with the 9006. However, you can use a 9005 bulb with the 9006 connectors with some modifications.

The H11 and 9005 bulbs have completely different connectors. However, it is possible to use a 9005 bulb attached to an H11 connector.

Additionally, the H11 and 9006 bulbs are different, but they do look more similar to one another. Just like with the 9005 bulbs, you can use the 9006 bulbs with an H11 connector.

There’s also a difference in the compatibility of the sockets. You can’t use a bulb in a socket where it doesn’t belong. The 9006 has a larger socket base than the 9005. While you can modify the base for a 9006 socket to hold a 9005 bulb, you cannot do it the other way around.

The 9005 bulb is a high-beam light. The LED type can light up a massive amount of area and provide a superior illumination. Sometimes, the 9005 light bulb is also used for fog lamps.

In general, the 9005 bulb is used on the highway and the LED type can offer a long lifespan. It’s also quite directional, ensuring that the light beam goes right where you need it. However, this additional intensity can provide much more power than the other bulbs. You also have to be careful not to use it when there’s oncoming traffic because the beam can be blinding.

The 9006 should have lower wattage than the 9005 uses and the longevity is dependent on the model light you purchase. However, there are a lot of options out there because the 9006 bulb is very popular. You can get long-lasting LED bulbs to fit almost any make and model. You can also purchase a bulb that has a low heat output for a more efficient operation. However, the 9006 cannot be used as a fog lamp light; it’s only meant for low beams.

The H11 bulb contains an L-shaped design, so it’s much different from the 9005 and 9006 bulbs. Its primary purpose is to serve as a low beam headlight. However, it can also be used as a fog light in some applications.

Halogen vs. Xenon vs. LED

The halogen light bulb is the most popular of all three. It’s been used as the standard for decades because of the low cost. The filament inside is made from tungsten and halogen gas. Because of the design, these lights can get hotter.

Xenon HID headlights create a whiter beam than the halogen bulb. Inside the bulb, there are electrodes that charge the gas to create a light. These typically have a longer lifespan than halogen bulbs.

LED bulbs continue to grow in popularity. Of all the bulbs, these can produce the whitest beam. Because there is no filament in the bulb, it can last much longer than the other types. There are some rated for 50,000 hours of service life.

The cost to replace headlights is typically between $10 and $150, depending on the type of bulb and your vehicle type. If you can replace the bulb on your own, you can save money on the labor charges. However, there are some vehicles that are harder to work on than others.