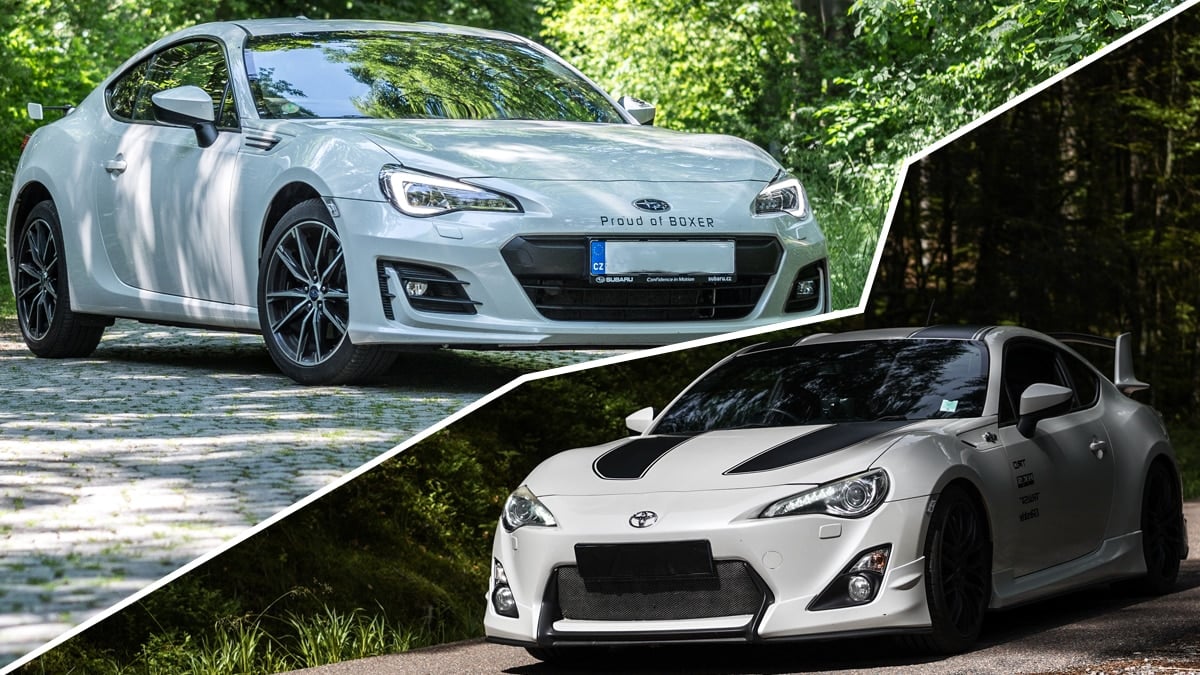 If you haven’t noticed it before, the Toyota 86, Subaru BRZ & Scion FR-S look almost the same.

The truth is that these cars are actually the same car from the beginning with a few design changes. So which car is the best of these cars to buy?

What’s The Difference Between Toyota 86 and Subaru BRZ?

The most significant difference between the Toyota 86 and the Subaru BRZ is the exterior look. Toyota 86 got a sportier look, while the Subaru BRZ has got a bland front end. There are also some differences in the performance of the suspension.

Here is a more detailed list of the differences between the Toyota 86 vs. Subaru BRZ:

If you are looking to buy a used Subaru BRZ or 86, there is no big difference between them in most locations worldwide. The BRZ can sometimes be a little bit cheaper, depending on where in the world you live, though.

Take one look at both of these cars, and you will see that everything else is visually the same except for the front fascia. The Toyota 86 has a sportier look with a honeycomb-style grille, angular fog lights, and prominent daylight LEDs. The Subaru BRZ has a bland front-end with a U-shaped grille and a black lip to hold the registration plate.

The side indicators are also differently placed in each car; however, the central idea is the same.

The interior inside both vehicles is filled with all the modern amenities. Both Subaru and Toyota have leather and other soft materials in their cars’ interior, replacing plastic in most places. In terms of space, the 86 and the BRZ are perfectly aligned; in that, they have ample front-row space while the rear passenger seats are cramped together.

You would enjoy driving them if you are the driver or sitting in the front seat as the passenger. If you intend to seat yourself in the rear, then there is bad news if you are a tall person.

The BRZ goes one step ahead of the 86 in terms of luxury as it offers luxurious seats with Alcantara inserts. The Toyota 86 has fabric on its seats. The dashboard in both these vehicles is filled with the latest technologies. You will get satellite radio, Bluetooth connectivity for music and calls, a rearview parking camera, and a comprehensive 8-speaker audio system.

Navigation can also be accessed through the LCD screen found on both the BRZ and the 86. The screen in the BRZ is smaller at 6.2 inches, while the 86 has a 7-inch touchscreen installed. Unfortunately, neither of the cars have Android Auto or Apple CarPlay, so you are left hanging in that department.

The Toyota 86 and the Subaru BRZ are classified as sports cars, so it is natural to assume that they go fast and really fast indeed. Both the cars have similar engine performance figures, but the BRZ has a slight advantage over the 86 when it comes to suspension performance.

Under the hood of both cars is a 2.0-liter four-cylinder boxer engine usually found in Porsches. This engine is connected to a six-speed manual or automatic transmission to produce 205 horsepower or 200 horsepower. Power goes straight to the rear wheels, well-balanced thanks to the hard sports suspension.

Toyota gives buyers the choice of opting for the Toyota Racing Development (TRD) package that enhances the handling of the 86. Subaru, on the other hand, has better control straight from the factory. Brembo brakes are also installed to help stop the vehicle abruptly in emergencies.

Both the BRZ and 86 have the same warranty periods. Warranty is the most important aspect to look at, especially when buying a brand new car. It helps you to keep your car fresh and new.

Owing to similar engine specifications, both the cars have a similar fuel economy. However, Subaru has been able to extract more fuel efficiency from the BRZ mainly because of the suspension.

We have shed considerable light on both the vehicles, and it should be clear now that both the cars are absolutely the same except for some minor changes in each.

But what should you buy if both cars are the same? Well, the answer is simple – Do whatever suits you.

Maybe you are Toyota loyal or a Subaru loyal. In that case, you would go for your favorite model. But if looked at logically, the Subaru BRZ is a better choice due to its better fuel economy and a lower starting price.