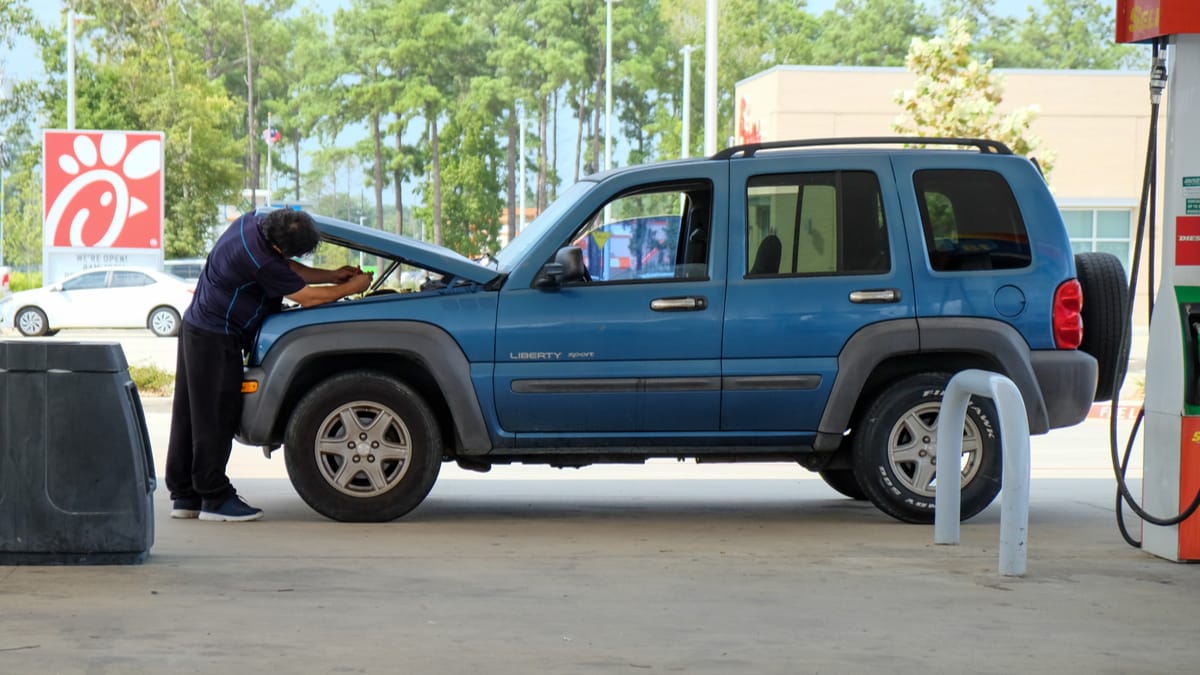 You’ve just filled up the gas tank in your car, and you are ready to hit the road, but the engine won’t start.

What does this mean, and what should you do? While you might be panicking, there are some valid reasons the car won’t start after getting gas.

In this article, we evaluate the various reasons why the car won’t start after a fill-up. We also look at what it means to get bad gas and how you can avoid it.

The most common reason why a car won’t start after getting gas is due to an EVAP purge control valve stuck open. This will cause the fuel vapor to get pushed into the intake manifold. Other common causes are a bad battery, a clogged fuel filter, or a bad fuel pump.

Here is a more detailed list of the reasons why a car won’t start after getting gas:

The most common reason your car won’t start after filling gas at the gas station is due to an EVAP purge control valve stuck open. When you fill the tank with fuel, the overpressure of air needs somewhere to go and it can be tight with the fuel nozzle. Therefore if the valve is stuck open, it will get pushed directly into the intake manifold.

This will cause too much fuel to enter the combustion chambers while cranking the engine after a refill and this will cause your car to be difficult to start.

You also want to ensure there are no leaks in the EVAP system and that the system is not clogged, which can result in the same issue as with a bad purge control valve.

If the battery has died or if the connections are loose, your car won’t get the starting power it requires. The majority of car batteries last between three and five years, plus there are warning signs that it is starting to fail.

If the lights seem dimmer or you are having trouble with the accessories, you may want to replace the car battery before it dies. You should also check for corrosion often and clean it off with a baking soda solution to ensure the connection is strong.

If you need to jump start the battery to get it moving, push the car away from the fuel pumps. You don’t want to do anything near the pumps that could create a spark.

The fuel filter keeps contaminants from reaching the engine. It cleans out the debris and dirt from the fuel. Over time, these contaminants build up in the filter, causing a blockage.

Before this problem keeps you from starting the engine, you should notice other symptoms. Performance slowly degrades and fuel efficiency decreases. Once the filter becomes totally blocked, the engine won’t be able to get the fuel needed, causing a no-start situation.

Most manufacturers suggest changing the fuel filter as part of regular maintenance. You might need to change it every 20,000 to 30,000 miles, based on the recommendations in your owner’s manual. It’s also important to use top-tier fuel to keep the system clean.

The fuel pump is submerged in the gas tank, ensuring it runs at cooler temperatures. If you allow the fuel level to drop too low, the pump can overheat and become damaged.

To move the gas into the engine, the fuel pump must be functional. However, the failing fuel pump is also going to provide you with other symptoms before it gives out completely. If the engine sputters while driving at high speeds, you hear a whining noise coming from the tank or the vehicle continues to stall, the fuel pump might be to blame.

To diagnose a bad fuel pump, you will need to check the pressure with a gauge. This can be a complicated task, just as replacing it often proves to be.

If the starter fails, you won’t be able to crank the engine. When you put the key in the ignition and turn it, the starter motor is what activates the engine. If this is the problem, you might also hear a clicking sound if you attempt to turn the key.

Thankfully, there are tips to get the engine moving with a bad starter. You could try banging on it to help it get past a dead spot. If you drive a manual transmission vehicle, you could also try bump-starting the engine.

There are times when you may replace the car battery only to have the same problem. Even though it appears that the battery has died again, it could be a faulty alternator instead.

The alternator is responsible for charging the battery while the engine is running. If it isn’t working, the battery will die prematurely.

You can use a multimeter to check the health of the alternator. With the engine off, test the battery voltage. The reading should be between 12.5 and 12.8 volts. While the engine is running, you want to take another reading. However, this time it should show a significant increase. If not, it’s time to replace the alternator.

Spark plugs are needed to ignite the fuel-air mixture inside the engine. When a plug fouls or becomes contaminated, the engine might misfire at first. However, this condition can also cause trouble starting the motor.

Spark plugs are only one part of the ignition system that could be to blame. There are also spark plug wires to think about, as well as the ignition module, circuit and switch. To prevent problems, you should change the spark plugs based on the service recommendation outlined in the owner’s manual.

It can be overwhelming and embarrassing to sit at the gas pump and have trouble starting your car. However, it’s important that you remain calm and level-headed, so you can make the best decisions. Here are a few steps that might help you out.

If you aren’t sure how to resolve the problem, you want to reach out for some professional support. Don’t take on more than what you are capable of or you could risk causing further problems.

There’s always the chance that the gas you put in the tank was bad. “Bad gas” means the fuel can’t combust as it should. When you put bad gas in the tank, it might create a rough idle, stalling issues, or pinging sounds. It could also force the Check Engine Light to come on and create trouble starting the car.

Gas contamination can occur at the refinery or during transportation to the fuel station due to low gas quality. There could also be a high water content because of improper storage. Water infiltrates the system when the fuel is placed in a corroded tank or when the cap is unsealed. Sadly, bad gas can cause a dangerous buildup in your car’s engine, leading to permanent failure.

To avoid putting bad gas in your vehicle, make sure you always visit a reputable station. It’s best to purchase the fuel from top-tier stations that are held to a higher standard. If you think you have gotten bad fuel, don’t visit that station again. Additionally, you always want to use the proper octane to keep the engine running as it should.

Why does my car sputter after getting gas?

It’s possible that your car is sputtering after getting gas because you’re not using the right type of fuel. Another possibility is that there’s something wrong with your fuel system. If your EVAP purge control valve is bad, fuel can get pushed into the intake manifold.

How do you prime a fuel pump after running out of gas?

Modern gasoline cars use an electronic fuel pump, which will build fuel pressure within seconds after you turn the ignition. So to prime a modern gasoline car, you just have to turn the ignition and wait a couple of seconds.
Diesel engines can be more difficult and you may need to cycle the ignition a couple of times to build pressure. If your diesel car does not have a pump in the tank, it makes the process much more difficult.

Can bad gas make my car not start?

Yes, bad gas can make your car not start. When the fuel in your car’s tank doesn’t burn correctly, it can leave a sticky residue on the parts inside your engine. This residue can cause your engine to misfire and prevent it from starting. If you think you may have bad gas, take your car to a mechanic and have them test it. They’ll be able to tell you if the problem is caused by bad gas and will be able to clean out the residue so that your car starts up again.

Why does my car shut off when I put gas in it?

There can be several reasons why your car shuts off when you fill it with gas. It could be something as simple as a bad EVAP purge control valve, which causes fuel to be pushed into the intake manifold during refueling. In any case, you should not refuel with your engine running, but the problem must be fixed.

If your car won’t start after getting gas, there are a few things you can check before taking the car to a mechanic for an advanced diagnosis. The first thing you want to diagnose is if the EVAP purge control valve works. You also want to ensure there are no leaks in the EVAP system and that the system is not clogged.

The main reasons a car won’t start after getting gas include:

If you checked all the possible solutions above, but still can’t figure out what’s causing the issue, then you’ll probably need to call for help. But don’t worry – with a little troubleshooting by a professional mechanic, you should be back on the road in no time!