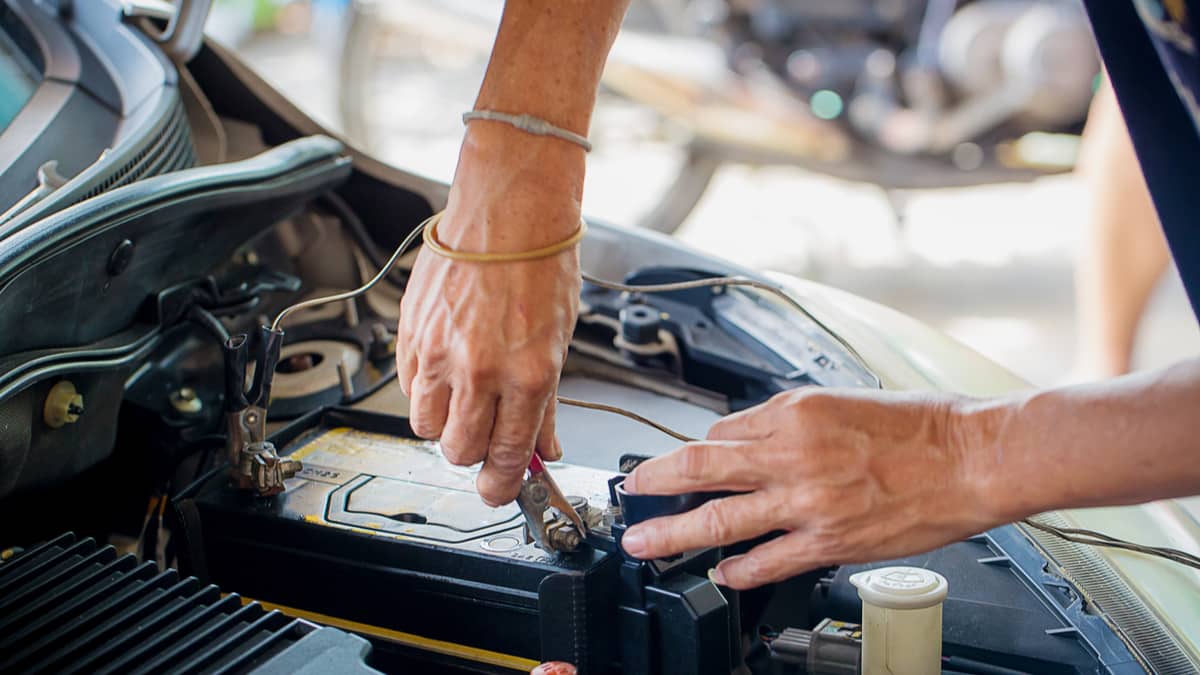 If your car wouldn’t start, you may have automatically assumed that a dead battery was to blame. So, what do you do when the car won’t start after replacing the battery? The first step is to figure out what is causing the problem.

We look at all of these causes to help you determine what’s going on. Our guide also determines how to diagnose the problem for a quick fix.

If your car won’t start with a new battery, you may have installed the car battery wrong or there could be an excessive amount of corrosion on the connectors. Aside from this, a defective starter or a seized engine could be to blame.

Here is a more detailed list of why your car won’t start with a new battery.

If you put a brand-new battery under the hood and it still isn’t powering the car, you need to check the installation. Did you clamp the cables down tight and are they in good shape? If not, the battery won’t supply power to start the car.

Additionally, it’s important for the positive cable to be in good condition, down to where it meets the starter. Further, the battery must be compatible with your vehicle. Car batteries aren’t universal. You need a particular size and capacity to start the engine in your vehicle.

You can’t expect the current used to start a four-cylinder motor to provide enough juice for your heavy-duty pickup truck. If you are unsure what battery you need, check the owner’s manual.

Battery corrosion occurs over time on the terminal posts and connectors. Corrosion is caused by the hydrogen gases that are released from the battery acid.

If the corrosion becomes excessive, it can interfere with the connection. In extreme cases, enough corrosion can prevent the car from starting.

If there is power to the car and the lights turn on, but you can’t get the engine to start, you might have a different problem. It’s possible you diagnosed the dead battery incorrectly.

A defective starter can create a growling sound when you try to start the vehicle. It can also lead to an absence of sound at all.

Another possibility is that the engine is seized and you mistook it for a bad battery. Think back to the last time the car was running and you might notice some symptoms of an engine that’s failing.

You could have noticed a burning smell or smoking. There might have also been unusual engine sounds, such as a knocking or tapping.

If you were able to get the car started after installing the battery, but it didn’t last long, the alternator might be to blame. Installing the fully charged battery might have given you the power needed to get down the road, but it won’t last if the alternator doesn’t recharge it.

This is one of the most common mistakes, replacing a battery when the problem is really with the alternator. That’s why it’s important to properly diagnose the dead battery before making a determination.

However, it is still a possibility and to fix it you need to visit a mechanic or someone with the right tools for a calibration. It could also be an issue with missing information to the immobilizer.

How to Fix Car Won’t Start After Replacing Battery

Your first step must be to check the battery. Start by looking at the connections to make sure everything is secure. You also want to verify that there’s no corrosion on the connectors. If there is, use a mixture of baking soda and water to clean it off. This fix is practically free and the most desired outcome.

If you are using the right battery and all of the connections look good, use a voltmeter to see the status of the charge. It should read 12.6 volts or higher. If it doesn’t, the battery is dead. However, if it is a brand-new battery, you should move on to the next step.

If you look online to get an alternator check, there are tons of people willing to give advice. Many publications will tell you to unplug the positive connection while the engine is running. If the car continues running, there’s nothing wrong with the alternator. However, this is a poor way of checking the alternator and it could actually cause damage to the car’s electronics.

Alternator replacement could cost between $450 and $700. The majority of this expense is typically for the parts, ranging from $400 to $550, while the labor might add $50 to $150. In most cases, it’s simple to replace the alternator at home.

If all of the interior lights and accessories work, but you can’t get the car running, the starter should be looked at. There are multiple parts of the starter that can fail, including the motor and solenoid.

Many auto parts stores will test the starter for free. Just remove it and take it to your local participating location if you aren’t sure how to do this yourself.

If the above steps haven’t helped you figure out what’s wrong, it’s time to visit a professional. You could be facing a larger issue and you want to get a proper diagnosis for your vehicle.

Sadly, if the engine is seized, you are facing a hefty repair bill. Expect to pay $2,000 or more for engine repair or replacement.

If the control modules or immobilizer lost its settings, you can expect around $100-$300 for a recalibration.