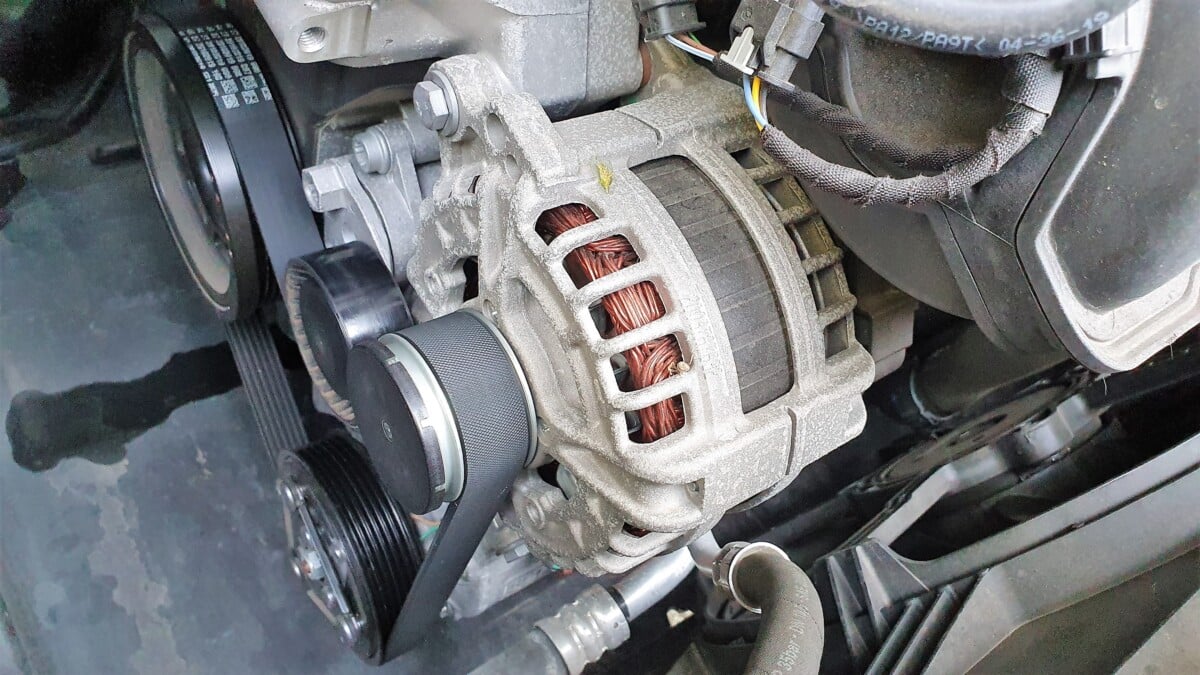 Modern cars have a lot of electric components. To power all these components up without issues, we need a powerful power source – the alternator.

Alternators in cars are not only used to charge the car battery but also to power the entire electrical system of your car, including lights, stereo, ignition, and much more.

But how can I know when it is time to replace the alternator, and how much does it actually cost? Let’s begin with some common signs.

Symptoms Of A Bad Alternator

The most common symptom of a bad alternator is a battery warning light on your dashboard. You may also notice flickering headlights or starting issues. If you hear a noise from the engine, it can definitely come from a bad alternator

While you now know the most common signs, let’s take a look a little bit more in-depth into the symptoms. Here is a more detailed list of the signs of a bad or failing alternator to look for:

If you have checked all your warning lights on your dashboard while the ignition is on, but the car engine is not running, you have probably noticed a warning light with a car battery.

This battery light will light up with two conditions – If the ignition is on and if the battery power is over 13 volts. Usually, your car battery has 12 volts, and when the alternator is charging, you will have around 14.2 volts in your system.

If the voltage in the system drops below 13 volts while the ignition is on – the battery light will light up on your dashboard, meaning that your alternator is not charging properly.

2. Headlights are dim or flickering

The headlights are one of these very high power consumers in your car that requires a lot of electricity. The more power the headlights will have, the brighter they will light up.

If your alternator is bad, the voltage will drop, and they will dim. If you have noticed that the headlight seems to be worse than before, your alternator might be a problem.

You might also notice flickering headlights caused by an unstable voltage from the alternator.

Newer cars often have LED headlights, and in these cars, you will not experience a dim effect of a bad alternator, but they might shut off completely instead.

Every time you drive your car, the alternator should recharge your car battery fully, so the next time you are parking and starting your car, it should have full power.

However, if the alternator is going bad, it might not charge it fully every time you drive.

If it is charging it a little bit under a fully charged car battery every time you are driving – you will finally come to a point when the car drained more power than it charged. This is when your car will not start in the morning anymore.

If you notice that your car feels tired every time you start it, it might be a problem with your alternator.

Your alternator contains bearings and other spinning electronic components. If your alternator got physical damage, you might hear loud squealing or banging noises from it.

The most common problem is a bad bearing inside the generator, which will cause a scratching noise from it. Usually, alternators are pretty easy to see from the engine bay, so it is also easy to open and listen if you can locate the alternator’s noise.

However, in some car models, the alternator might be located far down in the engine bay and difficult to listen for noises. In this case, you should maybe contact a professional mechanic.

If you are charging the car battery often, but the battery of your car is continually drained, even if it is in good condition, this also means that your car’s alternator has probably.

There can be a lot of reasons why the alternator will not charge the car battery properly. You can find more information about it in our other article: Alternator not charging causes.

When an electric component lacks voltage, there could be many strange issues, and as you already know, modern cars have thousands of them.

So, of course, low voltage caused by a bad alternator may cause a lot of strange symptoms both inside and outside of your car. If you think your car is haunted, it is definitely time to check the alternator.

Depending on the number of poles, the rotors, the output power, the operating phenomenon, the speed (revolutions per minute), the type of coil, and the type of assembly, different generators are available on the market.

Repairing an alternator is generally not preferred (because of the high repair costs), so a new alternator should preferably be installed. A new alternator can cost you $150-$400 plus labor costs.

The main symptoms of a bad alternator include: