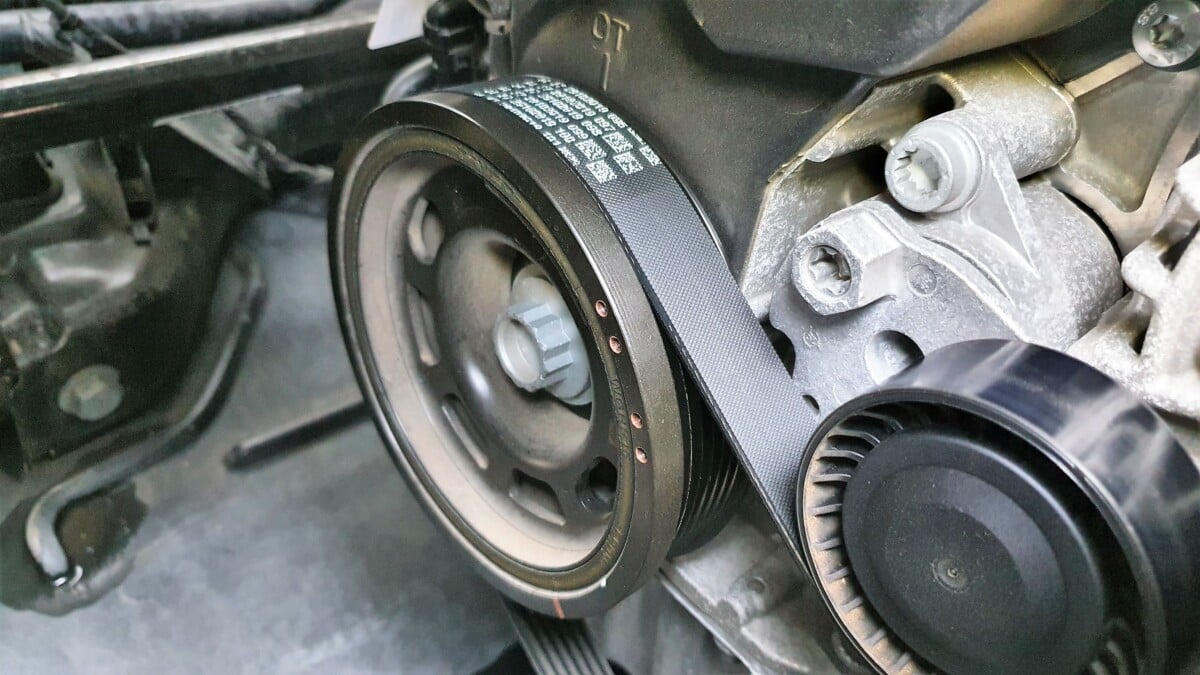 With so many working parts on and around the engine, it can sometimes be difficult to figure out what part is going bad, as many symptoms are related to multiple components. That’s the case when you have a bad crankshaft pulley or a bad crankshaft harmonic balancer.

We review the signs of a bad crankshaft pulley, its location, function, and replacement cost. Here’s a quick overview of the signs to look for.

Symptoms Of A Bad Crankshaft Pulley

The most common symptoms of a bad crankshaft pulley are engine vibration and irregular engine idle. It may also result in a damaged alternator, power steering pump, or a failed transmission if you are unlucky.

Here is a more detailed list of the signs of a bad or failing crankshaft pulley to look for:

The most prominent symptom that something is wrong with the crankshaft pulley is engine vibration. This will be the first sign you notice, as long as you are paying attention.

The crankshaft pulley is often equipped with a harmonic balancer. This component absorbs vibration from the engine, allowing you to accelerate smoothly. However, when the balancer fails, vibrations are no longer absorbed.

This defect causes noticeable shaking that gets worse the faster you go.

As you sit in your vehicle parked, you become familiar with the sound of the idle. When something seems off, it could be related to your crankshaft pulley.

Irregular engine RPMs are common with a bad crankshaft pulley because the dampener is put under more pressure, especially while idling. You might notice that the engine RPMs fluctuate all over the place.

You will notice signs that look like you have a dead car battery. The lights might flicker and you won’t be able to start the vehicle for long since the battery can’t be charged.

RELATED: 8 Causes of a Car Battery Light On While Driving

The car’s power steering pump is also powered up by the crankshaft pulley. This vital component pumps hydraulic fluid into the system so your steering works the way it should.

When the power steering fails, it will require much more effort to control your vehicle. You might think that the system is low on fluid, but a simple check will show that’s not the case.

If you allow the engine vibration to occur long-term, it will lead to transmission or internal engine damage. It can wear out the crankshaft bearings if you are unlucky, and your car’s transmission has a lot of parts that aren’t made to handle that type of vibration. The gears, input shaft and bearings are all susceptible to damage.

When the transmission starts to fail, you might notice trouble shifting, whining sounds and leaking fluid. This is not something you want to deal with simply because you had a bad crankshaft pulley.

The car engine operates from the power given to it from the fuel. Then, this power is delivered to other components through the use of various electrical and mechanical systems. One of these mechanical systems is the crankshaft pulley, which is responsible for power distribution.

The crankshaft pulley powers all of the components connected to the crankshaft. While the crankshaft will drive the car wheels, the pulley transmits power to other parts, such as the alternator and power steering pump.

The crankshaft pulley includes an internal dampener, responsible for decreasing vibrations running along the pulley belts. If left unchecked, these vibrations can cause damage to the systems that are connected.

So, what causes a crankshaft pulley to go bad? Even though the part is designed to last the lifetime of your engine, it can fail easily. Most models have a rubber isolation ring that breaks down when exposed to high temperatures, which happens naturally because of the engine. Plus, if there is a coolant or oil leak that gets on the pulley, it can contaminate it and speed up deterioration.

While the crankshaft is responsible for converting straight or linear movement to the pistons, the crankshaft pulley connects to several other components through the use of accessory belts.

The crankshaft pulley replacement cost is between $350 and $400, depending on the car model and labor costs. You could spend $200 to $240 for a new crankshaft pulley, plus about $150 for labor.

If you purchase an aftermarket crankshaft pulley, you could save yourself a little money. Additionally, luxury cars might cost slightly more overall.

If you wanted to replace the crankshaft pulley yourself, the job isn’t that complicated.

The main symptoms of a bad crankshaft pulley include: