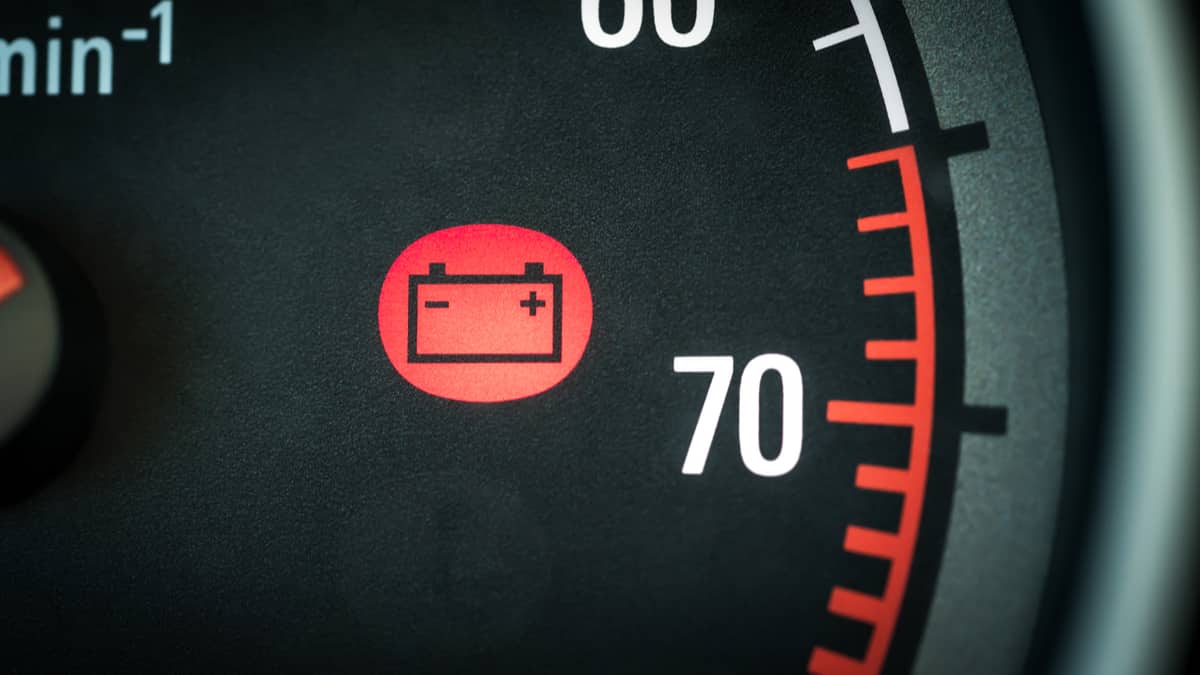 Many people assume that the car’s battery is the only thing that powers all electrical components in the car.

But this is not true. The alternator plays a vital role in supplying power to the car’s AC, recharging the battery, and ignition.

When your alternator is faulty, the battery power is drained fast, and you will find yourself with a stalled car. But what can cause the alternator to go bad and stop charging the battery?

Causes of Alternator Not Charging

The most common reason why an alternator is not charging the battery is due to worn carbon brushes or a damaged alternator itself. It can also be caused by a blown fuse or bad wirings. If your serpentine belt snapped off, the alternator will, of course not charge then either.

The most common reason why your car is not charging the battery is actually because of a worn-out or damaged alternator.

You can carefully tap it with a hammer while the car engine is running while checking it with a multimeter on the car battery to see if the voltage is changing.

If the voltage change and go back to normal when you tap it lightly with a hammer while the car is running – the Carbon brushes are worn out and needs to be replaced in the alternator, or the whole alternator.

Sometimes there is an electrical problem in the alternator, and even if the voltage does not change, it might be damaged.

Another common cause is bad diodes or a voltage regulator. You might need some knowledge about alternators to replace these in most cases.

It was more common to replace parts inside the alternator like the carbon brushes, diode plate, or voltage regulator on older cars. Nowadays, alternators are quite cheap, and mostly it is more worth replacing the whole alternator.

If you have already replaced it with a brand new alternator, but it’s still not charging the battery, you should keep reading in this list.

A closer observation of the alternator will reveal a pulley and belt system that works to convert mechanical energy into electrical energy.

The serpentine belt powers the alternator, and if it fails, the alternator will stop working the moment your belt wears out and breaks, or the pulley becomes damaged.

This can also happen if the serpentine belt is not tightened correctly. Most cars have automatic tensioners, but these can fail, so it is better to double-check.

Some older cars have manual tensioners, and in this case, you might have to tighten the serpentine belt.

The serpentine belt and pulleys are often pretty easy and cheap to replace.

There is often a huge fuse connected to the alternator’s big power cable. It is often an 80A fuse or more and is most often found in your car’s fuse box in the engine bay.

Fuses blow up due to a power surge, or they wear out. When this happens, the current will stop flowing from the alternator. The solution is to check your car’s manual for the particular fuse that controls the alternator and replace it.

In some cars, you might also find another small fuse to the alternator’s control—usually a 15A to 20A fuse.

An alternator does usually has 3 or 4 wires to it to function properly. You will find one big main cable together with two or three small ones.

All these wires are important for the alternator’s function, and if one breaks off – you might lose the charging function.

Check the big power cable connectors between the alternator and the car battery to ensure there is no corrosion there. You can usually find that the cable will get warm if there is a bad connection somewhere.

Check or measure these wires with a multimeter. Remember that measuring them is not always correct because you have to load test wires that are half broken or have a bad connection.

You should usually have 12 volts on one of these wires, and the other one goes to the battery light on the dashboard. If you have a 3rd one, it does often go to the engine control unit. To measure this properly, you need a wiring diagram of your specific car model.

The alternator and the car’s battery work hand in hand. A really bad car battery might actually not take care of the charge from the alternator, which will cause the alternator not to charge at all.

In theory a car can run only with the alternator charge, but this can cause heavy voltage spikes and other strange symptoms so this means that a bad car battery can cause an alternator to not charge also.

Cars are increasingly coming with modern electronics. In this regard, the engine control unit (ECU) controls most of the car’s electrical components.

Modern cars also control the alternator. In some rare cases, there might be a problem with the engine control module not controlling the alternator’s charging.

Check for any trouble codes with an OBD2 scanner to determine if anything is any other damaged part that prevents it from charging.

In some rare cases, there might actually be a faulty engine control unit. But always check all other possible causes first.

Diagnosing an alternator that won’t charge

There are some easy steps you can go through to check the function of your alternator.

Is there a fuse for the alternator?

In most car models, there is a high-amperage fuse between the alternator’s terminal and the battery. You may also find low amperage fuses for the alternator ignition terminal. However, it is not very common for these fuses to break, but it is definitely worth checking.

Can I test my alternator without removing it?

How can I test my alternator without a meter?

How long will a car run with a faulty alternator?

It depends on how bad the generator is, how many electrical consumers you use and what car model you drive. If your car battery is fully charged and the alternator is not charging at all, you can expect to drive about 15 miles or 15 minutes until the car stops.

There are many possible reasons why an alternator won’t charge. However, the most likely cause is a problem with the alternator itself, the drive belt, or the connection between the battery and the alternator. If your alternator is not charging, your car will stall when the battery is drained, so it is important to fix the problem as soon as possible.

The most common reasons an alternator is not charging include:

If your alternator is not charging, there are a few things you can check before taking it in for service. First, make sure all connections are secure, and there is no corrosion between the alternator and battery. Next, check the drive belt to see if it is loose or broken. If everything looks good there, it’s time to take it in for service if you feel you don’t have enough knowledge for a proper diagnosis.