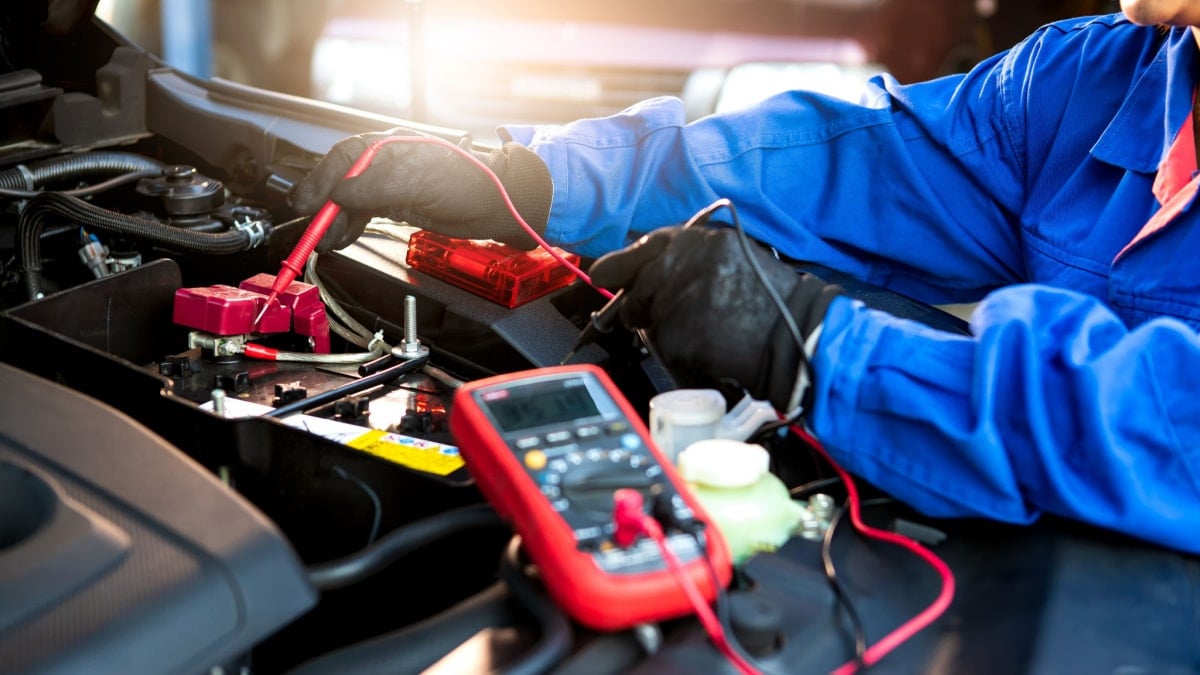 If the car battery keeps dying, your problem might actually be the alternator instead. By learning how to test a car alternator, you can figure out what’s going on, so it can be quickly fixed.

In this guide, we discuss the importance of the car alternator and show you how to test it. We also show you signs that the alternator is dying and evaluate the cost of replacing this vital automotive part.

Table Of Contents show
How to Test a Car Alternator with a Multimeter
Prepare the Multimeter
Start the car engine
Locate the battery
Probe Battery Terminals
Evaluate Reading
Alternative Ways to Test a Car Alternator
1. Screwdriver
2. Test Light
3. Auto Parts Store
What is the Car Alternator?
Signs of Failing Alternator
1. Dead Battery
2. Battery Light
3. Malfunctioning Lights/Electronics
4. Burning Smell
5. Stalling Engine
6. Strange Sounds
Cost to Replace Alternator
Frequently Asked Questions
How do you know if it’s your alternator or battery?
Can you test an alternator by disconnecting the battery?
Can an alternator drain a battery when the car is off?
How do you start a car with a bad alternator?

How to Test a Car Alternator with a Multimeter

RELATED: Alternator Not Charging? (Here’s How To Fix It)

If you don’t have a multimeter and you don’t want to disconnect the battery, a simple screwdriver can help with diagnosis. Turn on the key until it reaches the ON position. Just don’t start the car engine.

The test light is a cheap tool that can show if there’s power flowing through a part. You can use it to test the alternator.

Sadly, it’s not going to offer a lot of information other than that the alternator hasn’t completely failed. If there’s any amount of power, the test light will activate.

If you don’t feel like diagnosing the alternator yourself, you can take it to a local auto parts store. Most of the nationwide chains offer free diagnosis.

The only trouble with this method is that you must first remove the alternator. For the team to bench test the alternator, it has to be removed.

What is the Car Alternator?

The automotive alternator operates just like a standard generator. It’s found at the front of the car engine and it’s powered by the vehicle’s serpentine belt.

The main role of the alternator is to provide electricity to the vehicle, thereby running the accessories and features while the car engine is running. It also recharges the battery during a drive. Every car with an internal combustion engine and most hybrids contain an alternator.

Because most people don’t understand what the alternator does, they change the battery out, assuming that’s what’s wrong. Once the new battery dies, it becomes more evident that the problem was actually the alternator.

On your car’s dashboard, you have many lights that tell you when something is wrong. There’s also one for the charging system, closely resembling a battery.

When the battery warning light comes on, it tells you that there’s not enough charge getting to the battery. This light could come on just before the battery dies, so you may not have a lot of time to respond.

The same situation can occur with the car’s electronic equipment. Whether you are trying to use the car stereo, air conditioning or power windows, you might notice everything starts to malfunction as the alternator fails.

However, the alternator can also fail and lead to damage to the serpentine belt. Either way, this belt damage often creates a burning smell. If you smell fire, it’s best to pull over in a safe spot and shut off the car.

When the alternator doesn’t keep the battery charged, the car will stall. It might not start back up either unless there’s enough juice left in the battery.

On the other hand, if the car starts but keeps stalling, you are dealing with other issues. You may have a fuel system malfunction or need to change the spark plugs.

The failing alternator can make a variety of sounds, none of which are normal. For example, if there’s an issue with the serpentine belt, you will hear a whining sound.

As the alternator fails, you will hear a piercing, high-pitched tone. There could also be a knocking or grinding noise if the problem stems from the bearings inside the alternator.

On average, you might spend between $150 and $500 for the alternator replacement. Starting with parts, you could spend $75 to $250 to purchase an aftermarket alternator, while the OEM option is going to cost more.

If you can change the alternator yourself, you may only need two to three hours to fix the problem. If you aren’t familiar with the standard alternator replacement, you will have to pay a mechanic. This charge is going to depend on where you take it for service and what type of car you drive. On average, you can expect this price to be around $75 to $250 to have it professionally fixed.

On top of that, the failed alternator might not be your only problem. During the installation or diagnosis, it might become evident that other parts need to be replaced. You could also need a new battery or serpentine belt in the process, both of which will add to an increased price.

How do you know if it’s your alternator or battery?

Can you test an alternator by disconnecting the battery?

It is definitely not recommended to disconnect the battery to test the alternator, but it works and is an old way of testing the alternator. However, there is a high risk that you could cause voltage spikes by doing so which could damage expensive electronic parts.

Can an alternator drain a battery when the car is off?

How do you start a car with a bad alternator?

To start a car with a bad alternator, you need to jump start the car. But if the alternator is bad, the car will soon die again when you remove the jump starter or jumper cables.

RELATED: 6 Symptoms of a Bad Car Battery, Location, Function & How to Test it